A Single Man, by a singular one. 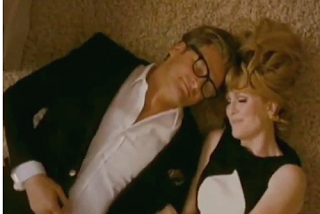 A Single Man by Christopher Isherwood has been somewhat transcribed by Tom Ford. The story is somewhere within layers of styling, endless stretches of moody soundtrack, impossibly stylish settings and objects. The original story revolves around a day in the life of a man who's lost his lover and goes through life devoid of any center or purpose. Colin Firth and Julianne Moore are the stars of the film and carry it all off with panache, heart and style. I would have said soul, but I think style outweighs soul in Ford's hands. He takes artistic license with the plot, as well, which alters the arc of the narrative even more.

I went into the film having read reviews, the original story and also having listened to an NPR interview with Tom Ford. My expectations were high and I wanted to love it. From the first moment, I felt as though I was in a universe hovering between the shooting of an ad or the filming of a commercial. Besides a dead body in the snow with clouded, open blue eyes, we're shown the approach of a character in the snow wearing a Saville Row perfectly cut suit and hand made shoes. That's a lot to take in in the first 5 minutes. I turned to my friend and commented on the beauty of the shoes. They stole the thunder of the corpse with the clouded, glazed, staring blue eyes. The music swells and despite the cold of the setting, it was an over heated moment that dragged on. Much of the film drags in that same self conscious way. God is usually in the details, but Tom assumes the character of God in this story.

The look and sizzle of the film are in the surfaces. Granted, Colin Firth could have played his role with only his eyes. He could have done it without ever having opened his mouth. His eyes were so expressive communicating every thought, feeling and pain of loss. He just looked too damn good, EVERY SINGLE MOMENT. Julianne Moore, his best pal and neighbor, with a world weary, martini- fuelled English accent, was a visual treat. She wears a very loosely coiffed up-do that spills and falls away with every turn of her head. There's a metaphor in there somewhere but jet lag is impeding my normally razor sharp insight. Suffice it to say, she swans around her living room and terrace with Colin drinking stylish drinks: gin, bubbly, what have you, with an Elsworth Kelly painting sitting casually on the mantle. The jewels are very impressive in a "who cares" sort of way. It's all so chic. That includes his Mercedes Roadster,a Richard Neutra house of glass and teak,all displayed with little back story except that he teaches in a nondescript college in L.A. We learn through Ford's interview that George (ColinFirth) is possessed of independent means and, therefore, lives a charmed life. It's curious though, because the questions start surfacing in the first moments and we're left to parse them out for ourselves. One needs the NPR interview to really get the story behind this story.

So branding is something that swallows this story whole. Ford is a perfect director in that he is obsessed with detail. Nothing is left to chance. It is both a wonder and a weight. If he had gotten out of the way and let the story unfold, it would have felt more authentic. I felt that he'd co-opted Isherwood's novel and overlaid an ad on it. It felt more vehicle for Tom Ford returns, than the telling of a story. There was little subtlety in the film, unless by oversight. The end was the most satisfying part of the film. I won't reveal it , but it helped balance so much else that was top heavy. Ford could be great if he would let go. There's little in him that is spontaneous. Every pose of his for the camera is choreographed; chin down and tilted to his left shoulder. The film was just as stilted. The love story that is the heart of the piece comes through, but only after you've cleared away the custom-tailoring, starched matching shirts, perfect loafers, Buccelatti bracelets, Danish Modern furnishings, Mid-century Modern everything, and Bijan-ish knick knacks. I found myself wishing that we lived in a similar way: intimate dinners at home, playing records to dance to, and laying on the floor poring out our souls to our really close friends. There was something so static in the film's elegance that made me restless.

Yes, I liked it. I've thought about it a few times since. It was last Thursday night, the coldest night to date in NYC this winter. It was a chilly experience inside and out. Listening to Ford speak about the making of the film and his approach to design was as arch and contrived as listening to Madonna speak in a mix of American and English accents. It may be a small and in some way petty observation, but one that spoke volumes. It's a visual feast, but you may feel as though you need to eat a real meal after.....one that sticks to your ribs.
Posted by Fluff Chance at 5:09 AM

The visuals you describe sound blissful . . . and if the soundtrack's any good . . . will see it in my local cinema with a vodka martini in the cupholder (my local cinema is very civilized in that way).

At least you got a chance to write about the film after seeing it, the rest of us will have to wait until it's released. I can't wait to see the movie myself because after all most movies are styled to bring another aesthetic into movies to make up for the story line.

That's why I love the classic movies, I'm in a trance just by watching the set designs and clothing designs alone. Did he do the author justice in his interpretation?

I've got to read this book and after reading so many fashion magazines who have spoken of the movie, got me thinking about author, James Baldwin and who would possibly bring his life to the silver screen? I'm sure he had some very fashionable friends and fascinating escapades when he lived in Paris.

ha - i still want to see it though! To spend 2-odd hours watching a world made beautiful and perfect through Tom Ford's eyes, i'll gladly pay my 10bucks, sit down and shut up.
With regards to your last post, Fluff - thank YOU for writing with such wit and honesty about an industry that frequently needs blinding light shed upon it. Your blog is one of the best things that I have discovered all year, and I hope that you will continue to write and muse on into 2010 without too many 'paws's' for thought!
If Vogue doesn't feature you in their blogger issue, it'll be the most heinous fashion-crime of the new millenium.

Duly noted,thanks for the review.I want to see it before the New Year......

I listened/watched some of the reviews and went in expecting little.
I came away moved and touched.
True I had not read the book and could not identify all the accoutrements (probably an advantage).
And true Colin Firth could read the phone book and I'd be moved..
Still I found it poignant..

What does one expect from a Tom Ford production ? I wonder why people think they can direct a movie without any real experience. Why not a short, a silly film, before the big leap? Everyone must start someplace.

Thanks for the review, it adds to what I think of the film, though I haven't seen it yet. After watching the trailer and some interviews with Tom Ford I was pretty sure that every detail would be thought over.

Thanks for the review Fluff! I don't care if it's melancholy and monotone - I want to see it just for the eye candy. I did hear that Colin Firth deserves and Oscar nomination for this role though. Can't wait to see it.

why does ford speak like that? did he learn to be a bit affected in santa fe? merci for the heads up and cannot wait to see it...colin firth is divine, brilliant and so handsome...swoon
happy new year!

Beau ! I can't figure out where that speech pattern
originated. When I met him 15 years ago or so
he spoke like you or me. I guess that is a result of
too much of a good thing. It doesn't have the truest
ring to my ears. He sounds like a kid from prep school
but forgot school let out 36 years ago. But what do I
know... I wasa day student and a faculty brat to boot.
Fluff

Well, someone is naked more than once, but it's likely Firth's implausibly toned butt double.

Great review. Every review I'd read gives the nod to Firth for a superb acting job --the media's consolation prize for darling Ford's otherwise immaterial movie. But can we give it even that?

On one hand, I want to decry how Ford made this movie for himself and only himself. Every shot had an indulgent, I've-always-wanted-to-try-this feeling.

But then, don't we all kind of live like that, with smaller budgets and no audience?