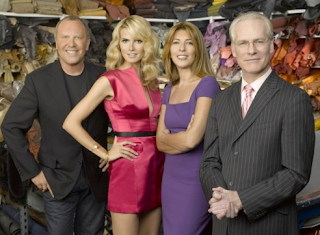 On Friday as I waited to get the hell out of town, I stumbled onto Project Runway's debut episode. I'll try to be brief. Someone told me I'm too chatty, and it has stuck in my brain, so I'll try carving my way to the heart of this. I'm not a fan, never have been since seeing the first season's contestants standing around Mood Fabric Store waiting to flag down fans , despite the fact that the season was over a few months before. I thought that was a little sad. I ran into another contestant, not winner, in Savannah on a couple of occasions and he was m 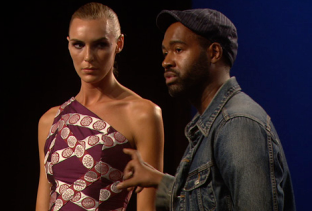 ore grand than Andre Leon Talley (the definition of grand, I mean this in a good way...) with a couple of sweet sixteen and prom dresses to his credit. Way, way over the top. So my faith in the graduates of that University of Tough Love is very skewed. There is talent there for sure, but I don't get what happens to it once it's gone through the KLUMgrinder, been forced down the GARCIAdeflator, tossed and tugged by the GUNNgotron, picked and poked by the KORStrator and then finished off by the loving hands of Nicole Richie. Talk about salmon swimming upstream...that's a stroll in the fish market compared to this forced march.

So the usual antics were in place and the trained and untrained seals had to jump through hoops. The tasks were

challenging and the contestants were generally better than those in the past. There was a flicker of hope at the end of Bravo's crack pipe, but that didn't erase some very tasteless remarks uttered by the "Experts". These remarks stood out more than the mediocre work that came from some, not all of the contestants. Put a group of young and relatively inexperienced designers in cramped living quarters, feed them God knows what, strap a time bomb to their asses and wait for the meltdowns, fireworks and venom. That's the Bravo recipe for success in the fashion world. It's only a step or two

to the side of professional wrestling.

Without too much description, I'll say I was impressed with Ping, Jeneane, Jesus, and even loud mouthed Anthony, from Hotlanta!!! It was the first go round so who's to say what any of them are truly capable

of until the heat gets turned way up. We'll just wait and see who rises and who gets scorched.

Tim Gunn started it off by telling the designer, who actually won the challenge, that no designer in the history of PR had ever NOT completed a garment. This threat was delivered with the most menace and snarl that he could muster. The poor contestant looked ready to wet his pan

ts. I take issue with that statement. I can't tell you how many times I've seen garments trot down that runway that are anything but finished or complete. 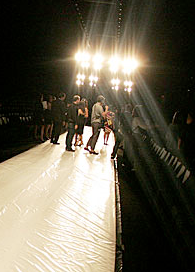 Michael Kors saved some of his most abrasive remarks for a young Black woman, saying that her dress looked glued together(believe me it didn't) and that her model looked like "some Hoochie Mama" who'd walked through garbage. That was a completely thoughtless, racist , callous remark by someone who should know better. I won't go further than that, except to say that his expression is one of a constant grimace. His aviator shades used to bother me, now I prefer that they stay on. At least, his dead eye stare is less obvious. He's a great designer but he' 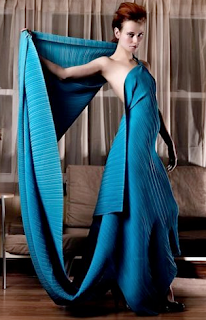 s become a mean spirited man filled with self satisfaction.

Heidi Klum, in her magnificence, spoke for all of the judges to another contestant stating the judge's confusion over whether or not the designer had a sufficient taste level. I guess that was a golden moment in that this confused model/Host was unwittingly showing her hand of straight Jokers.

Nicole Richie was the only one without a destructive agenda. She liked things or didn't in a very natural and subjective way. She wasn't particularly articulate, but her opinions carried more currency that the verbose chatter of the Experts.

When did they become both Judge and Jury? None of them knows remotely what it takes to be a designer except Michael. He's been successful so long, I fear that all empathy and sympathy have gone the way of his past, failed businesses......gone and forgotten.

I have never seen this or other talent search shows. Like all "desire to be seen" driven shows the PR spots are enough to make me stay away. Ripping apart someone's talent because it increases ratings rather than mentoring and/or being honest/direct in a sincere supportive way makes me cringe. Not only are those involved in the show being abused (by choice of course) but those watching are learning how to treat others when giving the opportunity to "help".

I've watched the past 4 seasons, not sure why after Korto was cheated (yes, I said it)...but it really seems to me that it's a platform for idolatry for King Kors and Queen Garcia. The show started off showcasing actual talent but has slowly moved into mass-marketed day wear to be sold in Khols.

Fluff, had to smile about GARCIAdeflator and KLUMgrinder. Absolutely agree on the subject of Kors.Enjoyed reading your post!

I've never understood the show. Just as you point out, who are the clowns doing the judging? Heidi Klum dumbfounds: I think Karl Lagerfeld was correct, Who is this woman?

Dear Anonymous,
I do think Michael Kors is a very good designer. His collections for years have been some of the best of luxury American sportswear. That also goes for the years he designed Celine in Paris. He has a very strong and sure hand. I've enjoyed his work for years. I don't enjoy this new guise, though. I don't find his aesthetic gifts translate to his character on the small screen. Thanks for commenting and taking the time to read the story.

Fluff, I agree about Michael Kors. Wonderful designer BUT people in positions of power who waste the opportunity to mentor and thus CONTRIBUTE to the conversation (which is what people of value do) are wasting their and our time. All they achieve is insignificance and oblivion.

I have always said that if one wishes to understand the theory and practice of Naziism, a few sessions of PR focused on die Klum will enlighten.

I guess I'm the only one who watches this show religiously... it's "fluff" (no offense!) not brain surgery.. but, if I have to choose between it and "real housewives" that are beyond bourgeois vulgarity, uneducated and plasticized, well, this, at least, is the lesser of two evils....
as with all "reality" tv, it follows the formula created by the Real World way back when... the hick, the homophobe, the angry person, the crier, the backstabber, the lunatic... it's standard stuff you can dismiss the after the first 5 minutes...
the judges are there to humiliate people on national TV, the contestants signed up for this, they want their 15 minutes of fame or infamy (there's no distinction nowadays).
Honestly, Tim Gunn has done a good job in past seasons of mentoring the cast. You don't see how much stuff has been edited out. On a previous season, they had an "out take" show and you got to see just how much interaction Tim has with the contestants and, he really does seem to care about fostering new American talent.
The reason I watch the show is that I enjoy some of the challenges that they contestants are put through, like reusing a wedding dress for a recent divorcee, or designing an outfit for a fellow contestant's mother, reusing a dress for someone who just lost lots of weight... it's the thought process (or lack thereof) of the contestants that I find interesting... are any of these people ever going to be the next Halston? doubt it. the only contestant so far with any real talent was Christian Siriano (which I met in person at Supperclub in SF.. what a hoot!)
At any rate, if you find this show awful, how about Launch My Line with Dsquared? oy! Talk about ugly step-sister.
In the grand scheme of things this is entertainment, nothing more... no need to over analyze it.
Now, if, they were to take well-known, established designers (like Top Chef Masters) it would be much more interesting, no?
But that will never happen....
SO, until RuPaul's Drag Race comes back on TV, I'll keep watching....

hi anon again-I did like and buy Kors at Celine but as an american living in Europe for the past 25 years when I see what he sells in HN I find his his own label efforts to be a very poor version of DIOR-they just don't have the crispness of design nor are they as well made.