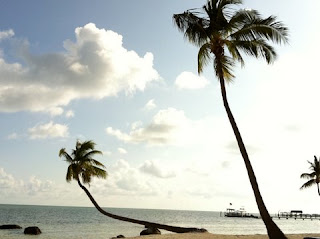 I got down to Islamorada, Florida on Saturday. Leaving NYC in 50 degree weather and landing in Miami just moments later was like a gift. Palm trees and a searing sun was all it took to put a smile on my face. 85 degrees and humidity can be an instant game changer. I brought along a cineplex worth of movies including Eat, Pray, Love which I'd successfully avoided watching til that morning. The crowd in the waiting area was unnervingly gritty. Traveling used to be glamorous. Not anymore. Planes are little more than subway cars with snacks and shitty coffee you have to pa 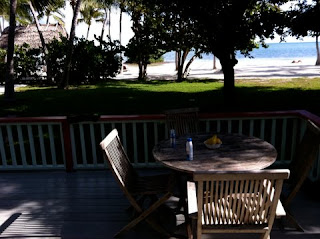 y for. The bookstore in the terminal had a book that elicited a screech. Right next to "Eat, Pray, Love" was a new book I wish I'd written. "Drink, Play, F%@k". As touching as Julia Roberts can be, I couldn't help thinking that "Drink, Play, F%#k" would make a much better film. It would be a great vehicle for.....well, me.

Little did I know that the Moorings Village would be that answered prayer I'd impatiently waited for. All pristine beach and elegant bung 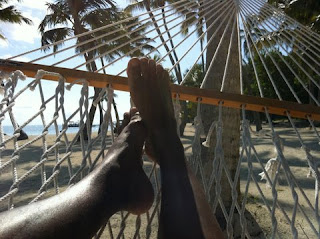 alows punctuated by a forest of palm trees. One palm in particular grew parallel to the beach and rose out over the water. The minute I saw it I felt as though I was running into someone I'd seen before but couldn't place. The mood was quiet and seemed focused on some very distant point. It took a couple of days to down shift but once I did, I couldn't imagine a more perfect place. It felt better than good, it felt right. No computer or phone or TV. Almost no music. Just a little "Namaste Shanti" for good measure and conch whatever. Imagine a spotless beach that has been mysteriously raked, only you never s 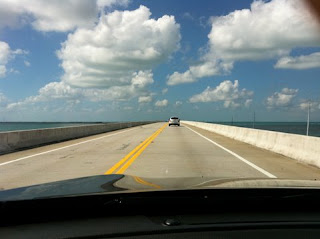 aw anyone do it. Or an Olympic sized pool nestled in a grove of palms with no screaming kids, in fact, no one in sight anywhere. We only saw a few people on the beach in 4 days and they were at a safe distance. From the front porch I could look through the palms, past the hammock and out to sea without anyone or thing interrupting.

That was the case until this morning. Paradise was invaded by a film crew with a string of cheesy blondes in fuchsia bikinis and sprayed on tans. I thought QT had gone the way of red dye #2. It's alive and well on Tiffany from Iowa and BreeAnne from Winetka. They, along with Todd from Colorado were about 30 feet from my front door loudly proclaiming their weight loss secrets to a camera and crew. Hydroxycot had snagged paradise yanking me back to the harsh reality I thought I'd cheated. I 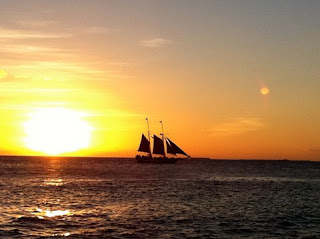 just stood there on the porch staring at about 30 people wondering what the f%@k happened. I guess I'm lucky to have had a few days of peace. This is surely an absurdly lame luxury problem and one to get over butt fast and I have. I packed my toys and headed south and now am sitting at the end of the line in Key West. What a strange and compelling place this is. Even though I bitterly complained of paradise lost I actually stumbled onto a paradise found. It may be just another tra 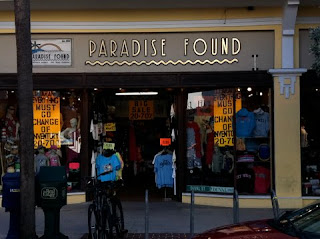 shy t-shirt shop but it works for me. This must be the right place. I could have sworn I saw Marc and what's his name stumbling into the bath house across the street. It was a blur of tattoos and an Hermes Birkin along with a manly scent of pepper.

Fashion never sleeps. Chow!
Posted by Fluff Chance at 11:28 AM

Hey Fluff...long time. Glad you had a good time on vacation. I'm just getting back into the blogs, so I have to catch up, but I see how have some good stuff, as always.

Fluff, I'm going to recommend 'Eat, Pray, F*ck to my book group as an antidote to last months 'Eat, Pray, Love. It was the equivalent of watching paint dry. Navel grazing drivel. Maybe the movie was better??
On a seperate note ADR was Sunday Times Style covergirl and was just a car crash of pile 'em high clothes & accesories. MsG xx