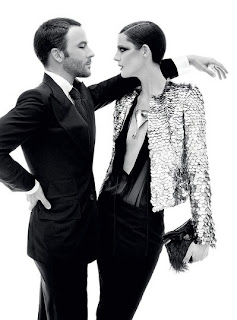 Finally, the top secret images of a handful of looks from Ford's SS2011 collection are beginning to bleed into the public domain. They are beautiful and interesting in contrast to other collections that showed. I'm struck by their overwhelming aspect of control and restraint. They're elegant and somehow sentimental odes to what he is known for without all the hyper-active sexuality of old. This time around he seems to be more interested i 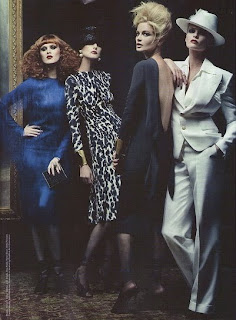 n the woman as total being and less so an object. The suits are the most emphatic displays of texture, line and suggestion. That isn't to say that the other pieces are lacking, they aren't. What I expected to be a tour de force of wheel re-invention is more a collection of very beautiful clothes infused with loving and sentimental touches. 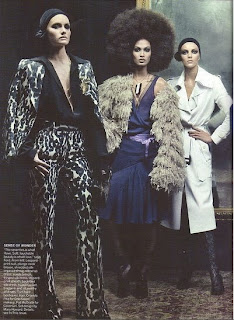 The look of the presentation feels very 80's like a cache of undiscovered designs. The mood of Saint Laurent floats above and below the models and even informs Ford's image of himself. It feels like the days when Loulou and Betty were the world's muses and Yves was only coming into the full bloom of his allure. That Ford was clever to restrict the flow of information is testament to his savvy as a business person. As long as people are 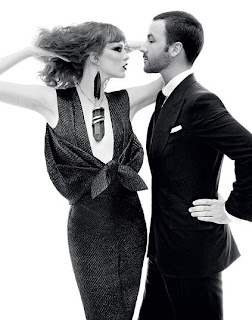 denied access it is all they will want. This ploy should work well for the debut of this collection much like a similar formula worked brilliantly for Bijan back in the day. I just wonder how long the magic will hold with so much of it rooted in images of a bygone era. Maybe its enough that there's someone out there who's willing to put their own neck and resources on the line to make seriously beautiful clothes.
Posted by Fluff Chance at 7:28 PM

Hi Fluff...to your point...i liken it to a reflection and inspiration from refinement and glamour that is sort of surfacing these days.Women who love these clothes have no issues with current "supposed" style and present themselves with a heightened savoir faire at all times.

"Top Secret" is not such a secret: fashion is in trouble as the world rocks from economic meltdowns. From my vantage point, there are no visionaries, only media spin. No industry, save the auto industry, has taken such a beating. The question is how Ford has avoided the reality show rehab. After the holiday's dismal results, more than Iman will be barking orders.

I agree with anonymous at 10:58 PM. It is all media spin...No truth, just puff pastry. The truth will be in the numbers.