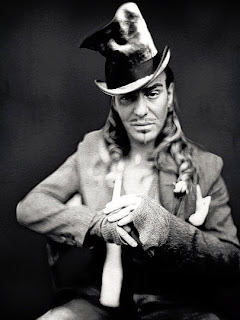 John Galliano's art is greater than the man behind it

I don't like drunks - loud, boorish, unpredictable. Still less do I care for alcoholics of whom, among my friends, there have been three, all eroding friendship with their cheating, blatant lies and wheedling excuses, until affection has withered into hapless responsibility to which there seems no end. I have seen enough of both the drunkard and the addict to know that the loosened tongue of abuse does not speak the truth - Pliny, two thousand years ago, was wrong with his "in vino veritas".

The alcoholic, in loathing himself, expresses it by turning it on others, even the very friends who care for him. It does not matter that the object of the frustrated rage within is not Jewish, Chinese or Liverpudlian, he seizes on the dark distinctions of perceived difference, labels them and employs them for abuse - and if we thought these ancient prejudices were bred out of us, we should consider how easily our unguarded first response is of denial. "I am not a Jew," we plead, "I am not Chinese, I am not from Liverpool."

For John Galliano's for me literally unspeakable outbursts in a Paris bar I have no sympathy, yet I find it impossible to accept that they were in any way a reflection of his philosophical soul.

They prompt only one question, and that is for his employers, Dior, and his friends. Where were you with your concern and friendship when the first of these irrational outpourings occurred?

Did none of you notice that he had reached a stage at which he urgently needed help before the first of these self-destructive episodes? Did you not see how much alcohol, how many drugs, he was consuming? Were you blind to all the signs? Was it not obvious that you should see him to the door of the Parisian equivalent of The Priory?

Galliano's abuse - the dirty Jew, the gas chamber, the "I love Hitler" stuff - was abhorrent, and I perfectly understand the Jewish response to it, so raw is the memory of the Holocaust, but the hypocritical Pilatism of Dior, the handwashing for sacking him for anti-Semitism, is repugnant.

This man was their employee and their duty of care obliged them to protect him from himself. Instead, they let disaster happen and then, realising that they might lose every one of their Jewish clients, dismissed him, and in so doing, utterly failed to save face but quite certainly destroyed him.

Galliano will never, as Galliano, design again. If designing women's clothes is an art, then Dior has destroyed an artist.

Should we refuse to perform Wagner's operas because he is perceived to have been anti-Semitic? - even in Israel now, it is at last possible to play some of his less triumphal music. Should all Emil Nolde's great paintings be hidden in cupboards because he was for some years Hitler's supporter? Should Wyndham Lewis for ever be unmentionable and invisible because he too, at one stage, thought highly of Hitler's politics?

No, art that is not in itself political - and Galliano's is not - is greater than the man who creates it, and society does a cruel mischief when, in dispatching him as a scapegoat into the wilderness, it ends his life and influence as a creator.

Dear Anya,
Thanks so much for sharing this article with me and everyone else. It is the first responsible attempt by anyone to explain the forces at play in Galliano's life. I felt compelled to share it as it shines some much needed light on this dark subject. Thanks very much.
My best to you,
Eric

Dear Anya, Pliny was correct; the wine is true to itself, the drinker is not.
David

Fluff I wrote a good response to this and the internetz ate it. Ahh well, methinks this guy means well re: Galliano, but seriously underestimates how the fashion industry seems to work. Even in the best of times, it's CYA and things have gotten super insane in the past 10 years or so.

While I'd like to think someone should or could have helped him, I'm not convinced of it given how fashion and fashion people are. They bow to success and run away from anything less than pretty. If it's seems to be working, you don't mess w/ it....until ya have to. That's what the whole Toledano performance/website scrubbing was about....CYA and big $$$$$.

Speaking of CYA, I wonder if anymore will emerge about Carine and perhaps the Decarnin connection to it all?

While I do appreciate the sentiment of the article here...and do even think that Mr Galliano was rather goaded into the events that have caused this scandal, I must disagree with one point made regarding Dior's responsibility.

As a recovering alcoholic myself, who also happens to be the son of an active alcoholic, I can state emphatically that it is absolutley impossible to protect an alcoholic from himself, or to make him (or her) change their life if they themselves do not want to.

That being said, I do hope that Mr Galliano can see where he has ended up at this point, and will take steps to change his life, or as likely, to return to the life (and self) that he may only now be seeing is no longer there.

I feel so sad for him. In that video he looks so lost and fragile and alone, even while he hurls the hatred. Very sad. And he is so immensely talented. He creates such delight in the world, and is a great artist. We have lost too many of the magic makers of fashion recently, and the world needs them. I really believe more and more than artists like Galliano and McQueen and Lacroix are channeling the divine.

I feel so sad for him. In that video he looks so lost and fragile and alone, even while he hurls the hatred. Very sad. And he is so immensely talented. He creates such delight in the world, and is a great artist. We have lost too many of the magic makers of fashion recently, and the world needs them. I really believe more and more than artists like Galliano and McQueen and Lacroix are channeling the divine.

Dear Fluff, the article in the NYT this morning is interesting.
"High fascism" by Rhonda Garelick.
I know we are all getting quite tired of the story. She has an historical point of view on French Fashion and times though, which is worth reading.

That NYT Op-Ed was poorly researched (specifically on the matter of the German plans for the French industry....they DID plan to move it) and I thought the author went too far trying to make connection between dictators and designers. LOL

We need only but remember that this is the same company, that on the slightest pretext, fired a young Yves Saint Laurent from his job.

This was a sober reflection of what happened and indeed, a salutary effort.

Dear Eric, thank you so very much for sharing it with everyone. Your posts on the subject and this article were the only two sources of the balanced nature I have read during the phantasmagoria of loud accusations towards John Galliano. I am not looking forward to hundred more articles big and small on the upcoming trial of John Galliano. I feel so sick! I just hope that Galliano is strong enough to sustain this kind of pressure and reinvent his life. If it would be me in his shoes, I would, probably, follow the foot steps of poor Alexander McQueen.
Thank you for being so kind and honest.

I'm sorry you felt the need to publish this apologist tripe on your blog. Nothing said here was any more original or enlightening than anyone else who pities poor drunk JG. I always wonder why when a wealthy white person commits some horrible act everyone begins to worry about his mental state. As if there has to be some kind of illness or other temporary shortcoming present to make them behave in such ways. No. As is possible for anyone else to be, JG is a hateful, arrogant human being who could not hide those tendencies any longer. Just a regular man doing nasty things that so many regular men do.

Dior did nothing to him that he did not call on them to do. His work, his brilliance as an artist stands, no one can take that away from him. But his legacy is tarnished and good for that.

Thanks for putting this out there. Really insightful point of view. I have no words to describe how sad this is.