Would you cut off your c**k for a Victoria's Secret gig?

I know that sounds harsh, but would you? It seems like Andrej Prejic, a hot, in-demand cat walker would be willing to do just that. An interview quoted him as saying that he'd double down (add boobs, subtract bone) for a shot at Victoria's Secret. That is about the size of fashion mania today in a couple of weeks of some of the most depressing events to hit the headlines in a dog's age. All the rumors surrounding a psychotic game of musical chairs at 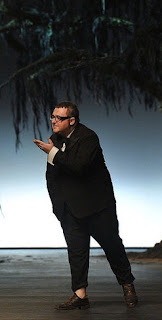 the grandest fashion houses in Paris has me seeing a city that is on the verge of self immolation. I'm ok with some of the tweets but to hear that Alber Elbaz might replace Galliano and Jason Wu could take over Lanvin is just one toke over the line. Even Marc Jacobs taking over Dior is enough to make my gums bleed but LVMH has messed with the machine so much that it's a wonder they even bother with a designer. Actually, I don't think they do. They hire and promote people who ape what a designer does without getting their hands dirty. Elaborate staff and stylists step in to do whatever needs doing and the creative directors jet from city to city manning openings, galas and locker rooms. A recent picture of Riccardo Tisci with Carine Roitfeld attached to his side like a smokey eyed tapeworm 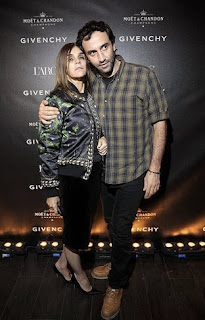 was a veritable poster for the new age of fashion: a wildly acclaimed design poseur with his walking talking parasite; the hopeless hosting the hapless. All of this side show entertainment has cast a shadow on the proceedings making it difficult to concentrate. I have seen some beautiful collections but also some surprisingly tepid outings by houses that used to rule. Hermes was outstandingly off its game. The premiere collection by Christophe Lemaire who succeeds Gaultier was nothing short of abysmal. When you think that Gaultier could fill a runway with only accessories and send the audience to the moon says just how right his contribution was. I think Hermes will have trouble giving a note book away with the sad state of affairs there. Luckily, everyone still craves the orange box and shopping bag. They just need to come up with some clothes to put in them.
Posted by Fluff Chance at 4:30 PM

amen!
Hermes was VERY un-Hermaes... pedestrian, bland, and well, over-priced. Gaultier made it luxe, worth the price and oh, so French.
Elbaz in for Galiano? oi vey. hope not. He's no couturier, sorry.
heard that LVMH just gobbled up Bulgary.. yikes!
when are they going to learn these mega corps doing everything doesn't work! (except for the VP's and the lawyers that orchestrate the mergers... the brands get bastardized, cheapened, and, in the end the costumers and the industry suffer.

It's most definitely enough to leave one's head spinning. An interesting turn of events, for sure, but the overall meaning is definitely strange. Seems the houses are definitely looking for show ponies and for new faces and rumours for the masses to obsess over.

I think the only one for Dior is Tom Ford!!! can you imagine? well, i can. it would be such a huge thing. Tom is like, (i know, the "like") the hottest designer. He is the one. Didi he even have a show???? hmmm. he was too busy reading a contract for life!

Fluff's on FIRE! You've been very nice an thoughtful of late, but I missed some of the fire...LOL. Did you supply it...yes you did.

I'm on the floor w/ your portrayal of Caring and Riccardo....dead! "Parasite"....ouch?! I take it you don't appreciate "kingmaker" editors? LOL Don't scald 'em w/ ya steam boy!

As for Hermes, well I TRIED to be nice about it on OTR. I know he was trying to take the label to "new" territory, but it was between 1975-1985 all over again there....the most awful parts of that decade too. :o/

Te designer-go-round is in high gear this time and people find their hearts ablaze. The names sugested by both the writers and the peanut gallery has also given me heartburn! LOL Tisci, Elbaz, even folks like The Sisters Mulleavy, Marc Jacobs, and even (gulp) Zac Posen. I can only shake my head in wonder and disgust at the idea of any of these folks. The only name commonly mentioned that doesn't just make me shake my head is: Olivier Theyskens. Frankly I like Olivier too much to wish this clusterbuck on him.

I ask, who of the big name PaP could take over Dior these days? Almost all are one trick ponies stuck in looks that have nothing to do w/ Dior. At least JG had shown plenty of versatility before he went to Givenchy.

It's gonna be a bumpy night folks...so fasten ya seatbelts! ;0)

I actually liked the hermes collection. as much as Gaultier is a great designer I personally didn't care much for his collections. I love reading your blog but I have a feeling you will think differently about Lemaire. it's not your aesthetic that is clear but to say that it was not a good collection seams unrealistic to me. If Herm¡es had stuck with Gaultier it would have become a really boring house. His collection are so boring and miss the wit and interest of the late80's and 90's.

I feel Christophe Lemaire brought something a bit of margiela but in a really 70's way. I like the odd colors and this anti fashiony statement he made. I still feel Margiela was the perfect fit for Heremès though!

i find it hard to believe anyone in their right mind would even consider jason wu for lanvin. I also an article citing Alexander wang for dior, which was funny. Did you hear the one about Rachel Roy taking over Givenchy?! jk.

Is it blasphemy to suggest LVMH hire Lacroix? I think we would all like to seem him return, and Dior needs a proper couturier...

Hey! Desperado! can you come to your senses?

I came across a Vogue boasting the
New Establishment designers of the 90's....
Galliano, Dolce, Gabbana, Lang, Ford for the Euro team.
Jacobs, Mizrahi, Kors for the USA team...
Look at the survival in the industry stats...
They did last the 90's...

Live for now, tomorrow we... know the ending!

You are too much of a gentleman to write on a fashion blog right now after all the disastesr that have happened lately, but somehow, it would be nice to hear from you a few words of wisdom and peace. We are all trying to get some sort of meaning to it all right now. You have always told us the truth as you saw it..

mg those hermes shots, the first 10 or so... weird stuff who would be seen in it? very stupid looking

oh and not so apropos of this article...

what has happened to galliano already... I'm sure that somehow he'll have his resurrection being at least as essential as kate moss even if her drug problems pale vis a vis nez a nez the pickle his pickledbrain has wrought, but it's very interesting that... there's not more wrung out of his downfall'' is the career now to be reduced to 15 minutes? maybe he could go the lagerfeld route of designing anonymously but I'm sort of amazed he's not still in the "news"