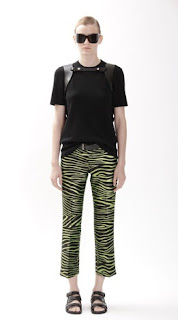 Probably the most vexing thing that can happen to a designer in the middle of his show is when the audience stops considering the clothes and starts questioning his or her motives. I wasn't there in this case as I was waiting for the phone guy and the rug guy and the deer fence guys to come and create magic at chez Chance. I did stop to"regard" the "looks" on my computer and had this "ahem" moment about 4

images in. Michael Kors , whose Sydney inspired collection translates to Urban Beach, not to be confused with Urban Zen or Urban Sprawl is designed to invoke the sensation of the ocean lapping at the corner of 68th and Park. I'm thinking it's the cross pollination of 10021 with 11937; God's little acres. In these days of reality TV and Lifetime Achievement

Awards bestowed on living, breathing 40-somethings the "notion" (I HATE that word) of subtlety is a quaint idea from the distant past. Michael Kors has been for a good long time a very clever, creative and talented designer. His signatures of luxe, unfussy, degage clothes that reek of sophistication and "class" has mad

e him one of the most well-regarded members of the Seventh Ave. Old Guard. No one does double-faced cashmere, crocodile and "don't you f*%$#g look at me" sunnies quite the way he does. He's a showman, a style arbiter and a nice guy to boot.
So what gives with this collection? Why scuba dresses, rote cut matron suits with minis, acid green zebra "boyfriend"pants and cardboard stiff-looking car coats that scream vintage Balenciaga? Is it possible to over-flog those dead horse muses, Babe and Jackie to a fare the well? An

d why would he reference Reed (don't call me a designer) Krakoff's belts which look like pancake-flat, fanny packs? That sort of misstep will only encourage him (RK)... All of these questions and more flood my mind as I look at this collection. These clothes don't look so much like offerings to the hip as they do go-to looks for the likes of Jaimee Gregory and Muffie Potter Aston. There's still an unmistakable richness to many of these pieces from the gold leafed knit sweaters and some odds and ends abbreviated jackets over pants. He knows how to spoon out the goodies without causing indigestion, I just wonder about his choice of menu. It's impossible to be profound every time but one also should think long and hard about the message you're sending. Better to say less than fill the air with a lot of mindless patter.
Posted by Fluff Chance at 11:53 AM

Now I feel totally confused about my love for Michael Kors. Apart from liking a couple of coats (well, because I just feel like I should really like at least SOMETHING), I am having this flashing questions in my mind and since it would be way to rude to publish the words that make up that question, I just won't... Oh, Michael, what have you done?...

Ok, I am looking at this and thinking where did he get those girls, are they straight out from a hospital stay, are they Martha Graham Dancers ? What king of hair style is that, do they need to clean houses right after the runway show ? I shop Jcrew for my 17 years old niece in Paris, she wants US preppy fashion,and they do a better job at making you feel alive and well and in the now , than Kors and that Adam Lippes fellow..I don't get it....The world has changed, women have changed and they have not gotten it yet...

I don't understand this collection at all. It doesn't really fit in with the Michael Kors aesthetic or appeal to his usual client. It references so much and doesn't introduce anything or keep things fresh.