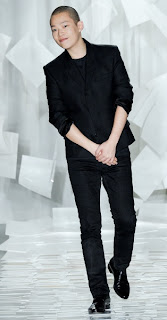 Yes, I know. Obnoxious title. Well, I would argue the same for this collection. Billed as "modern" and "couture" it is for me another long winded line up of his expected fare; a raid on the Oscar de la Renta oldies collection you can buy at a Palm Beach resale shop mixed with items that scream modern like anoraks, shorts and gladiator shoes. The sleeveless, peter pan-collared blouses, pencil skirts, beaded tops over tiered evening skirts and gowns with short lengths in front and trailing behind are all shapes we've come to associate 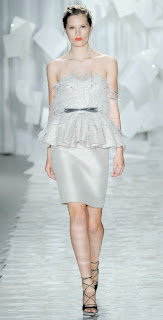 with O de la R. Even the little ostrich feathered cocktails he keeps hauling out season after season are still vain attempts at the originals. I would imagine that his copious 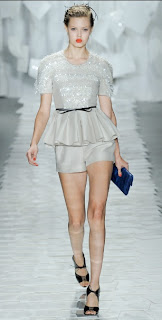 use of peplums on jackets and cocktail dresses is his ode to the couture. What I see in this collection and in many collections by "young designers" is this idea that covers are the new originals. It appears that Wu has bought into the murmurings in the past that he is the heir to Oscar's business, the next Bill Blass, the Carolina Herrera of tomorrow. If that were the case, it should act as inspiration to work hard, create an identity (his own) and become worthy of that honor. Not to sit back and copy every line of a handful of tepid shapes over and over again until you start to believe they' 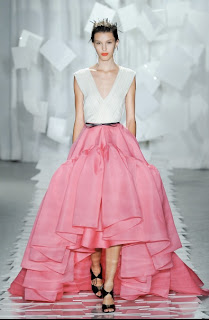 re your own ideas. The press encourages this sort of stunted growth. It takes much more than tricky runways in gilded hotel salons to make good clothes. The St. Regis should be spanked for making him their style ambassador world wide. What has happened? His program notes indicate his collaboration with a hot shot graffiti artist who came up with his falling leaves motif and another meeting of the minds with Tom Binns for jewelry. If the product of those collaborations is any sort of indication of the fireworks to come, the St. Regis needs to think about what sort of image they want to project: a 5 star luxury hotel or a Days Inn.
Posted by Fluff Chance at 11:03 AM

"covers are the new originals" ...

this moment of every single piece of clothes made and every single opinion which, alas and omg, is running to "yuck" or "swoon" or (looking for fork to poke my eyes out) "bananas" has stopped me from even liking fashion.

but coming to understand that the business of fashion is an a bit of quandary between economics, boredom at over-exposure and the cursed designers selling straight to shoppers at an insanely luscious markup, all things considered

jason wu and the fresher generation of designers passed go without a few years of working for the main houses in europe (many of the comers anyway, to be clear) and lost in translation ate zippers, buttons, fabric, seams and proportion

is fashion overvalued or devalued by the barrage that has me shuddering and even dreading a new Vogue or a Barneys email (sans Gene Pressman, should I care anyway)

but in some ways nothing has changed .. an argument or a hunger pang goes away in a nano-second with no memory in the presence of something authentically fine and beautiful, and if possible, sans the noise

Vanessa Friedman wrote a gorgeous article this week sympathizing with young designers and the ok I'm hot thinking wherein they do expect, if only I knew how to bold that, to be The Designer of The Year right here right now and the possibility of enriching their ideas with archives of brilliance is beyond them

I'm just going to state the obvious no matter how offensive: With very few exceptions, the ONLY genuine fashion design talents EVER to come out of Asia or any of the Asian cultures were the GREAT Japanese avant-garde of the 70s & 80s; Kawakubo, Yamamoto & Miyake.

Like the unbeatable MANUFACTURING industries in their native countries, these "kids" MAKE PRODUCT.

They do not design fashion.

We're talking about cultures that have historically & traditionally placed great value in conformity & analytical thinking over the individual & creative thinking.

Furthermore the cultural emphasis on the "value" of things (which prizes the APPEARANCE of glossy refinement, however phony, over the raw & vital, however inspired) ensures these alternately bland copies and over-conceptualized craft projects tend to be executed well enough to make the transition from runway to store & onto the backs of consumption-minded twits with ore money than taste.

For the Record:
In reference to the last comment, I don't think one can honestly or fairly make a judgement on a race or culture that is all damning. I don't believe that Asians can't design anymore than I think Blacks can't swim or Whites can't dance. Well, maybe 2 out of 3 is better than nothing....
Fluff

Just looking at it all, Style.com on the big LD screen monster...I was in Paris circa 1972, when Kenzo, Dorothee Bis and Ter et Bantine started their first show at the Salle Playel.They were showing a middle finger to Couture. Fashion then was just a small part of the economy,poetry still, we were not die hard consumers of anything expensive yet ! Front row, looking with wide eyes, madness, excitement, we knew a door had been opened , spirits were flying high, we knew we were not alone in the depression/recession of the times, post 1968...It was bleak and something needed to be broken,new hopes a new story to be told. Colors.. It lifted everyone's spirit. Like the perfect song, the right tune, the right wave, understanding the times.. Well maybe the question lies here, what spirit, what tune, what wave,those designers ride on anymore ? It's just a new corporate bubble ! Fashion bubble instead of the real estate bubble , .com bubble, gold bubble, the Tulip bubble in the 17 th century and on and on... All the costumer is left with here is expensive Torchons ! It's sex in the city clothing . The Row ? what ? Kenzo 1974, their $50 K bag, that's it ? what is that ? Wu what ? Fashion has been killed like real estate has been killed. A home is not a home anymore just a product, that may not be worth what one thinks at the end. But the real estate agents are still here, "time to buy" ! Fashion= real estate. Same bubble. Same people, all real estate agents !

First, a thank you to our host for NOT self-censoring & posting my mildly offensive (and no less accurate) rant.

Second, I'd like to state plainly & point out that at no time do I say or claim all Asians can't design. I start out lauding the truly genius exceptions and I proceed to limit my critique to the "current crop" of the last decade.

I happily concede there was a time when a Sui owned the girly vintage look, Vivienne Tam craftily mined images of Chairman Mao & Anna May Wong and the only way to wed was in Wang.

Finally, I don't believe all Blacks can't swim or all Whites can't dance either but it's dishonest to pretend history, culture & nurture don't have some effect on art.

and furthermore...
Don't believe anyone who says Cats Can't Bark.

AC is so right ! Miyake, Kawabuko, Yamamoto.
Every arguments AC mentioned is right and thank god Fluff lets us vent a bit ! By the way, Fashion night in Paris, yes lots of booze and petit fours, but no shopping bags in the streets. I am glad the fashionistas are finally feeding the people cakes and champagne.
You pretend and we will pretend too.

...Bravo Fluff!
I SOOOOO immediately thought of Oscar as soon as I saw the pics! As for the Asian designer thing...this is the reason I moved to Europe(Paris) to hone my skills before even taking a step towards the light. How do I put it? I would rather be like Mcqueen and Azzedine or even my former BMOC(big man on campus) M. Galliano - they had a sense of who they are/were and created truly original ideas. There are Asian designers here who do DO good design...just without Mme Wintour's backing.......

AC: as an Asian-American, I really found your comments offensive. For example, your sweeping statement about "cultural emphasis" and the elements which Asian cultures apparently put a value on - sure, there are many points in common when it comes to aesthetic sense among the Japanese, Koreans, Chinese, etc - but these are unique, different cultures and civilizations. Your suggestion that somehow these designers - "kids" as you call them - are united by a common cultural identity that manifests itself in mediocre fashion design is awfully rude. You could have very easily lamented the state of young American design (and I'd just like to say that for many of these designers their "native" country is the US of A) without making a deal about their ethnicity.

Yes, my thaughts exactly, just another De la Renta. nothing innovative, talented or interesting about his work. Why would they (CFDA) let another American sportswear label in to fashion week, he's not giving us anything new and ever season looks about the same.