For the most part I passed on the spectacle that was MBFW Fall2012 but not completely. My enthusiasm for it was dimmed by the cancellation of, for me, the most anticipated show of all, Chado Ralph Rucci. After last season's collection at Lincoln Center, not to mention

the 3 previous collections I'd gone to, I was primed for the experience. Alas, it was not to be and that took the shine off the upcoming week. Nevertheless, I tuned into Style.com and took in much of what paraded by and found it impossible to avoid the reviews in the New York Times. So, without the benefit of the scrimmage before showtime, the posturing of the front row, middle and standing room sections with the attendant swarm of cameras and TV crews aimed at the front row, or the mood of the show by way of music and in some cases incredible sets and staging, I just took in the clothes one look at a time. Considering the number of shows that we

re staged, that's a ton of clothes. Fatigue set in early but that made the bright spots that much brighter when the banal gave way to the brilliant. So much is printed about the Blogger as being the most sought after guest. I am one blogger that seems to come up with very few invitations. So as much as I'd prefer to see the circus under the big top, I satisfy myself with viewing it from the comfort and safety of home.

Initially, I had the feeling that the party line was waving the same flag: black, red, gold and oxblood sportswear-heavy looks with a lot of hair, or more precisely, fur. I was surprised to see the editors give approving nods to Jason Wu for a collection that was as one-dimensional as it's consistently been for some years now. Wu who embraced his Asian roots with an ode to Tokyo Rose or Shanghai Express, put together a collection heavy on the red, black and gold. Military

details and the cheong sam of the 50's, all tight bodied and above the knee felt about as authentically far eastern as a trip to China town. The lines of his shapes are a bit more wavy, giving the clothes a hint of technique. The saccharine cocktail looks that weighed it down in the past were replaced with more sportswear that was just as aimless as the cocktail but that seems to be the thing that makes editors happy. Nothing gets praise more than another tedious line up of soulless separates. But it's the tortured evening looks with as much life as a dress cut from a McCall's pattern that make me question why he is touted as the heir to Oscar de la Renta. But the way Oscar looks these days it's not too far off the mark. They both make Zang Toi look like the elder statesman of the Park Avenue two-step. These clothes are fit for a Real Housewife and little else. I still don't get it.

Prabal Gurung did a nice job this time out with a collection that had some muscle behind it. The look is quirky with sour and sweet mixed to give it that international feel. I get the feeling that the race track is starting to be a bit less crowded with the fastest and flashiest horses breaking away from t

he pack. Prabal Gurung's collection felt vast with a multitude of ideas that could easily have been a few collections. There was a slickness to it that belied its relative freshness on the scene. The black embroidered chiffon cocktail dress and gown at right were 2 examples of his maturity that impresses me. 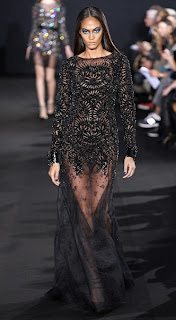 Some of the looks in the front end of the collection in black with sleek trousers, cashmere cape or jackets look like a seasoned designer's output. As polished as it was, it felt like the product of a stylist operating from a road map. The public who buys it didn't appear to be included in the conversation. More than for the consumer it had a feel of being produced for an editorial or a red carpet moment. Not that there's anything wrong with that. There is a feeling of overarching ambition to define the brand in as little time as possible, as though the clock is off and the idea of time and taking time is a notion for the past. Unfortunate, in my book. 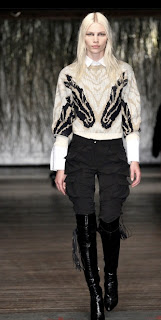 d as having one of the best collections of the season. Having just won the CFDA/Vogue initiative with a cash infusion, he seems to have put it to good use. This season was more valid in my eyes than last fall with his one big idea; the parka with fur trimmed hood just like the one I wore along with thousands of kids in 1973. This time we were taken along a gypsy caravan to Morocco and parts unknown. Where the points are scored is consistently in jackets, a few coats and belts. There were great big stamped, tool

ed and gypsy coin laden belts that would let anyone know you were coming or going. The shapes and details of a few felted and cashmere peacoats with toggles (gold plated horn!!) were cool and looked well made. The under pinnings like sweaters with paint by number horse heads left me cold. It's become such a "thing" to do the animal thing on clothes that it just looks derivative and unoriginal, not to mention awkward. The jodphurs in wildly printed gypsy/moroccan rug motifs look as buyable/wearable as the low slung tight, cropped cargo pants. Not good on the models so most likely heinous on a real woman with a shape. Still there was a cohesive, complete harmony look to the clothes. Fur is used with little or no thought to correctness or not. One has the feeling that fur is a detail that designers today feel validates them as being players in the high end, luxe stakes. I'm not convinced of that, but hey. There you have it.
Posted by Fluff Chance at 7:15 PM

THanx for reviews of New York FW Fluffy!...yeah as far as Jason WU's is.. funny thing my mom called and first thing she said was" his collection looked like what u did in college!".. and this is well over 10 yrs ago....

Thanks for reviewing Fluff. I had fun, just like you, watching at home with a pot of tea, by the fireplace in my slippers.
Spirou

What do you think of Sally LaPointe? I liked her collection this season and would be curious to hear what you think. Also do you have any favorite "indie" designers right now?

Would the "seasoned designer" be Michael Kors?
All this hype for these young designers. Some of these shows look like they were purchased at retail in some other country and shown here at NYFW. There is nothing unique from these "designers" that can make these clothes theirs. No signature look. Prabal looks like Givenchy, Dior or Chanel depending on his collection. Joseph Altuzzara last collection looked like someone took a scissors to some Gucci dresses. His current collection looks like Ralph Lauren.

So my observations of Joseph Altuzzara's collection being a Gucci rip off is correct.
Joseph Altuzzara has NO formal fashion training ie he did not go to fashion design school. He "worked" for Marc Jacobs and Givenchy... AS WHAT??
His collection looks like a very seasoned designer's collections ie 20+ years in the fashion business.
Yet he won the fashion fund. I doubt he even knows the names of the fabric that went into his collection.


Youtubers are up in arms about it!!

It is a good thing I am posting anonymously.. LOL I don't want to be skewered by the fashion press or anyone else.

Vogue wants to sell their magazines and micro manage (rape?) their designer puppets for couple of years by threats. Anna Wintour and her staff tell them what to show, who to copy and who to be seen with, then it on to the next "designer".

The fashion biz itself is a joke...
Diane Von Furstenberg, Carolina Herrera, Tahari, Calvin Klein, Ralph Lauren are not designers, they are manufacturers who pose as designers. Most of them do not even set foot into their own design studios, they have unknown head designers working for them. The designers working under those people are very often over worked (60 hrs+ per week), 80 hours per week during fashion week and underpaid.
Let us not talk about behind the scenes in the fashion studios.... it is a whole new dog eat dog underworld...

Thanks for the reviews. Altuzzara looked a lot as a collection from Guesquierre at Balenciaga a few years ago. Do you remember that? He is a fraude. A few seasons ago it was all about Gucci and YSL, from the Tom Ford era.
Jason Wu mad the most naif collection about CHINA a designer could do. TOO obvious. Is that how he looks at his roots?
Best regards