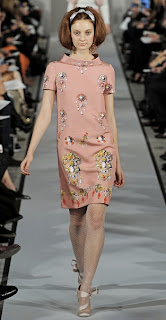 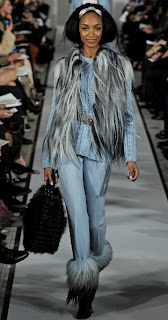 In the late 70's when many of us were off to college, some to boarding school and still others just getting into the groove of high school, the age of the poster was at its apex. As I hailed from Groton, Mass. the Harvard Co-op in Cambridge's Harvard Sq. was the place to go for posters. I'm not talking just Led Zeppelin, Farrah Fawcett or Beatles posters, but fine art posters of some of the greatest Old Masters to the Contemporary greats of the time. I was partial to the Abstract Expressionists like Franz Kline, Mark Rothko, Helen Frankenthaler but more than anything, I was a freak for Adolph Gottlieb. I guess I've always been a special case in most things that interest me. Many of my contemporaries at that time were particularly fond of Escher

prints. You know the ones of lizards, fish and birds all going to and fro morphing in an out of each other, all positive/negative mind bending images. Honestly, I think the attraction had everything to do with getting high. In those days all of us were stoned 24/7 and anything that enhanced that permanent state of twistedness was, well a necessary accessory.

I'll never forget a night at a friend's parent luxury apartment at Charles River Park that had a sign saying, "If you lived here, you'd be home now". High above the Charles River we had taken over the apartment which was really 3 connected apartments filled with art and beautiful antiques. Judy's parents were competitive ballroom dancers and were in NYC for the weekend and we were getting"primed" there for a Bonnie Raitt concer 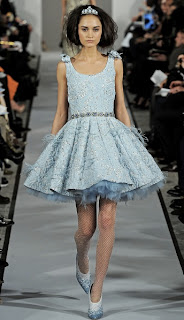 t later that night. It was one of the few times I took acid and my imagination which was very active on its own went through the roof. Looking down at the river from 20 stories up the water lapping at the edge looked like millions and millions of serpents and lizards scurrying into the grass just like an Escher print. I don't particularly like reptiles so I failed to be amused at this hallucination. For that reason and others, Escher didn't really speak to me. But he sure spoke to others. The poster I remember seeing the most were the labyrinthine staircases that at once looked to be ascending and at the same time descending. That's what Oscar de la Renta's collection looks like to me. On the outside it looks like its on the rise, with its sweaty-browed attempt at youthful irony. On second glance, one realizes it is working its way ceaselessly down the ladder of relevance and stylistic importance.

His choices of color for Fall2012

, namely palest pink, cream and "Wallis" blue are not in themselves wrong. The reference to Wallis Simpson is a cloying one especially with Madonna's tepid, revisionist story of the grasping, brittle, tough as nails, arriviste

, American social climbing, bigoted creature who stars in the new film W.E. The recently published biography "That Woman" by Anne Sebba, cleaves a bit closer to the truth, but I digress yet again. The cotton candy colors are neither here or there, but the motifs, styling and decoration employed all adds up to a question mark. Prints of jumbo-sized brooches on skirts, gowns and jackets look poor. Oscar is an elegant man with very refined tastes. Don't forget he goes home to Annette Reed de la Renta of the Charles Engelhard Court, Metropolitan Museum Trustee, and all around super swell pillar of New York and International society. When you do the math it all adds up to the best, not the least. So what gives with the rat's nest hair, regrettable tiaras, shoes that look uncomfortably li 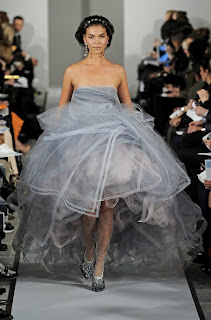 ke those worn by Minnie Mouse, not to mention the clothes? I love horses so I will refrain from beating this one. Obviously, it needs attention, care and a re-boot. You all can look this over and decide for yourselves.That isn't to say that there weren't a handful of looks that showed his elegant eye. A black paillette cocktail was free of tricks and simply beautiful. Another standout was an unadorned "Wallis" blue faille cocktail dress wrapped and draped at the waist with a signature portrait collar. The same can be said for an embroidered dress and jacket in black that echoed his tenure as designer for Balmain's couture, but they were buried in an endless parade of banal costumes.

I loved this collection for many many years. It was one I'd never miss given an invitation and the opportunity. I cried after one of them, it was so fantastic. Now I just feel empty, even bereft. The most unexpected development that happened almost simultaneously, was the ascent of Carolina Herrera up that same funhouse staircase. For all of her blanks she's fired the last several years, suddenly she presented a collection that should have had Oscar's label in it.....
Posted by Fluff Chance at 3:57 PM

You are such a good writer. You made my Sunday.
Rentalalalala is still trying to be Yves Saint Laurent.
His first wife Vogue Fashion Editor Francoise de Langlade made Oscar.She understood everything, she was fashion. She passed in 1983.The rest is Wall Street history.
Spirou

Thanks Spirou! And you are a wonderfully vocal and informed reader.

Fashion is full of imposters.

Dear Anonymous,
Unless Annette de la Renta has died within the last 12 hours I believe she is very much alive. Perhaps you're thinking of his first wife Francoise.
Best,
Fluff

Oh I forgot, Ralph Lauren copied everything English and called it his own and America bought into it or atleast the wannabe English did.

according to some inside info from people who work at oscar there are too many cooks in the kitchen. there's oscar who can seam to move forward, there's a creative director/consultant who comes from chanel and dior- he was an atelier director, so he's proficient in the art of making clothes but perhaps not the best suited to take the brand foward - who wants it to be more like where he came from, there's a son who wants to just license the hell out of the name because he worked on wall street and probably fueled by greed like the rest of his buddies on the street and then his wife or the someone else's wife connected to the family who wants the collection to be more geared to the asian market. and all trying to make oscar something of great importance or more than he is. perhaps that is where the ysl desire comes from.

if oscar wants to be the new ysl would need to official come out, to be a complete bag of mess with enablers to his madness, have some bully ballsy boyfriend à la pierre berge who will break down every door to make the product front and center everywhere, let's not forget an emotionally complicated relationship with the bf, then and olny the real creative juices of the so called genius could come out and create the type of earth shattering, mind blowing designs like YSL.

oscar as ysl? see above

i think oscar needs to retire and enjoy whatever villa he has in the dominican republic. i find his collections for the most part to be a complete bore. the same goes for ralph lauren. actually he's worst.

I am old enough to remember the wonderful horse riding store on Madison between 63 rd and 64, west side of the street, long gone. We use to buy boots there and wonderful riding fashion pants and jackets at a fragment of the Ralph Lauren prices. It smelled so good in that store...
Completely off topic :the Academy Awards are just a runway now,as if we did not have enough fashion weeks and tralala...It is sad because the Ladies seem to get attention for their dresses and not their work. Male actors should wear dresses as well , that way they would get the same amount of coverage as the ladies.The Networks' imbeciles commentators, where there "en masse" passing idiotic judgements , complete lack of grammar,bone thin moronic girls asking ridiculous questions... I would wear a hemp sac ! I miss Cher !
Spirou

I remember when Carolina Herrera was ignored in the mid 90's...I still found mdese for my staff to sell by
hanging samples in the boutique..tu souviens?

I would hollister your blog the dreamland! While Santa knocks at our door just once per year, you blog is open the whole year – wow!