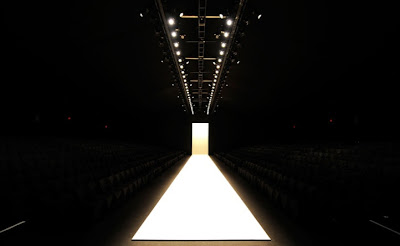 Does anyone know what a P.of C. means? Is it a style rule you live by or is it a statement of fact about the world we live in? Maybe it's specific to the business of style, fashion and the arduous climb to the heights of social conquest. Like so much in my life, I could be over thinking it and not just letting go, letting God as it were. It feels like an over simplification for the mysteries of how to find, have, harness and flog a certain kind of success.

With Fashion Week bearing down on us like Midnight Madness at your local Best Buy, everywhere you look you re 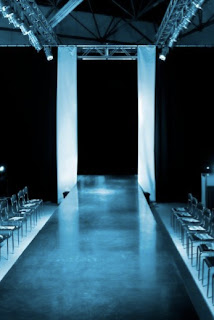 ad stories or see fluff/puff pieces on the fashion mob. Underage models working the runway at 10 years old and older, if their past their prime, and doing it for clothes. Then there are the stories about the new "kids" on the block who have taken the reins of old horses with razor sharp spurs and the aid of pills and PR people to make the poor broken beast hobble a step at best, or pass wind at worst. Cranked up agents like PR Consulting's Pierre Rougier are in the news with his particular brand of toughness. I guess a huge price tag coupled with his nail studded club gives them what they want (clients) and the others what they need (editors). The NY Times delicately finessed that story which did little but act as a promo piece for his agency that looks hard up for business. It's never easy when the client has to wait to be chosen while the PR agent gets to choose. Losing the big fish only to retain the small and ailing ones doesn't look like the best business model. The more interesting story would be how and why he lost some of his stars...

Christian Siriano takes over the cover of the Style section today in the Times and says more than a few honest and interesting things. I'm not a big fan but I do admire his drive an 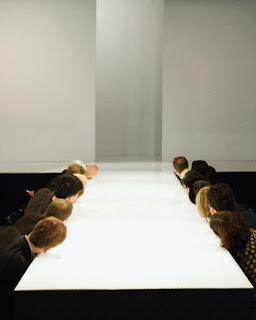 d determination. It's unfortunate that the CFDA has kept him at arm's length when they have so readily embraced other designers with less of a business and sagging profiles. The clubbiness of it is disheartening. Why has he been black balled again and again? The bottom line should be how well your clothes sell and not your pedigree. Let's be real here. Most members are self created. Even with pure blood lines they tend to be the runts of the litter. If the client out there loves you and the stores see that you perform, well that's about as good as it can get. The rest is just fairy dust. That organization had a much warmer heart when Stan, Fern and Peter sat in the driver's seat. Lisa has a heart that still beats loudly there, but you'd have to search high and low to find anyone else with a pulse.

To bring this to a close on a really low note, I have to say a word about the Blogger. The cover story of the New York Observer has a bloated, shopping bag besieged BryanBoy with a cadre of supplicants kneeling at his feet. Marc Jacobs, Anna Wintour and Karl Lagerfeld. The artist takes a degree of poetic license but the fact remains that that is what the Blogger (the successful iteration) has become. We learn little of BryanBoy other than all the secrets he keeps hidden regarding his past, how he profits from being a fawning bullhorn for the establishment, his questionable finances that come from that fawned upon establishment and the secret to his rise from some backwater town in the 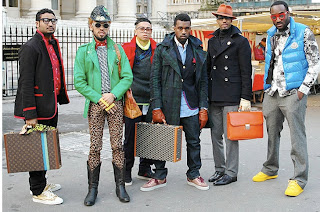 Philippines to the comped suite of any given 5-star hotel from here to parts unknown. It looks like bloggers of note get co-opted then commodified then ushered into the magazines, neutered, de-fanged, brainwashed, gifted, then sent back out like Mormon missionaries to spread the word of the gospel according to Seventh Ave. (or sing and act out its praises which is Tavi Gevinson's new gig). So much for independent thinking.

I guess I'll go to my closet and think about what to wear to the shows. I keep forgetting... I can go in my Paul Smith boxer briefs and flip flops. Everyone will think its couture! Obviously, Kanye and Ko. are disciples of It's a Brad, Brad World! According to Brad Goresky, a P.of C. is a "pop of color". He's staking his reputation on it along with his new reality show. I personally think its a .... Point of Contention?
Posted by Fluff Chance at 8:51 AM

As usual, spot on observations.

I have to agree on Bryan Boy but I strongly urge you to reconsider on Tavi because that girl is reaching new heights that Anna Wintour cannot touch with her site, Rookie.

Thank you, once again, for your very honest opinion on the subject. Personally, I am geting a little sick of hearing about Brayan Boy and can not figure out what is his true contribution to the world of Fashion. "Naked King" of the Blogosphere comes to mind. All this swirling action around NYFW which consists of the crowd described makes you appreciate more guarded approach of the designers like Tom Ford who stay clear of all of it keeping focus on presenting his Collections to the very immediate circle of those whoes job, indeed, is Fashion. Also, I have a feeling that the further we go with NYFW, the less we see Style and Fashion in those who attack the doors of the Lincoln Center to be noticed and photographed. The lenghth they go to is unbelievable: P. of C. being the list criminal of it all. :-)Seems noone cares about Fashion, everyone cares about notoriety. Something you will never see in Paris. Makes me really said.

Hehehee I could think of what a P.o.C means at least living here in Paris and seeing the difference in collections....But to contend a point made by Couture Millinery Atelier-while working as a Galliano intern..I saw the crazylines to get in to the show,the stuff these ahem "adults kids" wore seemed more suited to a crazy rave/white/foam party...just saying same stuff happens everywhere.

I agree with Joy , Tavi is turning out to be a very interesting kid, her blog is changing with her point of view . BryanBoy to me is like an annoying bug I want to crush with my shoe. There is now an "exiting the shows" blogs on you tube...Can't wait to hear your views on Theory and Mrs Beckham.
SPIROU