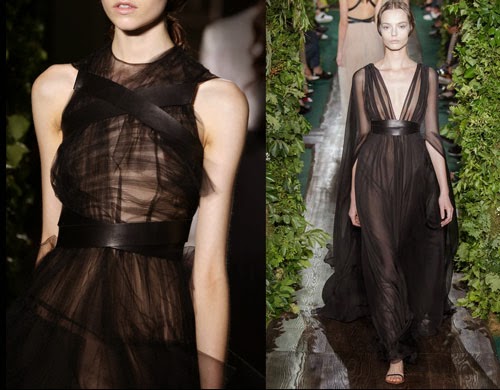 All this talk about the past vs. the present, the old world vs. the new, Couture that addresses the now is what many espouse and precious few deliver. One could argue that new is the new old, but honestly it isn't. There's old and new but the bulk of what constitutes the new is only a gaping grey area, a mountain of scraps of this and that in a dull mix filling slop buckets to overflowing. The same slop bucket is what feeds most of our authorities on the subject.


At a discussion the other night after a screening of the Diana Vreeland film, "The Eye has to travel" by Lisa Imordino Vreeland, China Machado a famous model who worked with Balenciaga and then Givenchy was asked by a person in the audience if there exists an editor in chief of any major fashion magazine who has a vision that approaches that of Mrs.Vreeland. Unequivocally, China all but shouted, "NO". There's no room now for that when all that matters is the bottom line. "MONEY has killed what once was", she lamented to an audience that sat silently. 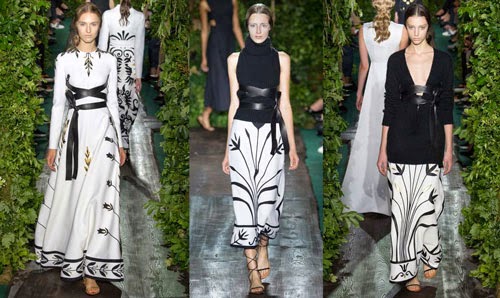 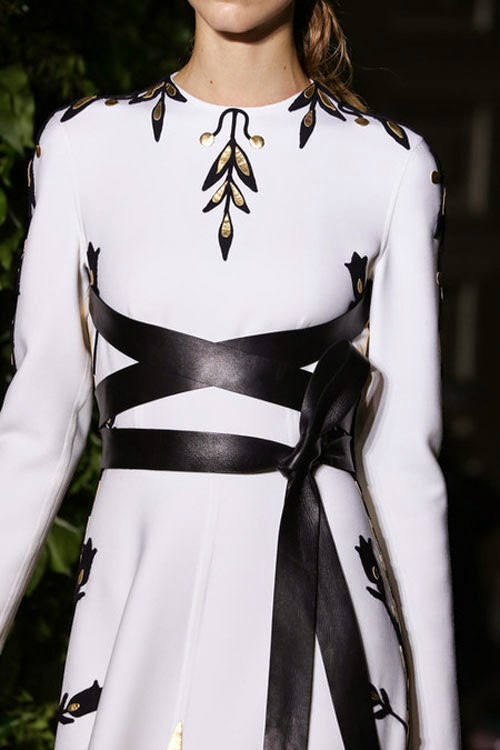 So what does it take to cut through the fetid cloud of mediocrity? As much as vision is of the utmost importance, it's a commitment to a path that moves ever forward that is the soul of the new. I'll go a step further and say that the designer who looks inward has a gravitas that the others who play to the crowd don't. Code fixated designers choking on a house's DNA have little room to move. Exceptions exist and that would be Maria Grazia Chiuri and Pierpaulo Piccioli of Valentino. 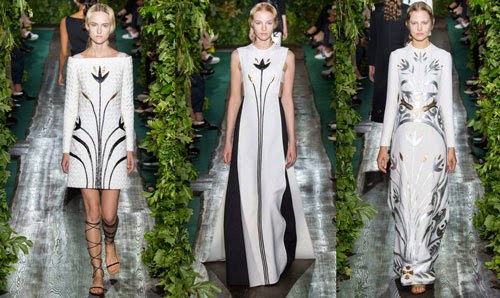 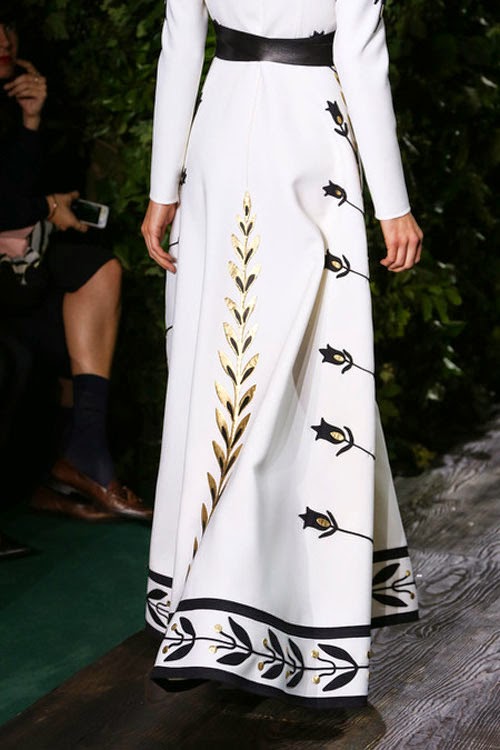 From almost the beginning, there's has been a contribution that is at once true to the grandeur of Valentino but goes steadily forward. The glamour associated with Valentino Garavanni's lexicon of exquisite luxury is the backbone that informs the new team. The techniques of the atelier at the fabled house remain in practice but turned to address a new aesthetic, one that is based in the now. Evening dresses and cocktail dresses are possessed of the same integrity and impeccable workmanship but distilled in a way that applies to women today, the working, the pampered and the young and old. 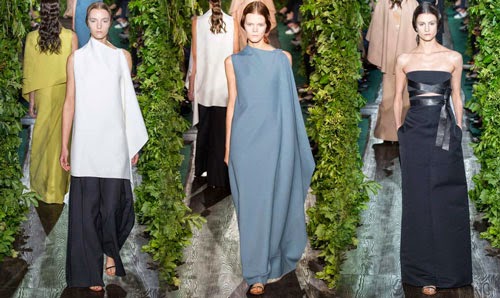 Whether its tailored jackets, suits, coats or draped dresses in chiffon, jersey, etc. the skill is apparent. Even in the sportswear looks, they too are imbued with couture technique of the highest order. The breadth of the collection is another difference from many other Haute Couture collections. 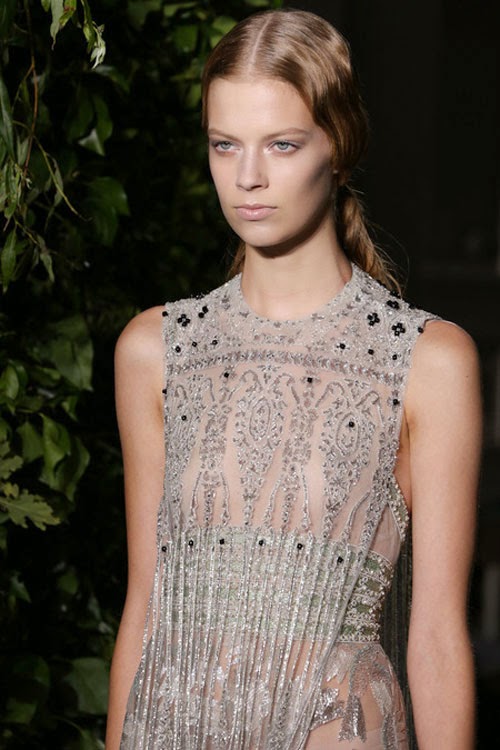 Whether bold graphics, completely new ways of handling lace, embroideries that suggest an odd romanticism vs. conventional sap add evermore mystery. Color is another element in the mix that arrests the eye. Combinations of color, often muted creates a mood, a feeling that touches the wearer and viewer in much the same way. It's an effect that draws one in, making one hungry to see more. Shapes are so varied that most women are included with a symphony of ideas, not 1 or 2 notes only. This is not Chopsticks but a Rachmaninoff piano concerto with full orchestra. 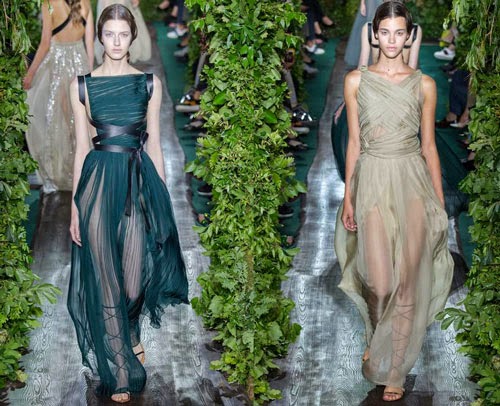 What speaks loudest is the fearlessness with which they work. Perhaps there's strength in numbers but I would hazard that their partnership is based on mutual respect and admiration. Even better, Valentino and Giancarlo Giametti applaud louder than the audience embracing the duo at each shows end. Where do you see that? At YSL? No. Rather than break it down exit by exit I wanted to speak more to the heartbeat of the house. The collection speaks for itself. 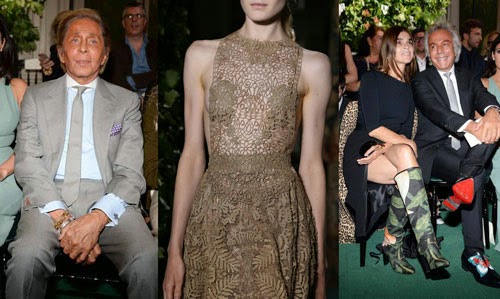 Now is no time to look back, whether longingly or literally. The world is reminding us of that ugly fact minute by minute. The mission we all face in all aspects of life is to move ahead. Mrs. Vreeland said, "Don't give them what they want (or what they abhor) but what they didn't even know they wanted"! There's only one way to do that. IMAGINATION. INTEGRITY. HONESTY... and WORK.
graphics courtesy of Garnet Spagrud

Beautiful illustrations for a fantastic review.