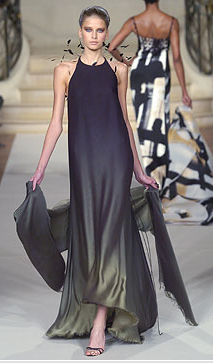 I have a confession to make. I've been wrong about this man. I've criticized him and feel I owe him an apology. I think that in some way I've discredited him and his uniqueness . He is truly a master. Ok, I think an arrogant one at times, but great talent has all kinds of human foibles which are not always easy to take, but it should never take away from the exceptional qualities they possess. He is unquestionably one of the greatest designers we have in America, and a designer who can stand up to the greatest in the world.

I recently looked at all of his collections, books which include his work and his own book of his work. Chado Ralph Rucci is a designer who will go down in history as someone who changed the way we all look at fashion. The designers who comes to mind when I think of his power and vision are names like Geoffrey Beene, YSL, Balenciaga,Dior, Poiret and Vionnet. All of these people changed the way we see fashion, style and the absolute mastery/mystery of creation. It's about finding a new language to express the idea of BEAUTY. The sheer force of his vision and unwavering belief and commitment to his message is the challenge they all faced at the risk of what was considered accepted...the status quo.

What is so profound about his journey is that to this day he faces a journalistic public that resists giving him his due. I have been part of that blind mass. He's a designers' designer. Research, experimentation, starting and stopping, scrapping an idea until it communicates the idea he intends. The stress that goes into this form of perfectionism is one that most people in fashio

n have neither the patience , drive or commitment to go through. He is the antithesis of fast fashion. He makes a tee shirt a work of art. I've seen piece after piece which and wonder how he came to that particular choice of cut or detail. The cost is extraordinary, but at the end of the day one is investing in an article of clothing that will be a collectors' treasure long after he and the rest of us are gone.When one considers how the most important press: Vogue etc. , ignore him month after month is criminal. This is a talent that makes so many other would be talents look like school boys and girls.

I only hope the world wakes up and begins to acknowledge him for who he is and the contribution he makes day after day, season after season, year after grueling year. The man is a force of nature. 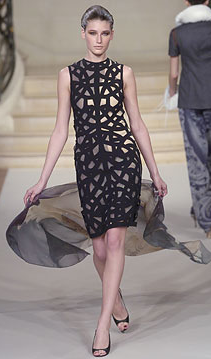 I have thought that your mentions of Ralph Rucci related more to the health of his business rather than his talent.

Love the green dress in pic #1.

You are crazy. I've seen his work and year in year out he's doing the same dress. Boring.

To anonymous #2
The same could be said for Beene , even Balenciaga. There is a degree of self referencing that happens, but at the same time it's also a way of taking certain ideas and developing them and working at them to find an even better way to express them. Boring for some, but ultimately never dull.