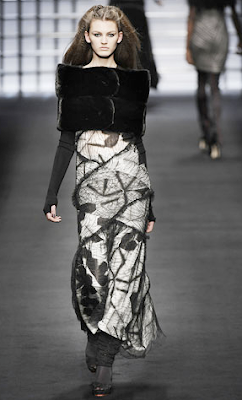 I think it was a good season. Paris is still ground zero for fashion. Not NYC and not whatever is spit out from Central Saint Martins' (as a rule) or Milan either ,with one or 2 notable exceptions.London does have a growing energy that demands attention. The action is in Paris. That's where the big Girls and Boys play. So here is a lightening fast tour of what I saw that I liked and didn't.
Before I start, there's one detail I'd like to shine the light on. There was a leit motif that ran through many, not all collections. There was a prevailing reference to Yves Saint Laurent. This referencing started last season most notably with Marc Jacobs/ Louis Vuitton. This season it was more like a virus. Done best by Ghesquierre at Balenciaga and a handful of others. It was sort of strange. The auction of YSL and Pierre Berge broke records at the Grand Palais days before the season began and then everyone showed 'homages ' to the master. Interesting , but a little jarring.

Above, a look from Karl Lagerfeld, which does not reference YSL. (never in a million years....)


Dior/John Galliano: The overiding theme was Orientalism put through the blender. Galliano is a master of technique. His imagination is so ripe its oozing and the collection was full to the brim with a feast of elements spilling over each other. From New Look shapes to transparencies in filmy embroidered chiffon, it was a collection like what must have run through the addled minds of the Opium addict. But in all ways sublimely beautiful. His imagination is the most fecund of them all there whether it's your cup of Absinthe or not.
Lanvin/ Alber(t)Elbaz:Real clothes for real (rich) women. A cool collection focused on the real and not on the sensational. That isn't to say Elbaz's unusual shapes, quirky draping and proportions aren't sensational, they are. He's just more firmly planted on the ground than Galliano. He is reaching out to a real woman, not one who is more a vaporous fantasy. The clothes that read more chic day were just that. The cocktail dresses were confections like a lot of the evening. Pieces whipped, beaten folded and stirred by the hands of a gifted chef. He designs from his soul. I have the feeling it is not a quiet , peaceful place, but that is unfortunately the truth for most truly gifted createurs. Their interior lives are a churning sea of conflict which find creation the balm. I liked it very much.There was a very interesting profile on Elbaz in the style issue of The New Yorker a couple of weeks ago. Very enlightening. Get it.
Karl Lagerfeld: For the most part a very interesting collection. The shoulder for many designers is the area most altered. He played with it , exaggerating it , squaring it by way of sailor collars for the most part. I don't love that particular point of exaggeration but it worked in some pieces. The epaulets, jewelled and embroidered were ok but I preferred the simpler looks. This collection always has a very esoteric quality to it and as a consequence seems to go over peoples' heads , but there was beauty in this collection. One must go to style.com to get it's essence. He's a prolific designer. A force.
Time to take a walk in the woods....too beautiful to stay indoors.
Posted by Fluff Chance at 12:52 PM