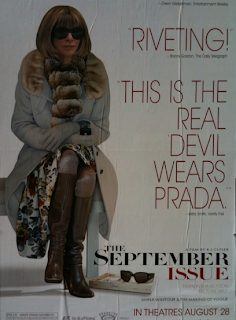 More to the point Anna's big moment.......and Grace Coddington's, too. Somehow ,I don't think that moment was supposed to have room for the 2 of them but it did. On the scale of who's moment was more momentous, it looked from the outside like Grace may have had a slight edge. With the new international scoring system it will be a while before the judges have all weighed in. The collusion of the Russian judge in the recent past is throwing all of this out of whack, but we'll get those in ASAP.
The film doesn't open until next week on the 28th, but the buzz was deafenin 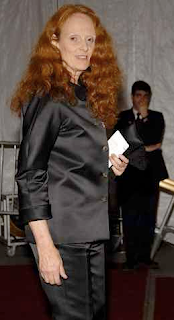 g with it's premiere the other night. For the life of me I don't know what became of my invitation. Everyone of weight (industrial weight) was there but I had to satisfy myself with a cozy spot on the side lines . It seems I'm often watching the parade and not marching . That's ok though. I have a 100 piece marching band in my head and they're ready to take to the streets at any moment.
I've been looking out for comments and critiques in the press and from 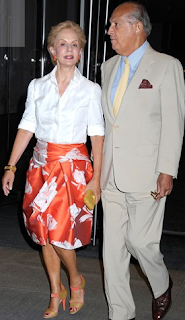 informed colleagues as to the nature and thrust of the film. We all know it's the making of the Fall 2007 September Issue, weighing in at 17.5 kilos laden with 1950 ad pages and a whopping 23 editorial pages. That book was a freak of nature. You could kill a very large cat or medium sized person if you dropped it on them at the decisive moment. Say a moment when they slept or were tied down on the ground with each limb anchored to an iron spike.
Word has it that the film crew led by it 's director,RJ Cutler,followed Anna Wintour through all the stages of

putting the book together. Endless editorial meetings, sittings proposals , meetings or gatherings with frightened photo editors and assistants of every stripe and plaid that resembled audiences with an dispeptic Queen. The crew was constantly trying to draw Grace Coddington, the other most powerful creator of the editorial pages...the Uber -Sittings Editor and Creative Director, but she resisted for some time. Once she gives in, the tension and drama of the whole project starts to percolate. In the end the issue is more the input of Graces than Anna's. That's neither here nor there, it sounds like it makes for a fascinating experience. The trailer shows a petulant, cold and dismissive Anna towards her staff. In private we see a very self referential and self absorbed woman who seems strangely childish. Daddy was her model and idol and she followed his rigid example. This will probably make The Devil wears Prada look like a Saturday morning cartoon. I'm very excited to get a better feel for this force of nature. Her appearance on 60 Minutes a couple of months ago was enlightening. I came away with a greater respect for her single-minded focus on her job and her dedication to the world of fashion , style and it's players. So what that the

politics of the game are at times unsavory,like all the time, it was an intriguing glimpse at the woman underneath the bob.
Though her personal style is almost always dead on , there are times that her choices are less than objective. Ageism is a big issue in her wo 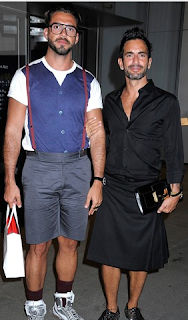 rld. I would go further and say that she likes to project a youthful, of the moment image. The dress she wore to the premiere was Prada(twisted irony....)but the sleeves were cut in wing fashion showing here thin arms , the skin crepey, wrinkled and armpits that had more flesh folds than the dress itself. That was not very pretty.
Accentuate the positive, and take the negative to the surgeon who erased the other negatives. Other than that she looked fabulous.
Some of the other guests were interesting in their choices of costume: Vera Wang is a true turn back the clock 60 yrs.old. Oscar and Carolina look packaged, she showing off her Hauteur and he forgetting to show his best angle for the cameras. Bea Schaeffer, Anna's daughter, chose unwisely too. Her dress is too short, too tight and makes her look too full figured. Fit is everything...She must have been at home sick the day that lesson was being taught. A beautiful Black woman is like a melody an

d Chanel Iman was symphonic in her loveliness. Marc Jacobs and Matteo,his betrothed looked very tanned and oily. Marc's 'manpurse', coupled with the skirt/skort and

Swarovski encrusted sneakers looked iffy at best. Here is a world class designer dressing like someone begging to be noticed. Holding onto Matteo's arm only heightened that impression. All I could think was, "Why"?
There were others making the scene who were less compelling, but I have to say that Jason Wu looked a bit odd with a model as his date, twice his height and wearing a mini cocktail number that's just as poorly thought out as his Inaugural offering. He should take more time in his choice of outfit and height of date. Zac Posen seemed ok flying solo, even if he was wearing high -heeled boots , a la Tom Jones and an embellished jacket that appeared to have come from Hamish Bowles' sample sale. He certainly is one handsome man, and charming!
What's most important is that we get to see the movie of the summer! The "Jaws" of 2009.
Posted by Fluff Chance at 9:54 AM

I watched the red carpet on You Tube and the topic of the conversation was Grace Coddington. Everyone was wondering who was she? Some of them did'nt know if she was Zandra Rhodes or Patricia Field, since they all seem to look alike, hence the red hair. The spotlight was definitely on her and not Anna this time.

I saw the movie in Australia during the Sydney Film Festival and it was a very enlightening experience. I'm a Stylist and I thought I was good but once I saw the magic that Grace Coddington makes I knew that I need up my game, seriously. The movie was fantastic and I recommend viewing it.

"the skin crepey, wrinkled and armpits that hasd more flesh folds than the dress itself"

Dear Designer,
Thanks for the typo alert. I'll be more careful.
Fluff aka nutjob