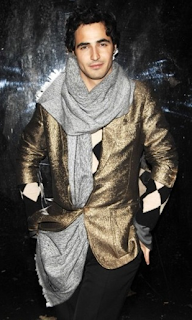 Today's luke warm news flash is that Zac Posen is foregoing the big circus tent at Bryant Park for the more modest venue at the Altman Building. That in itself is not heart seizing. What caught my eye and made me think is that for a few months now, I've been wondering in the back of my mind, "what's up with Zac?".
The suave, debonair, chattering, self imposing, Barnumesque, self promoting child star has been curiously absent from center stage. Historically(that means in the last 3-4 years) Zac has been the junior Isaac, Hamish, even Scaasi of the glib 1-6 liner. His unending patter regarding his empire building was trumpeted to any and all within earshot. That fine art, and it is a very sought after gift ,of blowing one's horn proclaiming his territory,the world, has been curiously muted of late. His collections which have become better and stronger in recent seasons with the exception of his fascination with 40's inflected looks, which is my least favorite period,have strengthened his prospects. Of all the young designers in the game I've felt that he is one of the most promising. His oily approach to self-promotion is the most tiresome ingredient in the mix. Unfortunately, it's probably the most valuable.
As a dressmaker and designer he has a real understanding of the craft. His ability to create sophisticated , glamorous clothes is clearly evident and outshines the attempts made by many of his peers. I'd go so far as to say he leaves just about all of them in the dust.Proenza Schouler,Rodarte, Peter Som,Wang,Wu,Thakoon,Doo,and a few others have neither his skill nor eye. His popularity exceeds theirs or did until quite recently. The D.C.Bump eluded him and catapulted a number of lesser talents leaving him to tread water in their wakes. I wonder why.
With P.Diddy, or the rapper formerly known as Puff, NOT to be confused with me,Fluff.... with Diddy's 2 million dollar investment and the cavalcade of starlets and society girls, he seemed primed for the upper-tier. The fact that the money didn't come directly from Puffy, but Puffy's Big Daddy Ron Burkle of grocery store fame with a $2.5 billion mega fortune is neither here nor there. The money was Zac's with which to build his empire. With his slow fade from the public's eyes, I started to wonder if something happened. With the economic crisis, did Puffy aka Mr. Combs pull back? Did Ron Burkle tighten the purse strings on the $50million he invested in P.Diddy which may have trickled down to Zac? Did he run away with a mysterious new paramour to a distant land, tiring of his perpetual, self imposed press junket and cozy home in the Village? Anybody got a light? It's mighty dark out here.
The answer to all of those questions and the ones I'm too respectful and well-mannered to ask are probably very simple and undramatic. Zac turned up for the photo-op at the premiere of The September Issue and I just saw him on the TV spot for Fashion's Night Out, so my fears are allayed.
His decision to switch venues from the large tent at Bryant Park still seems strangely out of character. His ego is not a shrinking one but perhaps his fortunes, like too many in this business, have.
Many would be wise to save a penny or two and economize for the immediate future. If it means a smaller show, or an alternative form of presentation, one might consider it. Especially when you factor in the cost of the staging is in direct opposition to the degree of the audience's attention. Most are there just,for the hell of being seen and have precious little time to focus on what's passing before their eyes. The rest of them have little or no money to buy and what's left are a school of pilot fish. The press are probably the only invited guests who are actually watching and processing what's being shown.

Hopefully the answer is as simple as him growing older & a bit more mature. Given how young he was when he became a fashion-household-name, the idea of living the rest of his life at that fever-pitch of publicity-hunting did seem a bit exhausting. Like you, I think Posen is one of the true talents of his generation, and I hope he husbands his resources wisely in order to stay in the game for the long haul instead of burning out too early.

Maybe he is about to re-invent himself? Like Madonna, it's good once in a while to go back into the cocoon and re-emerge as another beast entirely..
I wish him well... if he is as savvy business-wise as he is in promoting himself, he understood what the tea leaves said and opted for a more intimate showing for his real customers and afficionados. Let's face it, the tents are now filled with "housewives", other reality TV "stars" and their ilk. As a designer coveting dressing the elite, would you want to be too closely associated with that crowd? Specially, if it means sharing the stage with them? Nay, competing with them for the media's attention? Not after shelling out so much money on that bi-yearly circus production. I think the smart ones will all ditch the tents for more intimate settings (with highly edited list of attendees).

Before I got to the paragraph about Sean Combs, I too was wondering had Diddy abandoned him since his own line(cough!)has exploded? And I thought it was all Diddy's money, who knew? Anyway it's beginning to become a fad when there seems to be only one group of designers being the "it" designers of the moment. Is this a fad, it definitely is and then we'll have the next group of "it" designers being touted as the next best thing. Could it be that Zac is also a victim of these difficult and uncertain financial times?

I've actually been thinking about this post since you published it weeks ago, but held off on commenting till I saw the pics from his show today.

I really feel the label became a hit at time when its strengths- flirty, pieced, bias cut dresses, played to larger trends in fashion at the beginning of the decade. Women were hungry for feminine clothes and Sex and City was at its heydey.

But the trends have moved on and poor Zac is left in the dust. If the last couple of seasons have seemed lackluster, it may be becuase he can't push the line in other directions.

Not that he needs to. His clothes still sell-- a quick check of netaporter and bergdorfs (online) showed some of the fall styles had sold out already. He needs to get back in touch with his customers, and deliver what they want. Neon plastic rain jackets will not jive with the woman who will buy his glamorous bias frock at retail.