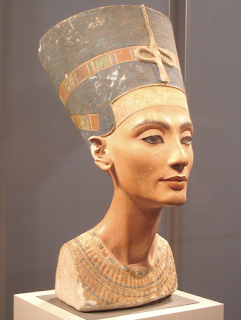 I've just noticed that the sun doesn't shine much here. It's cold, wet and grey with a slight smell of coal smoke in the air. Unlike other places, these are just observations along with a list of others and not the thing that sets a tone. At 3:45 p.m.it's sunset and at 4:00p.m. it's dark. Simple as that. This is one of the most compelling cities I've ever explored. NYC has a lot to recommend it and plenty to send one packing. Berlin is like a riddle that keeps you trying to find the answer. This is my 4th day and it's been almost impossible to stop long enough to put this down. I just wish you could come along on this winding , twisting journey.

I will have to start with my coming face to face with Queen Nefertiti. You all know who and what I mean. The Neue Museum has an exhibition of Egyptian sculpture, art, and artifacts , with Nefertiti as it's jewel. Honestly, I'm rarely in a situation where I am without something to say. When 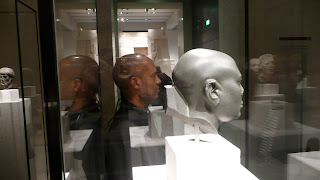 I walked into the circular corner room with a huge vaulted ceiling and a perfectly lit glass dome above , I was already in a trance. The walls were partially covered in a fresco that covered the walls of an Egyptian palace. All pale ochre and lapis with mostly bare plaster walls the color of beige. In the center directly below the glass dome, which seemed to be the only source of light, was a single pedestal . On it was the bust of the most beautiful sculpted face, neck, shoulders and crown on this planet. She looks like someone from now, maybe the future, but hardly from several thousands of years ago. Her gaze expresses a total self possession. It's as though she is in total command of all her senses, her inner strength, her moral compass. No one was permitted to take photographs( this is going to be about the only picture I will NOT have taken for these stories) and so we all just stood, hushed and staring. It really was that awe inspiring. You just cant believe this bust has survived, 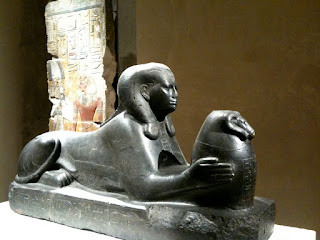 intact, for so many thousands of years. Only a chipped right ear, and a little chip on the tip of her crown, and an enigmatic , missing color to her left eye, but the rest of her is perfection.

The color of her skin, texture of her features, the sinews of her throat, all look like the work of a master mannequin designer. At the risk of reducing her to something cliche or commonplace, she looks like a mature Audrey Hepburn. The eyes, cheekbones, jawline and neck all say Audrey. I stood and st 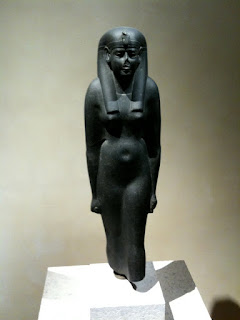 ared from every possible angle and kept coming up with Audrey. I hope that doesn't color your take on this story, but it explained to me something of Audrey's appeal. Her beauty spans time. Not in a gamine way, but in a way that women have of being the most wondrous, mystifying and powerful beings in this world. Queen Nefertiti must have been all of that and much more.

I found myself in many of the pieces that made up the exhibition. I could see a resemblance to these ancient Egyptians. Their heads were shaped like mine along with many of my facial features.For most of my life I've been embarrassed over the shape of my head; a bit too long in the back with a crown at the top and a prominent forehead. Well I found a beautiful basalt sculpted head of a man that could have been my twin. Our picture together will bear that out. The museum was filled with the most elegant display of a lost culture, a time long past. It w 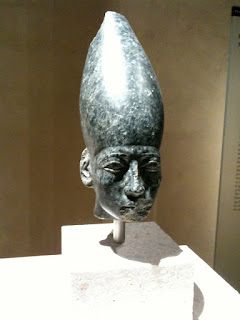 as a show that kept me returning to different rooms just to get another glance to hold in my mind's eye, the camera's chip and more so in my soul. There was something transporting about it. 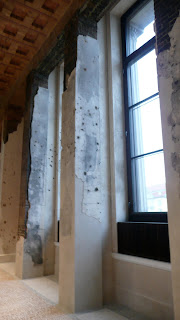 The backdrop for much of the exhibition are walls still riddled with bullet holes from the war. To actually see the remnants of that time on these walls and all over many many buildings everywhere in this city is a very strange and unsettling experience. No matter how you slice it, we in America have been shielded from so much.

Then there are the people here: Berliners, Germans, Tourists from EVERYWHERE and style Galore. Berlin is not a city of Fashion as we know it. It is a city of STYLE. Scott Schuman , The Sartorialist, came to mind and I channeled him.....sort of. You'll see.

Miss you all, kiss you all and wish we were sitting together over a coffee at Cafe Einstein sharing our thoughts ( Starbuck's is across the street, but who needs it?). I'm off...more later.
Posted by Fluff Chance at 4:47 AM

Labels: all photos by Fluff with the exception of Nefertiti

Ancient Egypt has always fascinated me. What an experience, and thanks for sharing it!

Happy holidays, and enjoy the rest of your trip.

I had a similar experience when I saw the TUT exhibit in Los Angeles in the late seventies. I was awe struck to say the least. I was filled with emotion while I gazed bust of the young king. There was a profound connection that I to this day cannot put into words! We are so much more than "African Americans".
I appreciate the photo likeness shared...stunning!
Blessings and Bounty to you my Prince of letters.

I have to say the, walls riddled with bullet holes is one of the things that disturbed me a lot when I went to Berlin, it was everywhere and very emotional for me, it made me cry. I noted some in Paris too, by the City Hall on the Rivoli side.
It is amazing the power of conservation of these past civilizations, makes me wonder what will be left from our post WWII / globalized world in more than thousand years.
Thank you for sharing your experience.
Tschüss and Happy New Year!

Fluff, thank you for the wonderful description, I almost felt like I am there. Wil make a point of making Summer trip to Berlin to see all of it. Fantastic idea with coffee :-) Would love to have a cup or two or three with you :-)))Have a wonderful New Year!

I have to say, I wish you would have taken a true vacation, and left off blogging. You could have shown a few of the very excellent pieces of art and it would have spoken volumes. But the constant chattering was a bit much. No one has ever said to me they will be vacationing in Germany. So thanks for going, and not being afraid to.