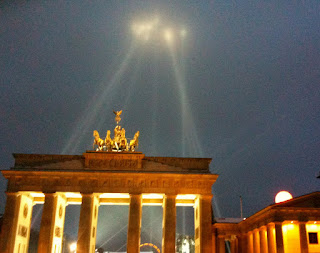 Looking at this past year from the comfort of a foreign city and a safe distance is no less jarring. It seems like I've been running from shadows and searching for a sliver of light. That's what 2009feels like this morning. It was a year of change, harsh realities, tough choices and, ultimately, liberation. It was also a year that showed me that lives do change.

Personally, I'm not big on 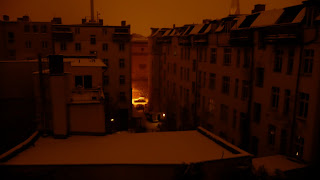 change. I'm a creature of habit; mostly bad ones but some good. T 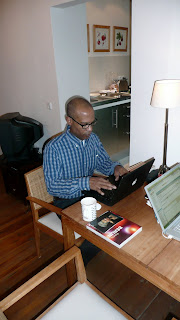 o stop, back up and make a turn is anathema to me. Is it fear of the unknown? Perhaps. It's more fear of new patterns and new obstacles that will call for new exertions. It's probably a laziness of character. That's embarrassing to admit, but probably closest to the truth. The rooftops and lit car is the view from our room. Kinda KOOL. That's Eric, at right, taking dictation. He's a 2 finger typist, so these things take time......

Wandering through Berlin each day has an effect of dulling the facts of ones life and replacing them with new sensations. Getting back last night to the hotel in the falling snow (and ass chilling cold) where everything was silent and lamp lit got me thinking /remembering things 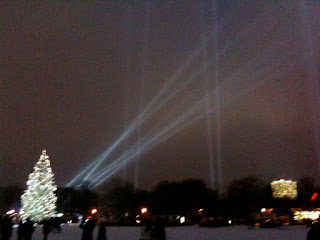 I wanted to keep buried 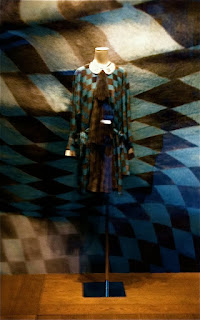 in New York , or at least in the back of this room's armoire. They were thoughts, memories and so many of them steeped in confusion and regret. So much that had been the rhythm of my life and that of those close to me was interrupted; stopped. I was not singled out. It was the case for many businesses in fashion, in NYC and the country. Too late to whine about it but it was a switch, the biggest one of my life. Many other things happened that were unplanned. Upheavals in the marketplace, an economy rocketing downwards and a lot of disillusioned people made for a cloudy year with a bit too much rain.

Fashion went around in circles to a large degree. The opportunities to boldly go where no designer 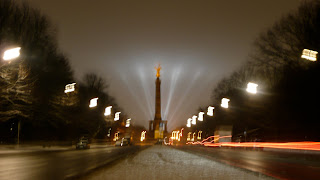 has gone before, was largely ignored for a safer spot in ones own back yard. For that reason writing about fashion was amusing but not always enlightening. It was a good year for bitch slapping biliousness. For that, I 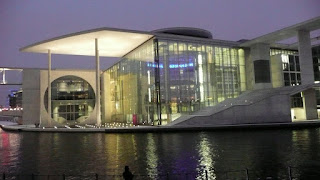 apologize. Nevertheless, when you see something with a "Kick Me" sign pinned to its butt you have to fight the urge NOT to kick. Forgive me, but I was weak. Singling out Vogue, its Editors here and abroad, their grip on the eyes and ears of too many was something difficult to ignore. It is a dictatorship past its due date. A few years more and that regime will be replaced with a new one. Tectonic shifts are in play there as I write. News of a reshuffling will bubble to the surface 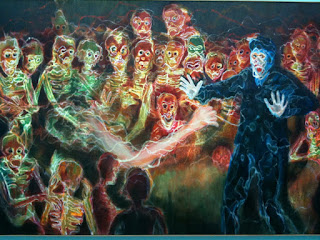 very early in the New Year. So nothing stays the same, and that's good. Can you find Anna in the front row of this painting? Who's show is it?

Berlin has been a feast to the eyes and spirit. It is jammed with museums, amazing old and new architecture and a society of people filled with energy. It's not a slave colony like NYC can be, like the U.S. had become in the last administration. I haven't enjoyed using my IPhone camera this much , EVER. It's so much fun to share these incredible sights 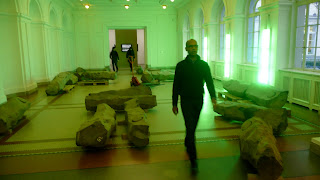 with you. You can't help but be awed by the Brandenberg Gate, the Reichstag, the old buildings that house so many more museums than we have, and tons and tons of new architecture that makes every direction you turn a visual feast. One of our friends here said, "Who needs high rises when you have fantastic buildings you can actually see all of ?" He's right. There is a human scale to a lot of what you see here. I would go further a 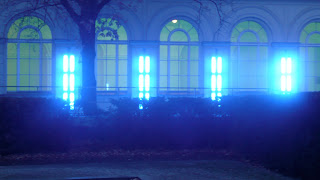 nd say that Architecture is the fashion of Berlin more than clothes or accessories. That's not to say that there is a fashion design community alive and well, but it doesn't make its presence felt in the way architecture does. Fashion is more personal and idiosyncratic, and that's fine by m 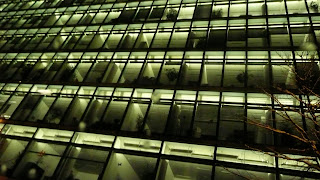 Tonight is New Year's Eve. The city is gearing up for a hell of a blast. Whole sections around the
the Brandenberg Gate and the Tiergarten, a huge park, will be blocked to traffic. People will mass there for a party that will go on until tomorrow. We've been warned not to venture out after midnight due to falling explosives. They 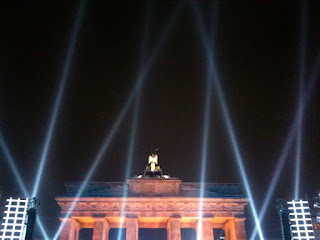 rain down from most windows in most buildings making it treacherous and dangerous to move on foot or in a car. Tonight will also feature a Blue Moon, the second full moon during December. That is an auspicious event. I 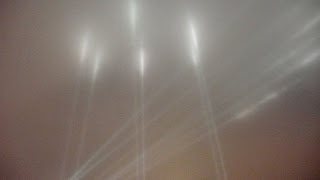 t bodes well for all of us in the coming year. This Blue moon will be the last we see for the next 18 years. Many of us will be grown up, grown old and gone on.

I wish you all a ver 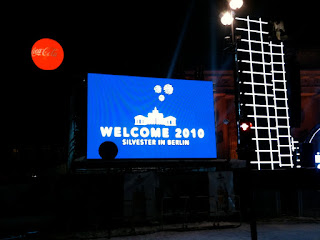 y Happy New Year. Things will be better, they certainly will be different and we can look forward to new challenges and opportunities to change the courses of our lives. In the darkest moments of 2009, all of you switched on the lights for me and Fluff, giving us both a renewed faith in life's possibilities. I would never have believed it if I hadn't seen it. I'd like to do the same for you all in some small way. Until such time, I want to say thanks from the 2 of us. And to my friends and loved ones, I want to send love and gratitude to you all. You're well aware who each of you are.

Labels: all photos by Fluff No Animals were harmed No models were starved or abused

Thanks for this! It was a great message. I've really enjoyed reading your posts for a few months and look forward to continuing in the new year.

Loving your posts from Berlin, and the tone of this one esp. My grandparents were emigrants from Germany and instilled a lot of German-ness in me growing up, so I understand what you mean about the "street style" of Germans. If you are purchasing something expensive it has to be pretty, yes, but practical too. ;-) Looking at your pictures too I was reminded of a conversation I had with a man at a dinner party some years ago about Berlin. He hated it when he had visited and I thought that reflected very poorly on him. I had the most heated argument about it with him if you can believe it. He was a small minded man all around in the end. Best to you and yours. May you, in the new year, embrace the twists and turns in your journey and continue telling your wonderful story. Best!

I also have enjoyed your posts from Berlin. You have captured the feeling of being there in a way that others rarely have.
Change, particularly forced change, is not easy...but presents new opportunities. I imagine you will appreciate those opportunities in a way that you might never had before.

As a child in Frankfurt I didn't remember much and what I did remember vaguely was that my father had a friend who was the head of the cities Polizei and we would go to their house for dinner and I thought his house was a castle.

When I moved there as an adult the architecture was the first thing that I could not get out of my mind by how they preserved much of the buildings from Medieval Times and blended them with the modern buildings.

My daughter was born the year the Berlin Wall came down and I was actually there when that historic event was taking place. I'll never forget that night because all I could remember were seeing these Russian Lada and Trabant cars all over the place who seemed as if they were loss. The western part of Germany also had no idea what was going on that night.

As I've said before, I've been missing Germany since I've moved back to the USA and Christmas there was our favorite time because we loved to visit the Weihnachtsmarkt and this is the time of year that gets me all sentimental just thinking about the great time we had there. Germany is "so schön" in the Winter. Thanks for the wonderful memories.

I Wish You A Happy and Prosperous New Year!

Go see the Stasi Museum while you are there. Not on many tourist maps, but findable. http://www.stasimuseum.de/en/enindex.htm

Sobering in its banality.

love your Berlin posts Fluff. Happy New Year to you and yours!