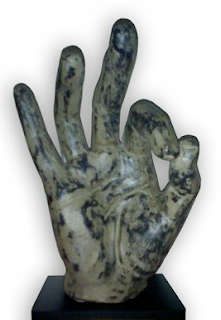 It's difficult to get excited about the big events which are coming up shortly. The Fashion Awards or the Night of the Big 10 leaves little to the imagination. The same names are again slotted into the same categories, and in some cases multiple categories for the 3rd or 4th time in recent years. You'd think there was a drought in the fashion world with designers dying off like the dinosaurs. Well, let me refresh you, there are plenty of dinosaurs left and some baby ones too.
I loose interest when the same 4 or 5 names are put up over and over again. There are many great and talented designers in this country and in this town beyond the tiny handful which appear to be the favorites. The playing field has been dug up and straight down the middle is a barbed wire fence. A special pass allows some to pass through to the sunny side and the rest are left on the clouded one. I don't know why that is, but like so much in life, that's the way it is.
There is a category I'm interested in watching the results of and that's best new designer for women, the Swarovski Award. Two of the nominees are Prabal Gurung and Joseph Altuzzara. These are two very different, and very interesting designers. They bring some fresh blood and a feeling of maturity to the event. For the past several seasons , both have grown steadily and have presented convincing collections. Convincing because they've shown a development that is consistent with their original messages. Some seasons have been stronger than others, but all in all they are believable talents. They also , for the most part don't have the obvious stigma of being "darlings" despite their popularity. Their work seems to do more of the talking than their beauty or charm, though Prabal gets high points in the beauty department....just a fact of life and good, designer genes! I am curious to see how that horse race will turn out. One is a classicist(Prabal) and the other an iconoclast. There's more than enough room for both and I'd be thrilled to see a tie like that bizarre evening when the best Women's award was shared by Oscar de la Renta and Proenza Schouler. I still can't get over that, and I honestly doubt that Oscar has either.
The rest of the evening's categories are not so interesting or particularly nail biting. Iman as Icon, well they're working down the laundry list of faces, next year it might be Hamish Bowles or the Gaga. Accessories is silly, as Proenza Schouler is just coming into their own in clothing design and have barely gotten a grip on accessory design. Yet, they are up for it again fo 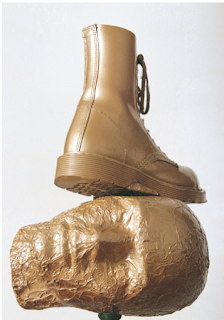 r the 2nd or 3rd time. Marc Jacobs is nominated in at least 3 categories, again, at once and mega designers like Donna Karan is up for 1. There's no sense of proportion, which is so intrinsically important to fashion.
Why isn't Ralph Rucci up for Lifetime Achievement? Who in the last 10 years has produced work quite like his? When Geoffrey Beene died, the baton was symbolically passed to him and no one has even come close to catching up with RRucci in the race. What's up with that? I don't care if you play the game or not or how artfully your butterfly kisses hit or miss the mark. Great talent and incredible vision used to mean something.
Why not a Best Blogger Award with Scott Schuman of The Sartorialist, Tavi Gevinson and Bryanboy and let's not forget Suzy Bubble? They've certainly worked it from every possible angle and have brought fashion to the world in much more far reaching ways than many magazines and news papers.
So, things are a bit tepid in this hot tub at the moment. It reminds me of a rather tasteless joke I heard long ago: "What do you call a Jacuzzi filled with ..........." Well that's a bit too tasteless to finish but you can probably figure it out.
Posted by Fluff Chance at 1:56 PM

fashion award shows are innately amusing because it's hard to imagine an industry more obsessed with navel-gazing already. while i suppose designers find them useful for publicity purposes, i've never actually heard anyone say "oh they won (X award), i must go buy them". god knows there are plenty of award winners who've produced (and continue to produce) really horrendous clothes. as for the bloggers, helpful as they've been in facilitating style as a concept, i'd refer to the old adage of "follow the money". magazines, archaic as they've become, are still where companies chose to spend advertising bucks. i'd be surprised to see an award show (at least for now) give accolades to fashion bloggers who aren't revenue machines. the ones who are potentially profitable become candidates for assimilation into corporate ventures (tavi with target and the sartorialist with burberry). there's already a concentrated resistance to taking tavi "seriously" as it is. i'm sure you'd have to pry an award for her from some wizened editor's cold, dead hands.

Politics
Politics
It's always boring ole Politics
The old gang sit in judgement
And choose...
Whoops!
Themselves
Again
And
Again
Fashion is just as much in bed with themselves as ever...
Well until they keel over.
It's a very small world/town
c'est la vie