This collection is a little like a placebo. You think it's the real thing, and in some ways it is, but in reality it's just a sugar pill. Beautiful fabrics, a cool and sleek presentation, all the attendant hoopla for a major fashion moment, but when the lights go down and everyone files out you realize that what you thought you just saw was really a lite version of something else; something of much greater weight and import. The other something was a collection by Christian Dior back in the golden days of his "New Look". This collection was more "Looks New".

The first indication that there was something vague

ly familiar was when the first suit walked down the runway. It was Dior's classic Bar Jacket with almost the same details and fit, over a long, full, swinging skirt that fell well below the knee. It was a great look, to

tally new in proportion to what we see from most others and advanced in a charmingly retro way. Many looks in the collection aped the same idea and proportion. This is not to say they weren't smart and fresh, they were. The fabrics and leathers he used to create this jacket many times over were rich and technically superb. My quandary is more that the overall presentation, in retrospect, feels like a clever stylist with connections at the best haute vintage couture shops put together the bones of the collection and filled in the rest with variations on th

Well that's certainly how a collection is created and how a successful one works. I just believe in t

he outmoded method of coming up with a more original idea, developing it and then building a collection around it. It's just too easy to buy it all from a vintage store or outbid everyone at Drouot, the Couture Auction house and take it back to the workrooms to dissect and reassemble. The last several seasons have been cases in point: Saint Laurent was the direction from last spring and variations on that theme informed Marc's eponymous collection as well as LV. They are collections that were more the work of a stylist, a master stylist with his finger on the pulse of what editors and magazines wanted. It doesn't feel authentic despite my criticism.

This was one of the prettier collections I've seen, like last season when I felt similarly. Maybe it's because he's riffing off of some of my favorite designers at their most vital periods. I just want to see something that makes me sit up and shut up. The models were decidedly more curvy which was a statement on or against the

starving waif. These girls were more than just 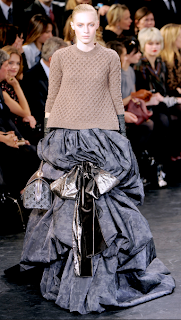 buxom in his clothes , they looked too big for them. There is something annoyingly haphazard about the fit in these shows. Nothing seems to fit. It's like a rush job. Things look ill proportioned and too tight. For my eye, that's not a statement about a new direction. It's more a statement about poor planning. I want to believe that there is a method to the madness and not that he or others have declared that it is the season of the bust (big and full) or that the waist and curvy hips are the new G-Spot. So many dresses under coats or suits with long full skirts were beautiful in their 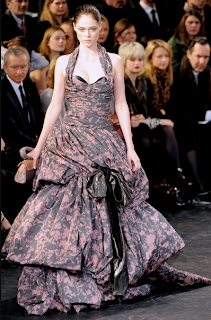 fabrication and distracting in their fit. The evening gowns at show's end were just pastiches on the glamorous gowns from Dior's salon in the late 50's. If you're going to go there, go all the way and don't just drive by. It wasn't so much Mad Men as it was Bodacious Babes. So in some ways these collections for me are not so different than lesser more banal ones because they don't move things forward. They just add a bit of sugar to a cake that is no longer fresh.
Posted by Fluff Chance at 5:43 PM

wow, are you ever right about the fit. that fourth suit dress down to the right really made me question whether the photo was altered to make the model look wider and boxier. or is she even wearing the right jacket, seeing how it's so ill-fitting and appears to shift over her chest.

and the evening gown with the sweater and handbag? it's like her apartment caught fire and she grabbed what she could and wore it out. i can only assume it's some cerebral stab at "individuality" or "quirkiness" (noble as these traits can be) or some other catch phrase stylists and editors use when they throw crap together and hope it clicks. sadly, it rarely does.

haha hughman "what would you grab if your apartment was on fire" My VUITTON!

Could it be that the models, modest curves notwithstanding, are simply too slim for these proportions? Why not just hire authentically large girls?

Can you imagine an "authentically large girl" in some of this stuff?

That evening getup with the sweater and the ballooning poufed, beribboneded skirt is downright ugly.

"They just add a bit of sugar to a cake that is no longer fresh".
YIKES & ouch
Does anyone even eat cake anymore?
Macarons Sweetie Darling, macarons!
Well these peplum affairs do not appeal to me at all.
And I have to agree completely on the fit. Shocking to try to get away with these potato sacks and call them ball gowns IMHO

hey Fluff...
I know this is not quite the place to ask about academics,but could you tell me anything about Studio Bercot? I have heard a lot of good things about the school,but a serious lack of facts and a short list of mainstream alumni has made me a bit concerned.I thought you would know,since you happen to be in the industry...

Dear Anonymous,
I don't have much info. on Studio Bercot, but had a friend who went there years ago. At that time it was a very rigorous and solid institutions. I remember her work load was very heavy and intense. It was an impressive school with very high standards. She went on to work for great companies and now has her own. It's not really so much the school as it is the student and their commitment to the work. You can be a force of nature and get your degree from a liberal arts college in Ohio....... Fluff

i guess you are right....thank you :D

What an eye! Nothing escapes you Fluff.