Another year older, not necessarily wiser. 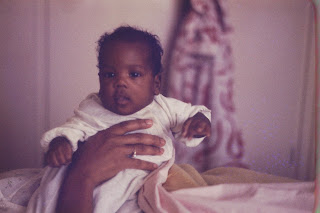 Today is the day my Mother always repeats verbatim the story of my birth. How she was having twins and my sister Donna came out first and then I came 8 minutes later. I used to joke that I was still smoking the joint and wasn't emerging till I finished. Mommie says she cried and cried when the doctor told her I was a boy and he asked her why. She said she wanted a boy so badly and up until I put out the roach she had 2 girls, my older sister Pam and 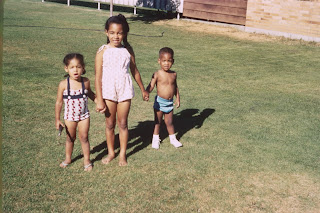 of course Donna.She only asked if I had 10 fingers and 10 toes, which I do, but he failed to tell her that I also had 2 heads. She didn't seem to mind and was just happy I was a boy. My mother cries when she's happy. So there I was and here I am.
It's weird getting older, and now being officially rather old (52) it gets weirder by the day. I read something on Tavi the diminutive Blogging power house. She talked about being plugged in at 13, and I thought about how one can stay 13 far longer than someone who crosses that great divide of, say 45. It seems like she 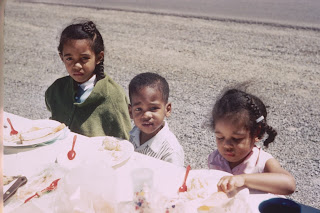 is forever 13 and I just get older, even Fluff is getting up in years, though he lost his hair long before I did. Tavi said blogging on fashion should not be about critiquing shows, that that is missing the point. I know I do that alot and I guess I've been missing the point for a long time. I worry sometimes that if I talk about other things t 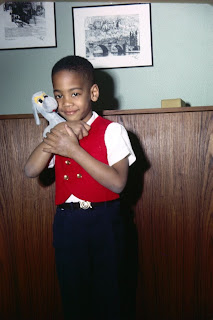 hat affect me, and many other things do, I might bore you. I guess more than anything I never want to bore you. That's why there are times when I pump it out and other times when I'm quiet. I can't say something if I don't feel it. But more and more I feel for things in life that have little to do with the micro world of fashion. So I'm conflicted as to what I'm comfortable sharing.
I read something from Alber Elbaz, with whom I have great respect. He felt bloggers were loose cannons with little knowledge of design and therefore unqualified to comment. I felt like calling him up and saying, "Not this loose cannon". Other than that silly comment, he's got it together.
So the last time I posted a story with Fluff and me at home on the computer someone said, TMI. He 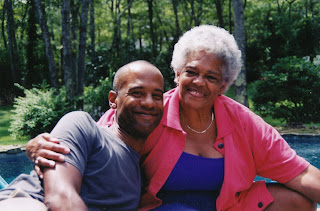 seemed to feel it was unseemly to inject myself so directly into the blog.I hope sharing this milestone with you is not construed as the same, though it probably will. I appreciate all of you and your steadfast loyalty and interest in the things I hav 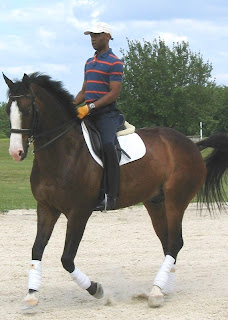 e to say, both heartfelt and pithy. It makes getting on and finding my way less confusing and lonely. Fluff thanks you, Mommie thanks you and most of all I thank you.
Posted by Fluff Chance at 11:30 AM

Eric, you'll always be young in my eyes. Many happy returns. Mei Lin.

Happy Birthday and many more to come

I want to thank your mom, too, because without her, we would not have this little bit of your humanity on the internet. I completely understand your issues around sharing on your blog, but, I, for one, am glad that you did. :)

I enjoyed the "personal interjection".... writing is an extention of someone, and it matters not if you are professionally critiquing or personally sharing.... they are all the same extention of you. I think getting to know someone (even just a little or as much as you can online), enhances their credibility. You are person. Not a typing robot. Happy Birthday! Here's to many more.......

Happy Birthday, never TMI, and who's luckier, you or the horse? xxC

Happy Birthday! Congratulations on another rotation around the sun! I read that quote in iD and I instantly thought, he must not have read your blog. Thank you for your noble work. Might I also say, your Mother is a gorgeous! Her smile reminds me of my very stylish 2nd Grade teacher. Good memories. Thank you for sharing!

I love and understand what you wrote. You're more than fashion. Your style of writing is cause for pause and that's rare in the blogosphere.

The most wonderful of birthdays to you, and thank you so much for sharing. It is truly an honor to see a glimpse of the person behind the blog.

hey you know what? this is YOUR blog and it's a dictatorship, not a democracy. so you can post whenever and whatever you want, t'ain't nobody's business if you do. god knows there are lots of fashion blogs on the internet but it's not just fashion that brings people back here. so you wanna talk about the JD turkeys terrorizing your chateau? go for it. you wanna wax eloquent about how you have a shoe meltdown in the morning when you can't decide flats or heels? knock it out doll. anyone who doesn't like it can go start their own blog and write about what they want but here, on the Emperor's Old Clothes, we are your guests. pop open some bubbly, let's light up a cigarette and you just pour honey. i'll hold out my glass and look forward to every drop.

Happy Birthday!
"TMI" doesn't get it. But we do!! So please continue to write whatever and whenever you want to; the result is always worthwhile, thought provoking and a pleasure.

Those are the cutest pix.

T M I !
Yr Ma looks darling
What does Alber know about blogging?
Stick to pins and needles Alber!!
Gimmeabreak

Happy Birthday, and yes people with brains, like you, write about other things than fashion, even on a fashion blog. It is OK to rant about life, politics, the oil spill and life in general, because we live here on planet earth, and ignoring what is happening around us is not a good idea.The politics of fashion, the money in fashion, where fashion is made and at what cost, should no longer be taboo. Is it an ugly conversation, yes. Designers should stop quoting Marcel Proust and should tell us about the work conditions where their clothing is made.
Cote' cour, cote' jardin ? Bastille day is near.

You make fashion interesting again! Your blog offers an alternate perspective to the marketing driven initiatives of the mass media! Sometimes we need to heat the truth... not force fed what corporations want and need us to believe... so much about fashion today is driven by marketing and not enough about design and art!

I hope you are having a good one and I truly wish you many more!

52..OLD? Never. HAPPY BIRTHDAY!!! You are as young as you want to be. Remember this is YOUR BLOG...express yourself anyway you choose. I will always be interested in your point of view. XOXO, Angela.

(Sung to the tune "Happy Birthday To You")

"Happy birthday to Fluff
You're cute and you're tough
We love your opinions,
and we can't get enough!"

Here's to another 52 years!

Happy Birthday to you darling Fluff! Wishing for all your wishes to come true. :-))) It looks like you have an amazing family.:-) Great smile too!:-)

happy birthday eric!!!! loved hearing about your family! you are a very talented and gifted soul. always remember that and trust that all good things are ours for the taking. see you soon!

Oftentimes in a world filled with insensitivity,that fosters and encourages non personal contact it is refreshing to get insite to the writer and fashion observer that has shared his insite with mem Thank You and Happy Birthday Many Many More

I enjoy your blog tremendously precisely because you put yourself into it. Cliche but true: you can't please everyone all of the time, so be true to you.

happy birthday way belated...i remember your Mother at sfa when you did one of the first shows with me.so glad you are still riding...plenty of space here when i ride...just have creeky hips these days.
all the best to you and yours!

Touching, Puffy. But too personal for my taste. Yes, 52 is 52, and don't believe what the bullshitters say. Life marches on, despite our chattering and vanities, doesn't it? As Cher always says, Getting old sucks !

Dear Anonymous,
Maybe a touch personal, but I'm curious as to why you always call me PUFFY? It's no longer coincidental.

I'm very late to respond, Fluff, but hope you had a good bday; your mom is gorgeous; and I loved the post!