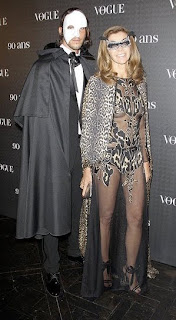 There's nothing wrong with a great party and it looks like there was one hell of a bash in Paris the other night, kind of a frenchy version of FNO only without all those annoying plebes. I would have liked to have gone but I think cats were verboten unlike lap dogs. There's a shot of Zac Posen with his amour fou, Christopher Nicquet whose holding what appears to be their love child. What a drag to go to a blowout with a dog in 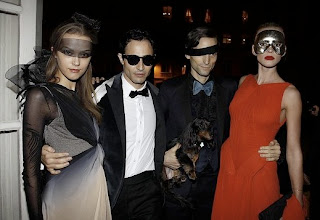 your arms. I can understand carrying a man clutch but not a man pooch. Notice how much the three have taken on each other's looks. They're all sunken cheeks and sculpted noses. That's the magic of love. I think more and more that this BF of Zac's is the caboose that shoves his choo choo down the track. All about Eve comes to mind. It looks as though his collection was better received by many more than me. I've looked at it a few times over the last days and I still come to the sam 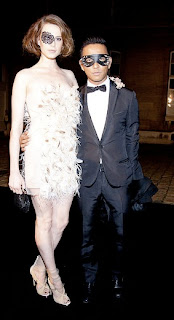 e conclusion. It may be better than others in the past but it's still wanting in my book. A child's game of dress up on a real stage with a real audience. The seriousness of their expressions lets us know that these kids believe they've arrived.

This party had some really interesting guests in amazing get ups. Anna Dello Russo was probably the best dressed of all, as I'd expect, but Carinne Roitveld was no slouch. She looked damn hot in sheer chiffon with little to cover her but some cleverly placed panties, a mask and long locks. She's impressive. I kept wondering where was Anna Wintour was. I'm still wondering. 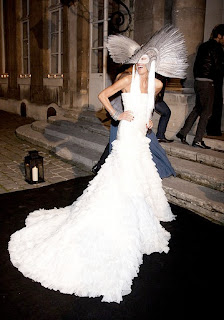 Some of the new kids on the block were there as well. Thakoon and Prabal were in attendance with beauties on their arms. I think Prabal Gurung is refreshing addition to the pantheon but I wish he'd relax into his new found status. Branding one's self is all fine and good but a ready steady pose for the cameras is for the ancient, not the new. His pics look more pursed lips Val. Man-tanned gigolo is a look one can assume when all the good years are a memory. 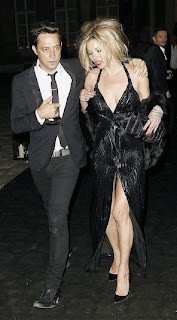 Tyra Banks went for the money shot in a fish net stocking over her head. It was a Helmut Newton moment for sure. She looked hot. Kate Moss looked as though she forgot to read the invitation that stipulated wearing a mask. Perhaps she figured that no one would recognize a dishevelled blond looking like she'd been on a bender. Woops, isn't that the way Kate Moss looks much of the time? Whatever. I put on my tux and a plastic grocery bag on my head with slits for my eyes to look at these party pics. I wanted to feel apart of the proceedings. It wasn't til the room started to swim and I felt faint did I have the feeling I was actually a member of the gang. I guess whenever I'm feeling low and like an outsider who'll always have his face pressed to the window I can just slip a plastic bag over my head and feel better. Happy Saturday everyone and don't forget to Party Hearty!!!
Posted by Fluff Chance at 7:30 PM

yes, that ADR headdress was the standout. what intrigued me so about the many pics was that Carine R. was utterly transformed. what with smooth & perfect tresses-along with the mask that covered her signature. She looked gorgeous-but the mystique All admire was a no show.

I do not understand why people worship Anna
Dello Russo. She is at best a blatant exhibitionist and at worst a train wreck. Anyone can take a designer garment off a hanger, put it on and deem themselves stylish. She is not stylish. She is hopelessly garish. I really wish people would stop photographing her.
As the buddhists say WAKE UP! I second that by saying ENOUGH ALREADY!