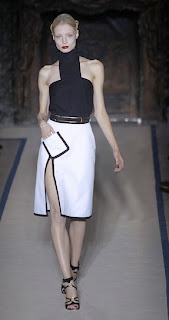 Maybe Stefano Pilati isn't the rube I thought he was. Considering the effect the YSL retrospective has had on the planet, and not in a good way in too many cases, it was surprising that Pilati would take his inspiration from that show's essence and use it to fertilize his collection. I would have expected the same from Gucci, Marc Jacobs and countless others but instead they decided to let YSL do all the lifting with little or no effort on their parts. If I saw another ruffled peasant blouse or color combination of cerise and navy it would blind me for life. It was pretty exciting to see such a sure and complete collection where almost everything was a feast to the eyes. This company has been a non starter for me forever but I think now I was maybe a bit hasty. 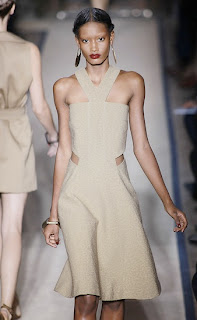 l had something he's lacked in the past: clear, defined lines. The long skirt slit with the askew piped pocket was a statement and not a suggestion. Blouses in silk charmeuse and very crisp cottons had the essence of YSL's lantern sleeved blouses and peasants of the past but non of the verbatim details. These wer 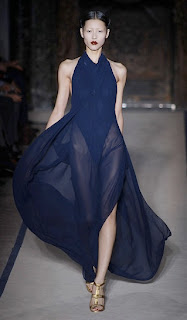 e a hybrid of sorts that expressed the freedom and romance but in a different translation. The dresses that followed, some in thumb printed chiffon , others in tan crisp cotton with bared midriffs were classic ,elegant and modern. These pieces were timeless in the same way so much of what Yves did in the past. There was real

dignity in this work which has sorely been missing in the past. I found myself musing that we probably wouldn't see these clothes on Anna Dello Russo's shoulders precisely for those very reasons. She doesn't do dignified.

The setting of the show was a stately hotel particulier with gilt ceilings and uber-elegant rooms which seemed appropriate for such a cool, clear and refined presentation. I'm sure the audience loved the proximity to these clothes they wouldn't have had at a venue like the Grand Palais. This setting only added to the seriousness of Pilati's efforts which is a stark contrast to many many outings in the past. He seemed to have lost interest in sho

cking people with flaccid attempts at irony. Even his decision to limit evening gowns and focus more on jumpsuits, draped silk evening pants with chiffon blouses and re-imagined "Smokings" was an inspired choice. It seems he has taken his place among the greats of Paris this season. Even Stefano looked invigorated by this collection as seen in his bow at the end.

For everyone who yearns for a rehash of the greatest hits of YSL they will be able to find them at Gucci, Jacobs and lots of other houses and no doubt at trickle down emporiums as well. But for those who want fantastic clothes that are the next generation of the master's oeuvre they only need to return to the source.

Images: Courtesy of GoRunway.com
Posted by Fluff Chance at 9:46 AM