Grim determination is the face of Ungaro, or more specifically of Anna Dello Russo who "walked" in the show. When does one draw the line at the excesses of vanity and step away from the gun? ADRusso is just one symptom of this disease. It was a parade of Giles Deacon'

s pals wearing his ideas of French fashion. They were pastiches of clothes shot through with ersatz glamour and hyperbole. All sheer laces, de rigeur draping and Lesage embroidery that came off looking like droopy, cheesy tweeds bought on 8th Avenue were the stuff of this collection. The principals have been flailing in the glaring light for direction and purpose only to come up with a dilettante designer with retread ideas. Reconnecting with the DNA of the house shouldn't mean TKO looks or nighties

that are all T&A and no imagination. It was obvious that this was more smug wink at Deacon's fans who base their loyalty not on his ability as a designer but by his popularity as a personage de la mode. To my eye there is a huge divide there.

I liked the laces, I've always had an appreciation for cleverly designed lace that draws from the past and shoots towards the future. I'm just not a huge fan of clothes that lay women bare. In private no problem. In public I find that I don't know where to look. Its like walking into Abercrombie and Fitch and being confronted with all but naked young boys with only a pair of jeans on, riding about 1/4 inch above their "dangly bits". Know what I'm sayin' ? I get uncomfortable. The same can be said for wom

en dressed in a filmy layer of nothing over bared breasts and a thong. I'm just not that kind of guy, I mean cat. There was a lot of that in this. What was good was a beautiful black crepe draped dress like a sarong over a lace skirt. It was the essence of Ungaro but refreshed. The same could be said for a gown that was all huge liquid skirt and deep V top with delicate appliques of blossoms. There was also an abbreviated shift with a surface of over scaled graphic sixties blossoms that was a happ 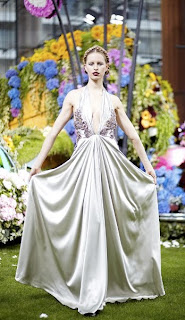 y dress. That's pretty much where the fun stopped. In its place were exit after exit of silly clothes with no sense of humor. Several of the models were women who had worked for Ungaro when he was at the wheel. Perhaps out of kindness or party-addled old age, they were quoted as saying they preferred this retread to the original. I find that disingenuous. Just because you're a model doesn't mean you're required to be an idiot. You guys check it out and draw your own conclusions. I'm sure my view will be a less than popular one but that's life in the slow lane. I've found that the fast lane on most highways is strewn with the bits and pieces of retread tires. Drive with caution.


Images:Courtesy of GettyImages
Posted by Fluff Chance at 11:27 AM