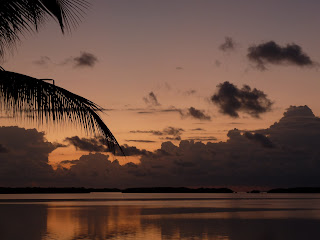 Well I wasn't, but countless others were. That's Key West. It's the end of the line in more ways than one. Besides being the most southerly point in the US, it's home to a lot of people who want to dangle their toes in the abyss. I can see the attraction and joined them for a few days. It felt great and I had little urge to look back, let alone return. It wasn't the cruise ships backed up to down and out rum joints or even the man in the wheel chair parked at an empty bar one morning at 10. It wasn't the fact that his head didn't reach the bar or that his chair had a side car holding an oxygen tank, either. Don't feel bad. I'm giggling too. You can't make this up. No, the thing that turned my head and drew me back was a Tea Bagging geriatric couple who'd just gotten married and were staying at the same guest house I was hiding out in. This was a gay guest house filled with gay guys and a few lesbians. This couple apparently loved gays as much as their ultra right wing politics and insisted on sharing their views with anyone within earshot. That would be everyone because we were all crammed into a space that resembled 28 Barbary Lane in Armistead Maupin's Tales of the City. The blushing (thanks to copious amounts of rouge and spackle) bride's wedding dress was a Vera Wang and yes it was strapless. HONEST. The reception was by the pool which was 4 feet deep and 8 feet square. TRUE. It was so spectacularly unremarkable I failed to document it. The cake from the freezer of the market next door was served with raspberry chocolate red wine. The entertainment was another much older woman everyone called Ma who sang bawdy songs and was helped by her daughter who had to have been about 70. Ma was sporting a vest with floor length fringe, a bikini top,loud colored bell bottoms, orange Go-Go boots and a cap that Austin Powers must have borrowed for his films. I'm DEAD SERIOUS. This all took place on election day. You can't invent this S%#T. It wasn't the boozy incoherence of the setting that felt like a heart to heart with Vera, but the crazed look in Ma's eyes (who looked disturbingly like Anna Wintour) that shocked me back to my senses. I realized then that I couldn't outrun my past. The only thing to do was to face facts and return to the scene of the crime. Susan Posen could "pursue other interests" and leave the nest though she was the mama bird. Brad could leave Rache and Rodge, Demi and Kate and Cameron to boldly go where no assistant stylist has gone before. I just know that I can't leave. I have to stay. There's a show (somewhere) that's about to start with a front row seat with my name on it (somewhere). As God is my witness, I'm going to sit there and write about it. And you're going to read it (maybe). So I drove back to Miami, boarded a plane, finished watching "Eat, Pray, Love", didn't cry and came home. If I didn't have this killer tan I'd think it was all just a wet, wild and wonderful dream in a fantasy setting of old, eccentric houses painted pastel colors, over taken by lush tropical foliage and marauding packs of feral cats who happen to love to be fed and petted.
Posted by Fluff Chance at 8:05 PM

Fluff, I can't thank you enough for this. I know - it must have almost hurt to leave such inspired and inspiring surroundings behind you. It's a dirty job, I know. But someone has to do it.

Mainly, though, I thank you for your edifying tales from the End of the Worl...uhm..Key West. I've had a terrible weekend - but you gave me some terrific bellylaughs to finish it with and as I'm sure you know - with laughter, you can endure almost anything. Even going back to the daily grind!

So thank you for that, too!

Fashion needs you. I think there is a large portion of people who want to say what you do say but haven't found their own voice, or are fearful, but I appreciate honesty. I think if you love something then you shouldn't be blind to its faults, and inconsistencies. Nothing is pure, nothing is perfect. Your refusal to sit back and be disillusioned is inspiring to so many! I only started reading about Fashion and the Industry itself about 3 years ago and the face of Fashion has changed immensely since then. For the most part now I think it's begun to mirror the world of celebrity very closely. Everyone is so busy advancing their agendas, they've forgotten it is an art form. But even within that world, there are always those rare independent voices who are willing to push boundaries. In Fashion, you are one of those rare voices. Everyone else will have their 15 minutes. You will prevail. The truth always does.

P.S. Texas is beautiful as well! If you ever want to explore the San Marcos/Austin area let me know. I do believe I'll be attending Texas State next Fall. Just waiting for that acceptance letter to find its way in my mailbox...

Dear Tarleisio and Amber,
WOW. I'm very grateful to you both and everybody that takes the time to read this. Fluff is more sure of himself than I and so your words of encouragement and appreciation go a very long way with me. I struggle over this blog more often than I'm comfortable admitting and this makes me second guess myself a little less. I can't say enough how much I appreciate you all.
best, eric and Fluff

Where are the pics? This sounds to delightful!!

Keeb,
This photograph is Islamorada in the Fla. Keys about 2 hours above Key West.I shot it at sunset the night before moving on to Key West. It's paradise.
E.