For those of you who may have watched Charlie Sheen's twisted rant on every channel this past week, you are no doubt hip to his exclamations. His grand delusions can only be approached by the likes of John Galliano only more clearly articulated. If only Charlie had slurred more we might have escaped his unhinged interviews with something less than a crystal clear image of his particular brand of crazy. Between his bottom feeding "goddesses" and the attention he receives from every possible corner, I'm not surprised that he feels as though he has the tiger by the tail. After all, tiger's blood is coursing through his veins.

Zac Posen showing his collection in Paris is just as misguided. Both artists are on an ego trip to never, never land.

The opening images on Fashionologie seemed promising as the black silk gown had a wonderful shape infused with a quiet drama and subtle detail. It was a few exits farther out that I started to think I was looking at the equivalent of a wax museum of greatest looks of deceased and/or retired designers. I have nothing against homages except when they are little more than plagiarized editions by way of cliff notes.

Luxe croc was cut to resemble McQueen shapes with Mugl 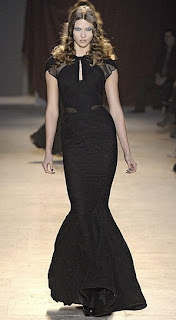 er proportions a timely impact. Bias-cut charmeuse gowns looked like Galliano creations from his early days prior to Dior and still other looks resembled Rochas, Mugler, Balenciaga and Nina Ricci. Color appears to be one area where his imagination is challenged. Throughout the collection color was flat, dull and depressing which may have been a deliberate choice. Still the styling did little to lift the pall which settled over the presentation.

That is all fine as fashion is an excercise in reinterpretation but to show a collection that followed those lines so closely seemed unwise in the very city that gave birth to them. Overall, there is a feeling of lifeless, rote design that is meant to command the attention of the press and an international audience. Instead, like Charlie, Posen is merely winning his own game of solitaire. Like Charlie, Zac's mantra is "Defeat is not an option".
Posted by Fluff Chance at 4:23 PM

Could someone tell me WHY he's showing in Paris at all? I've been out of the loop, so what's the story behind this move? I was most surprised when only Posen's diffusion label was on the NY schedule, but was stunned to see it on the Paris schedule. What gives?

Zac Posen's basically a mediocre sportswear designer IMHO. I've always wondered why Anna Wintour championed him so much back in the day. However I wish him luck in Paris. It's good to see one of the NYC crowd venture out a bit and try something /some place new. It may have an overall positive affect on his creative output. Sometimes a change of scene does.

I'm no fashion expert by any stretch of the imagination, but if you can't capture my imagination, as an average consumer and fashion enthusiast, there's something wrong.
T.R.

Good point Joan. I've never felt that Zac Posen deserved all the adulation that was given to him. I really think that people were easily seduced by Zac's trail of the train. Fashion hearts seems to go aflutter when a train is attached to a dress, but Zac's train's have long since went of the tracks. A snore, a snore, a most definite bore...