Am I the only one who's noticed a mini-trend of designers returning to art school? From finger painting (Adam Lippes) to the moody style of the Color Field school (Bottega Veneta) there appears to be a decidedly artistic bent to a few collections this season. As refreshing as this direction is I was fascinated by the methods Oscar de la Renta employed with his 60+ piece Resort collection. The first thing I noticed were a line up of models, all of them stars of the international runways looking almost miserable under headgear that resembled nothing short of YSL castoffs from his Impressionist collection from 20 some odd years ago. Cubist inspired broad brimmed S

panish dancer hats crowned the heads of an army of beauties whom were made unrecognizable. The ghost of Picasso was busy at work on the surface of these dresses. It brought

to mind a midnight raid on the galleries of the Met, but one performed in the pitch darkness. There was little rhyme or reason to the work beyond its resemblance to his Cubist period with a generous helping of the sort of hats that filled Westminster Abbey a few weeks ago. It was about 40 exits before the pieces began to fit and an elegant subtlety took the place of awkward, too literal representations of that period in art. At that moment the story line dropped and was traded for one th

at was so familiar I could have predicted each subsequent look. Here came the faille cocktails with square-cut necklines, fitted bodices and p

opover skirts, the frothy, flirty, ostrich feathered souffle, the knit cardy over matching sheath which is a tripartite homage to Anna, Adolfo and Coco, and the regulation silk chiffon stunner dripping in a degrade of paillettes, beads and high-ticket thread work. There were some pretty numbers in the endless defile like a smart black coat over maillot with matching drawn white lines, a white on white shift with what appeared to be flakes of the same resting on its surface and a few delicately d 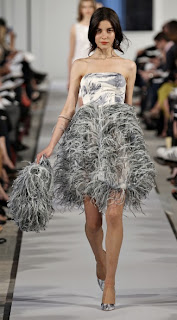 raped georgette gowns in pale greens and blues, but they were tough to find under the leaden styling and ceaseless variations on a shaky theme. I'd love to see a collection with new an

d unexpected shapes, a concerted effort to push the boundaries. I used to look forward to this collection more than almost any other.
On 9/11 when I had a full book of appointments for my collection and was actually done on time I had an invitation to see Oscar's show that afternoon at 1:00. In the shock and chaos of that morning and the realization that my dreams of that season were a tiny puff of attendant smoke to the much larger cloud 40 blocks south, I sent my team home. Anton called from the U.N. to say he'd meet me and we'd walk home together. In my temporary insanity I argued that we couldn't head north until after Oscar's show. Nothing was goin

g to deter me from seeing his collection even if I would have to go alone. Anton kept trying to convince me that there would be no show but I disagreed. I 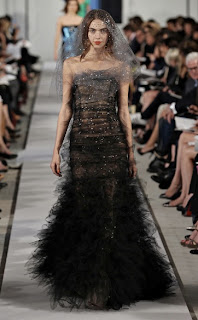 was holding onto that dream that somehow seeing something transcendent and beautiful would help me make sense of the carnage. Well there was no show, thousands of lives were lost and it was the beginning of a long slow end to a way of life we'd all come to know. I missed that beauty then and I miss it still.
Posted by Fluff Chance at 5:06 PM

Great observation. I briefly looked through his collection and though it's quite nice, nothing really sticks to the mind.

You must write your book. On another note this show screams "Adolfo on LSD". The later part of your missive describes so well , by your Proustian Oscar analogy, what happened to us on 9/11 .
From Proust; " It comes so soon, the moment when there is nothing left to wait for."
We are not there yet right ?
Waiting for the book and the scent.

very interesting observation. but it also has a level of creativity to the clothing as well.