This was such a satisfying collection. Looking at it I had to ask myself what the point is of the mega spectacle, the towering inferno of lights, music, steel beams and glass. Can fashion that's presented in the most artificial of environments withstand the harsh light of day? Looking at Chanel's Byzantium collection of last season all smashed together on a rack in a tony shop for a trunk show without the benefit of a Karlie Kloss or even the attentions of a steamer, still looked mighty fine to my eye. The buttons alone made the rumpled wool jersey of a few dresses absolutely irresistible. Still there was a feeling that the clothes were meant for a

world more lofty than the Miracle Mile in Manhassett. I don't have that same feeling when I behold Alaia. This is not a diatribe coming from some powder slurpin

shopping bag pumping Alpha-douche. (part of that description was lifted from some guy's profile on Manhunt. It was TOO good NOT to use...) I like Alaia but I'm not going to go on the record saying he is the Messiah or Meshiach, or what have you. He is damn fab though. His collection with its patent crocodile in black, celadon and claret, whether real or faux is just beautiful. The shapes which are essential to his oeuvre (love that word, especially when you accent that last snotty syllable) are just so clean, feminine, sexy, evocative. They are the 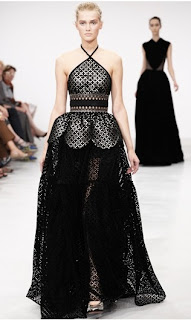 perfect vocabulary for a woman and without the fuss of a 150 seat orchestra. The coats with their shaped and dropped waists and full, bell shaped skirts are the only ones of their kind around. Givenchy mastered them way back when as did Balenciaga and Oscar to a degree after the masters. But now they are impossible to find except for one's well stocked memory or thank god, here in Azzedine's hands. The wool Jacquards with their subtle patterns are so complex in their simplicity. The cut-out whatever fabric of the black dress and the gown near the end with a layer of silver silhouetted underneath 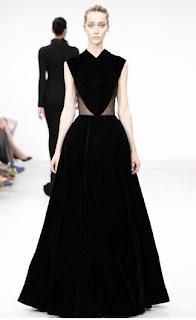 creating a shape like a pannier and a quiet shot of color was just something to behold. His brand of ruffles that appear to be scalloped on the edge by hand in layer upon rigorous layer spilling down the narrowed length of skirt is at once flirtatious and then again not. That too tired adjective "empowering" seems particularly apt for the message his clothes send. The fabric that moved me the most was his use of velvet. Its just the most romantic of fabrics the suggests so much as it brushes the surface of every one of our senses. The depth of color in claret and black is like an abyss. Perhaps, the odd twist of an Elizabethan feel to the clothes is what speaks to me about his work. It was the first period of history to spark my imagination as a kid and it still does to this day. The fact that he hadn't shown a collection on the runway in 8 years and did not invite anyone from Vogue USA was probably not lost on anyone. Its unfortunate that they missed it, just like last season's Ralph Rucci, though a couple of members of the Vogue chorus were in attendance. I wish that I'd been there. I'd have been tempted to stand in line at the Kool-Aid stand.

photos courtesy of tenmagazine. special thanks to Beth Terry!
Posted by Fluff Chance at 8:59 AM

Agree with you completely ... stragely I'm seldom a Chanel fan but the silhouette, it's always that isn't it, killed me ... the tight bodice and full skirt made me lust for little jackets and not my beloved Rick Owens slouchy cardigans. Azzedine is wonderful and of the heart, very touched at the accolades and treatment. My former husband, Charles, and I first bought him in '82 and that same masterfulness had other manufacturers in suits standing respectfully to watch him cut a dress. We opened a boutique for him and it was monstrously successful, his things were perfection. It was not possible to continue without collections on a regular basis alas. He is kind and sweet and his honesty is a thing as beautiful as a coat that I still lust for from years gone by.

wonderfully cut. i would love to see some of these on the red carpet.

I met him in 1973. He wore a " bleu de chausse" Chinese workers simple outfit, he had it in every color, extreme simplicity, extreme kindness. It was my first backless dress...He was in Julian Shnabel's "the diving bell and the butterfly"fabulous movie, for a brief moment, in a photo shoot.He looked the same, kind face. Shnabel's wife Jacqueline Beaurang had a store in Soho years ago with his line. Women love him and he loves women. A true love.Jean Paul Gaultier and Alaia, true grit , love them to death.
What a great collection ! Now that makes me happy.