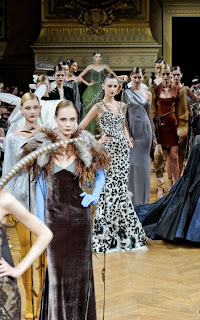 This is a very pretty petting zoo. It perfectly exemplifies the heaven and hell of theme park design. His mission to create couture manifestations of things that fly, trot, prowl and slither is a great point of departure. In many cases it is a potent and exciting one but in others a bit of a concrete pump chained to his feet. The dressmaking for the most part is sublime. Especially, the lace gown

with its artfully placed design that makes a feast of the model. The addition of pheasant feathers to the bodice and the lone wing rising from the center of her head was probably the most beautiful of his kingdom. The swan (le Cygne, I imagine it was called

in the program) was one of the unfortunate beasts with her saffron tights which made her look more Princess Valiant than a bewitching bird. It was at moments like this and also his ant with her cut-outs at the shoulders and the deep slits up the sides that made his theme awkward and

forced. The couture means to me fit of the most rigorous sort. These clothes are supposed to be cut within an inch of the model's life, not gaping and yawning around her hips, absent bust or insect thin arms. So when I see a gown that looks as though there was not enough time to be properly fit and altered to the body of the model I begin to ask questions. The moment you start to puzzle is when the pieces begin to fall away or worse, become hopelessly lost. With that said, i enjoyed many of his creations but can't help feeling that he may be not yet ready for life in the wild.
Posted by Fluff Chance at 12:29 PM

The first thing I thought was: remove the bloody feathers already ! I don't know.....It's " LA BIBINE " all over again ! I loved Alaia. So I still love something! We had a monsoon yesterday , the force of the water running trough the desert, the lightning, the sounds and smell of the Sonora...Dress 22 from Alaia at Style.com looked like my Sonora.

I agree with you! I did a post about his collection to. He has potential, but oh the way he used feathers and those yellow tights ruined it for me! This look worked great for Natasha Khan three years ago. And now the pop recycling machine that is Ke$ha has just in my mind made this presentation of feathers (and tights) just an absolute no-no.

Which makes one ask, in order to be taken seriously, should high designers make it appoint to stay clear of references that are prevalent in pop culture? Normally I would say, "NO!"

However, pop culture right now is such a wasteland right now (reality television is now even popular in France) that designers maybe need to be tread carefully.

remove the sleeves on some of them, and the frou frou on all of them, and you have some well cut dresses that would be lovely on duchess kate.

Agreed .. this is what couture can look like. Irresistible fabrics with tender finishing and fit. Love the restraint and classicism that is so fresh in a season of some pretty contrived overdone hands.