When I look at fashion I don't generally go digging for a back story, I avoid programs that discuss a designer's "inspiration" and I try my best not to read into or make sweeping pronouncements as to the psychological or emotional state of the creator. If the thing looks dark, it looks dark. When it's bright, well then it's bright. What I'm after is whether or not the work succeeds on any or all levels; is it beautifully made even if the thing is studiedly un-made? Does it elicit an emotion response either positive or otherwise? Is there a soul somewhere inside it or is it lacking a soul or spirit? Does it succeed on its own or does it need some sort of crutch? Does it make the grade, or is it consistent with the expectations of its place in the larger spectrum of where its supposed to be? In other words, is it "shit 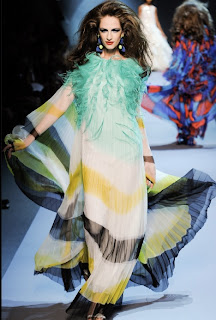 or Shinola"? Granted, its a murky thing that experts in the fashion field are often at pains to define. Objectivity is all but lost in the bargain but still fairness should always have a seat near the front. All of this patter is leading to my comments on Dior and Bill Gayttens efforts.
Looking at the collection, it's almost impossible to view it without imposing the Galliano standard on it. Dior and Galliano are inseparable which makes anyone else's attempts at creating a Dior collection a lost cause. But if you put that thought in your Birkin and take off your Tom Ford sunnies and look closely, and past the Memphis colors/combos of some exits, take the clunky jewelry and silly "fascinators" off some unfortunate heads you end up with more than just a couple of marvelous cout 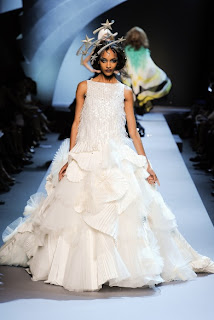 ure creations. I admit that the rigorous fit, unerring choice of colors and some proportions that Gal 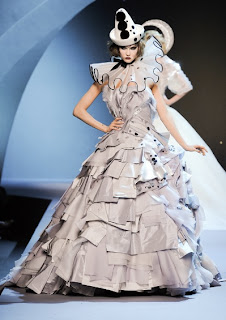 liano achieved while flattened in a K hole was missing, still there was music playing on that runway. To say that it was an abysmal failure or an unfortunate parade of misguided ideas with no rudder or Admiral is a little off the mark. It's also interesting that other work that was presented on the runway this week, after Dior, was strangely similar and managed to escape the hatchet. That's all I'll say. These images I've included are just a handful of things that spoke to me. Look for yourself and see.
Posted by Fluff Chance at 8:48 PM

Ok, so just for you, I plugged my computer into the Ld flat screen to view style.com better and see if I had missed something.Ok, 15, 21,22,30. And that's pushing it ! And I am not sure what I am looking at ! But your reader " linesheet" is right, bad styling, bas makeup, bad hair.
On the other hand I looked as well at Jean Paul Gaultier's collection and I loved everything, I could wear all of it, the great jackets, pants, suits, dresses, the entire lot and feel like a million dollar ! Problem is,I already have it all from years of collecting his stuff. He showed men as well and it was so-so. JPG has got a great sense of humor and he cuts well. It's not " la Bibine !" One can wear that stuff and feel alive.But yes, being there done that !

It looks like a Central Saint Martin's senior thesis. Idea clothes. Who cares?

Compare this to the Givenchy couture (which is intelligent AND beautiful) and it looks all the more amateurish. Or Chanel which are real clothes, not academic exercises.

Sorry, but British fashion is on par with Portuguese or Canadian fashion & it's high time to relegate it to its rightful status. There, I said it.

This collection is a desperate attempt to hit way too many keys at once, but the thing is that unless one has talent and ability, fabrics aren't gonna make a dress and too many notes are likely create dissonance rather than some beautiful jazz melody. :(

ok.ok. I hear you. Listen I tried and still feel that no one stands up for the guys in the back room. They's sooner give all the credit to the cretin with soiled underpants texting in the front row.After LV's resort the press only wanted to give credit to Sofia Coppola who didn't do more than text a few cryptic ideas and whine that there's nothing to wear in any of her eleventeen closets. So any way. I'll give it a rest.....xofluff

the Pagliacci gown isn't awful if you remove the silly hat and that ghastly collar but, it has nothing to do with that billowy black, yellow, white number, no? What's the common thread? It's missing, that's the problem as I see it. Those flowy numbers seem chic to me, they have potential.
Had he just stuck to those billowy ensembles he might have escaped relatively unscathed, however (and I think management had lots of say in the matter) they showed those big "faux-galiano" gowns in the show and it made no sense all together. The gowns were trying too hard to be like his predecessor's work instead to jettisoning the whole thing and starting anew in a completely different direction.

Hmm.. all I can say is after talking with those in the know... Yeah, umm...more or less? @ both co. it was like 2 chickens without their heads runnin' round...Bill is a nice guy... but doesn't command the same awe and devotion as his predecessor...I know. Still, I wish him the best and whoever comes in after that they can transform Dior once again....most likely? probs not as well as Galliano.

It looks like Haute Couture, brilliant clothes, all the fripperies and fineries, and the only thing missing is a stylist. It's so mean and evil to assassinate a very good designer who was subject to Expectation. The styling on a runway is as much a part of the play as the clothes alas. Without a flippant hand toying gently with perspectives and weaving a story, there was that Demand Not Met, it's dress up.

On a rack, set on a white muslin floor with care and kindness, these clothes are quite beautiful and possibly accessible.

Sad that a collection and a dress, regardless of the price tag, will be judged for the presentation.

No designer should be castigated for a presentation ... except for John's fantasies, a designer needs others (Needs) to show it and with the expectations heaped on Bill, hats off to him.

I don't see an amateur stitch in the lot.

John is a separate subject.

The show clearly lacks the aesthetic Galliano set for Dior. It's Couture not ready-to-wear after all.
Also the finale is obviously inspired by the harlequin piece that Galliano designed for Dior's Fall 2007 couture show.