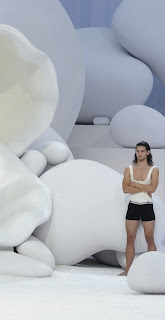 85 looks.That's a lot a looks. If the big pebble beach set is a metaphor for the multiplicity of ideas to be found in a split second of fashion's beached consciousness, then why not a collection that is more like 4 rolled into one? Now I feel like Cathy; more scientist/analyst than mere fashion journalist/blogger. Still there was everything in this collection including the kitchen sink. How do you say that in French?
It all looked seductively simple with tweed reduced to a relaxed game of warp and weft on net with a mysterious embroidery of a thin black line squaring off in opposition to itself. I liked the off handedness of it. Luxury can be as simple as a dot

or a dash. Models appeared to stroll along this phantasmic beach clutching con 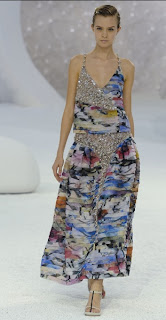 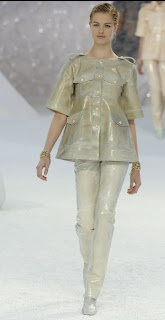 es that are left when the tide recedes formed the backdrop of the scene. The suits were so clean in white and putty almost like he took a hint from Ralph Rucci's recent spring collection, with curved cardigan and bolero shaped bodies and round full articulated sleeves over deluxe white jeans or sheared and shirred chiffon minis. With all the recent biographies out on Coco, her lovers, supposed Nazi sympathies and more newly uncovered tidbits Karl perhaps is busy k

eeping all eyes on himself. The dresses that came early on after the suits in beautifully pleated chiffon prints had a very post-Poiret feel like the tea dresses Coco wore as a young kept woman in the house of Boy Capel. Still he seems to have sworn off of decoration relying on a line of black to underscore an idea. 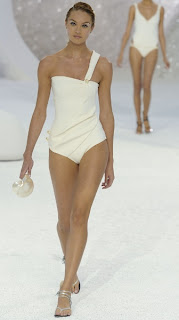 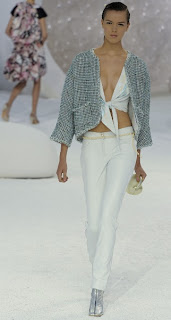 ttons and nary a single strand of pearls to be found. My impression was one of luxe sport almost like exercise gear in suits and separates. The models had a freshly showered look to them without makeup or coiffed hair as though they had just come from this futuristic beach. Then the collection began again with another lineup of day suits and tweed jackets over puffed, teased and poufed organza skirts and beautiful pale printed abstractions on pleated chiffon, only pleated horizontally instead of the regulation vertical pleats awash on so many

other runways in Paris. Some dresses in this segment had rather odd proportions that he delivers now and again. They propose a new shape but rarely go further than just a suggestion. Still they make you think and they also show Lagerfeld as a unique wanderer on the beach, digging away at some possible buried treasure that we've all yet to consider. The tweeds were more laden with decorative touches by way of fringed strips of the same dividing the planes of the jackets and skirts. The colors like a pale tobacco were so soothing that you felt this overwhelming calm like the center 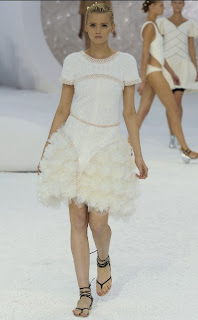 of a vast storm. Then another collection took up where the previous dissipated with fantastic bathing suits like delicious minimally draped cocktail dresses minus the skirt. Then, just like Ralph Rucci and his glorious collection of a couple of weeks ago, he shifted back to white in knit and lighter than air tweed suits, an array of pale pastel short evening dresses and ending with white and black. They looked more like forms from beneath the ocean's surface in random threads twisting over grounds of tulle. Nothing had the look of man-made.
As familiar as the Lagerfeld/Chanel lexicon has become he never stops pushing the boundaries of shape and uses of decoration. He always talks about being unsentimental and leaving behind the past to find the future. This show felt very personal in a way. Almost like he's racing to say in design as much as he does with the spoken word. I think he's aware of the passage of time and perhaps wishes he could control it like he does his various and vast empires. Its ok to value today and yesterday. Tomorrow is not a given.
Posted by Fluff Chance at 1:40 PM

I'm thinking his "collection" is really 2 or 3 in one; a collection for the older, more mature customer; the younger ladies who lunch; and young girls who want to dress edgy. I guess if you're spending that much on a show, you may as well throw out a lot of exits!