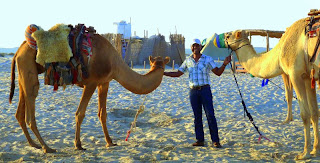 That's not sloppy spelling or the effects of too much rich cat food when the dry stuff or a stray mouse will do. I've just been to Qatar and the experience was nothing short of exceptional. It was about a 8 day trip spent with the fashion department at VCUQ (Virginia Commonwealth University Qatar) where I was invited to speak at their Crossing Boundaries lecture series and to work with Fashion design students sharing my experiences and critiquing their work. Nothing new for me as I've played this role over the past ten years at Savannah College of Art and Design, Pratt, Parsons and Kent State University.

What was unusual was the se 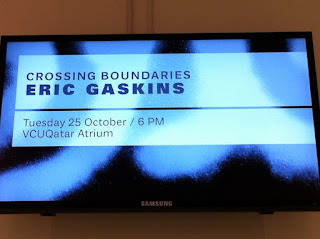 tting and the beauty of this extraordinary part of the world. The reception I received was so warm, and the students so interesting and interested, that it woke me from my somewhat jaded stupor. The fashion machine that we witness here season after season and the barrage of information catapulting our senses has a dulling effect (on me, anyway). It takes a physical remove to realize that so much of what we see, do, think, consume and aspire to is the too in too much. That isn't to say that Qatar is like a remote outpost on the edge of the Arabian gulf or a hinterland with nothing but sand and roaming herds of camels. Believe me it wasn't. It is a tough thing to describe, a strange mirage in the midst of a vast and arid desert. As one of the Arab Emirates it is oil rich. That's actually an understatement. It is crazy rich with almost every single square meter in a state of construction, irrigation or drilling. But unlike Dubai that is leveraged and buckling under the weight of debt, kind of like us poor slobs over here, the Al-Thani royal family has the desire to create a world for the Qatari awash in art, culture, the most mind boggling architecture and 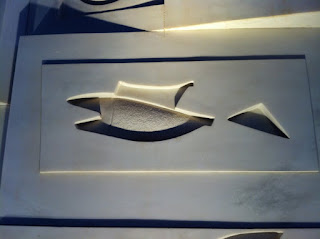 state of the art education. With natural reserves of oil and gas under those sand dunes to last a good 400 years before waning they are well set for the foreseeable future.

Having never been to the Middle East, I really had little to go on other than what I read in the press or see in films or on the television. Sex and the City 2 was of little help. I was relieved not to see SJParker and co. slogging through the desert in heels while dragging douche bags, I mean IT bags. That's not to say that the capital city of Doha where all the action is is subtle and without artifice. It was rife with expensive toys, obviously wealthy Qataris and expats. The cars were only the best on the luxe car market. Jewels, fine watches and yes, the luxury goods that dangle from the arms, wrists, ears and necks of the wealthy are there in large numbers but thanks to veils and abayas (robes) you don't see it staring you down like a stroll down Madison Avenue. Mystery was a component of everyday life that kept things interesting. I'm a visual person and am endlessly fascinated by what goes on around me. I wasn't blind to the darkness in the corners of the blazing sunlight. The place was blisteringly hot and everywhere I looked I saw men working in construction, planting trees, watering sod for miles and all of them looked to be Indian, Filipino and other races that were more 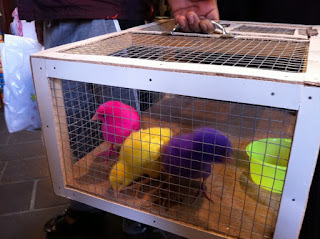 difficult to identify. As an honored guest my experience was obviously different from that of those who labor in the shadeless sunshine.

Still, I had a fascinating time and met some very special people. Too many things happened over that week to describe here, so I'll dole it out a bit at a time. It's great to be back despite the cold shower effect of a blizzard and a city almost brought to its knees months ahead of schedule. Its shocking to go from booty shorts and a tube top to a down jacket and snow shoes in under 24 hours. But this pussy cat is a fast change artist when nature comes screaming down the pike. I'll be back with more a little later. Inshallah! (definition: God willing)
Posted by Fluff Chance at 10:54 AM

Tell me you did *not* wear booty shorts and a tube top in Qatar.

Christa,
In answer to your question: no, I did not wear booty shorts and a tube top. It was too f&*#%g hot for that. I sufficed with a thong and sunscreen until I had to abandon said thong and made do with just the sunscreen!
Love,
Puss cat

again for your insights, illuminating our minds.
I've dreamed of traveling the globe.
Now that I'm reaching retirement age, I know that I will work until my days are numbered...
I'm loving every opportunity.
I've been in the last 30+ years in NYC, I see no reason to share globally as you are doing...

I'm so glad to have found you again and haven't you been very productive lately? Thank you for writing wonderful things about VCU (I graduated from VCU with a degree in French and International Relations) So proud to hear that they continue to break new ground which you are certainly no stranger to doing. Continue on!