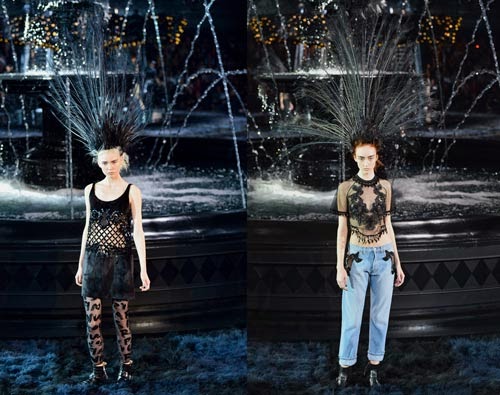 It's with mixed feelings that I view Marc's departure from Louis Vuitton. The collection shown a couple of days ago strikes me more as an homage to his tenure there, the incredible shows he staged, the creation of a luxury clothing business where there was none before his arrival, the buzz he created in a city of staid fashion houses no matter their appearance to the outside world and the incredible success that Louis Vuitton and the LVMH Group enjoyed from his labors. 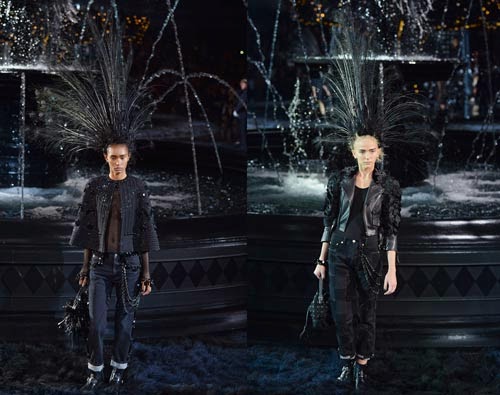 I was never a big fan of the work as it struck me as uneven, sensational, too often mired in its own self-consciousness. Still there were moments, recently, where the work resonated with wit even brilliance. The sets and production values too often over shadowed the clothes but that was ok when the clothes benefited from that overshadowing. The fact that some of his most memorable sets were present for this final defile' helped to underscore just how incredible a mark he made. 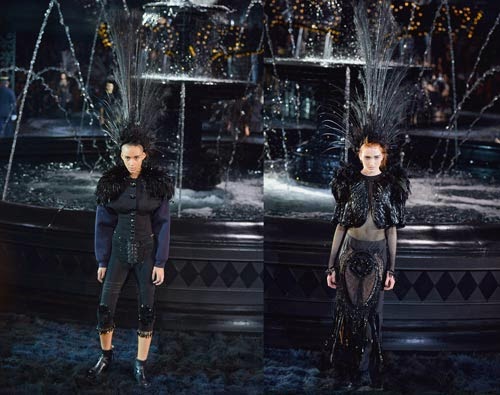 This last collection is hard to judge as it feels more like a statement than something for the selling floor. Sure there were beautiful dresses in the beginning with beaded lace inserts. The chiffon tops sparingly scattered with jet crystals artfully covering breasts and baring all else over jeans with fantastical headdresses by Stephen Jones were dramatic but more costumes than clothing. The jackets with a profusion of embroideries will certainly become collector's items and treasured forever. The total blackout of the sets, the clothes and the environment was hauntingly beautiful and in some ways more dramatic than the productions of the recent past. They added a gravity to the proceedings that was a class act from start to finish. 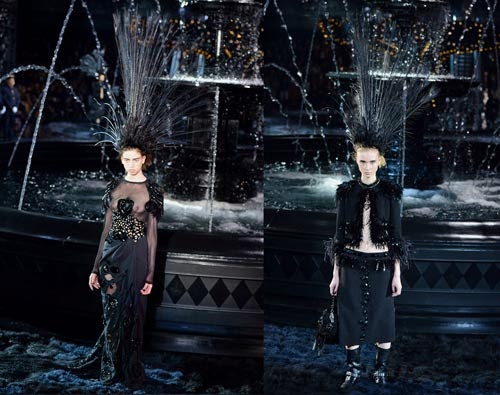 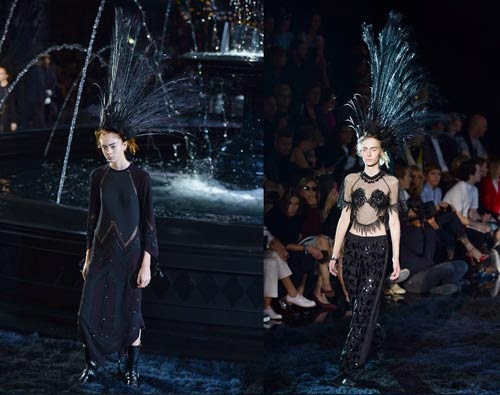 It can't be denied that Marc Jacobs succeeded as an American in Paris more profoundly and for much longer than any who came before. If you remember Michael Kors at Celine and Oscar de la Renta at Balmain, neither of them lasted for more than a few years each. Their presence there was exciting and successful but didn't extend long enough to leave a footprint. Perhaps, that is due to the fact that they were burdened with existing collections loaded with baggage that at the end of the day were too cumbersome to overcome. Marc's unique advantage was that there was no collection other than hand bags and luggage leaving him free rein to create the fashion from scratch. 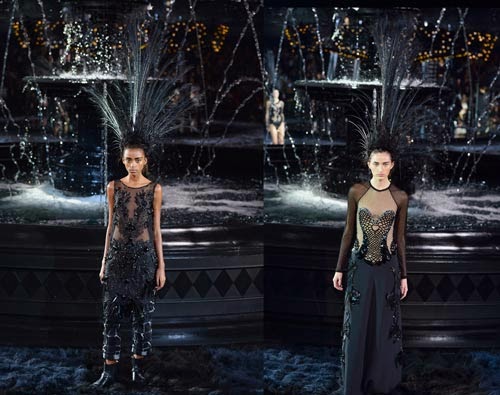 The most success of his 16 years were the revitalization of the handbags which have become ubiquitous the world over. There isn't one subway car in NYC that isn't stocked with at least 10 versions on any given day. So too are the streets of NYC, Paris, Milan, China and Japan, not to mention Peoria, Kansas City, Jersey City, Tulsa and beyond that are jammed with Louis Vuitton bags of every shape and size. That's the true success story. I've rarely seen the clothes on the street, only in magazines. Nevertheless, his footprint is large and his international name recognition and stature is the stuff of a fashion fairytale. 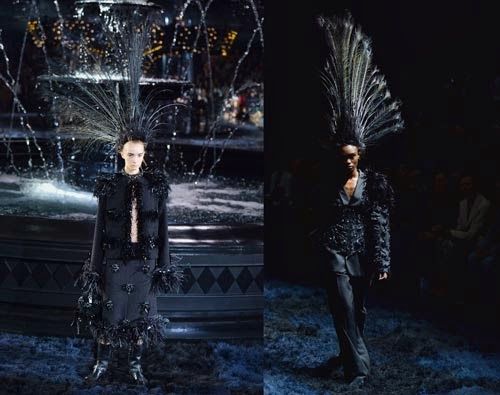 I'm reminded of a Marc Jacobs show many years back where he bowed/knelt before Anna Wintour at the end of the runway asking, "Did I do alright?" Her benediction and act of almost knighthood surely helped pave the way. That fawning obsequiousness had a lot to do with his trajectory certainly. His adoption by Anna along with that of Proenza Schouler, among others, has been the guarantee of a future both bright and lucrative. That doesn't cancel his obvious hard work and singular focus despite the schizophrenia of the work from season to season. Some say he captured the zeitgeist and wrestled it into big bucks and big trends. A mind reader and a great designer are not necessarily the same thing. His gifts in my eyes were more as an idiot savant with a styling wand. Only last fall with his Marc Jacobs and Louis Vuitton collections with all their graphic bombast and beauty did I start to warm to his design vision. Hopefully, this move back to NY to focus on his own eponymous collections will bring more of the magic he's shown of late.

Marc Jacobs, like a good musician, has taken us to the bridge again and again, now it's time for him to bring it on home. 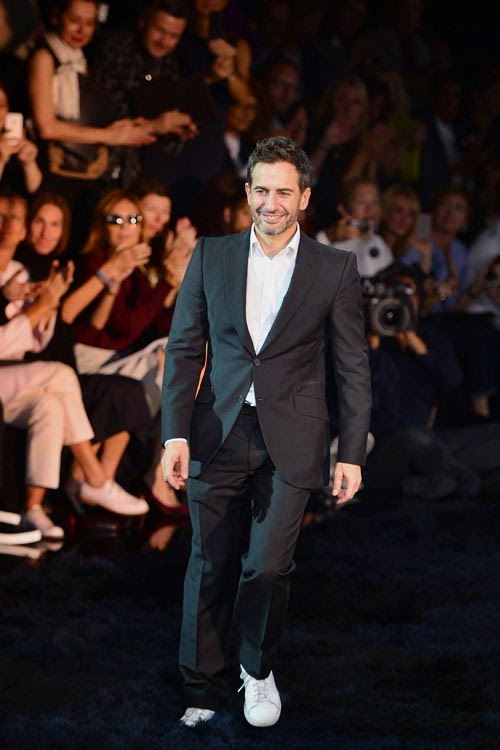 I think Marc was shortchanged in Paris. I suspect he signed on to Vuitton with his eye on Dior, Givenchy or YSL but, clearly, it was never meant to be.

That he created a fashion identity for an old luggage house is to his credit, but I've always had the sense that he was fucking with us all. The "unevenness" always struck me as a game of cat & mouse with the industry and the slavish consumer, just because he could.

Personally I think he is currently the greatest living American designer bar none. Who compares?

Let's hope this begins a new phase for his eponymous collection.

Love your reviews, as always. But I was a bit surprised by your praise of MJ!

Are you praising his tenure due to the overall financial success of the house (accessories...)? For the last several seasons, I've felt that MJs work has become more and more anti-woman, at Vuitton and *especially* at his own house. The large hats that obscure the face, the crack-head wigs of S/S 2014, and irreverent fabric choices that transform the models into emaciated pimps. SS 2013 is a recent exception, although the cut of the clothes does little to enhance the body of the average woman. Overall, I find his work somewhat misogynistic (remember the Victoria Beckham ad from 208?).. this extends to his treatment of his models, who he pays in "trade"...