Ungaro has gone through more changes than that creature from the black lagoon, Senora dello Russo. Since Emmanuel Ungaro's departure there have been a steady stream of hopefuls and the hopeless. Either the purchase of the house by the CEO Mounir Moufarrige with questionable judgement, a total absence of fashion business acumen and an even greater lack of taste. We saw the likes of Lindsay Lohan with her ineffectual governess, Estrella Archs (the actual designer forced to take a back seat to this OOC hellion), humiliatingly deputized to shadow this train wreck who new nothing of design but had intimate knowledge of the hidden rooms and private toilets throughout the Maison, where she spent most hours guzzling vodka by the bottle and snorting 8 balls just to steel herself for the steadily retreating press. This train wreck, like the Denzel Washington film "Runaway Train", had disaster writ large on every billboard from the U.S. to Paris. Still the visionary CEO of the house viewed it all as a tempest in a paper bag, a clever bait for the international press and imagined a stampede of clients dying to do the Lilo two-step. Whether Lindsay was huffing on that bag filled with hairspray, while tearfully, with a running nose attempting to answer questions by the press on her inspiration or just on what her secrets were to getting up in the morning. To that, I imagine she chirped, "Easy. I never go to sleep!" Spoken like a real (fashion) pro.

Fausto Puglisi is the latest designer to climb onto the back of this bronking Shetland pony. With his own label in Milan this young up and comer who sees himself as a couturier, feels that his Ungaro collection is a "real life celebration and not just a couture celebration." You have to admire his confidence and if the press' embrace of this contrived and ill conceived collection is any indication, his confidence is well grounded on a bed of swampland. There was nothing real life or couture to celebrate. There was nothing to celebrate at all except that one more show was done and it was onto the finish line.

Chiffon printed, draped, wildly mixed and above all, infused with sex appeal was the Ungaro story of before. Those girls ruled whether it was your cup of tea or not. More women than not chose to wear those clothes simply because they made a celebration of a woman's body and displayed expert technique in the art of shape, bias cutting and drape. A woman in an Ungaro dress looked good enough to eat. Not so in the clumsy hands of Fausto. A ruffle placed here, there and everywhere along with an unsettling number of dresses with empire waists that suggested too much tummy or an upcoming delivery did nothing for the models. I shudder to imagine a woman in a dress with the wide clumsy straps over shoulders and crossing chests, paired with black patch pockets, floating layers of garish colored chiffon capped with riffles wired to keep there shape. Get the picture? Sexy black jeans cut like skin with a single row of wired ruffles running down one leg with a patch pocketed silk blouse on top. Polka dots on chiffon with a clumsiness to the scale paired with solid contrasting colors adding up to an institutional color story for for a psych ward just doesn't float my dinghy. Perhaps the fact that Anna dello Russo has championed his work by wearing it in public gives him the self assurance that he has in fact truly made it. But, hey...whatevahs.

The press's embrace of this collection and store buyers crowing that it will do well at retail must be mainlining the Kool-Aid. This is not what fashion is about. This is what has replaced fashion. Ersatz design based on scraps of ideas gleaned while racing through life from one tired party after another. This is what I'd call S%#T on a stick. 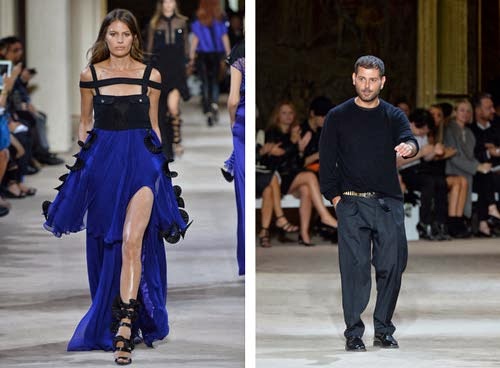 So much fun to read !

It's amazing to me how a brand can be on it's 4th or 5th designer in 6 years and expect to still have a brand identity. What's even more troubling is that, during this time, the Ungaro " DNA" is most'y based on his work from the 80's, without regards to his work for the previous 2 decades.

2 brands come to mind when I think of this mess: Pucci and Bill Blass.

How many designers ( 4 or 5?) did Pucci go through before getting the revival it's gotten with Peter Dundas? Furthermore, the press was based on an aesthetic more Bob Mackie than Pucci. Maybe it's time that Ungaro finds inspiration in Courreges or Balenciaga instead of beating the 1985 dead horse.

Otherwise, the company/brand that is Ungaro just may go the way of that other 80's institution, Bill Blass.