Wasting time doesn't pay. In fact, it can cost you dearly.One must be organized in life, it's not only a good idea, it's imperative. Organization is what keeps us all alive, self sustaining, happy and in step with our interior worlds and the greater outside. That said, I screwed up big time last week. This should only happen to a fool, so use my example as one NOT to follow. 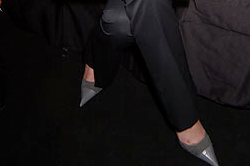 to Europe and take in the shows in Paris and Milan. There were some great parties and dinners tossed into the mix to keep one interested . Anyone knows that after 5 or 50 shows one gets a bit restless. A great party with some frighteningly jaded fashion junkies might add a spark . God knows a steady diet of models, music and Mode can create something akin to Post Show Traumatic Syndrome. I was looking forward to catching up with Andre Leon Talley, and my buddies who pack the front row. When we rub up against each other in Paris, London or Milan, there is a frisson that sends chills of fabulosity shooting through your very being. Not like here in NYC, where after so much as an air kiss you have the uncontrollable desire to take a bath. I was ready for some love, to feel not just a part the the action, but to be the action, if you know what I mean.

With this romp in mind nothing sartorial was spared. New undies, some socks and even a new shirt I could wear 10 di 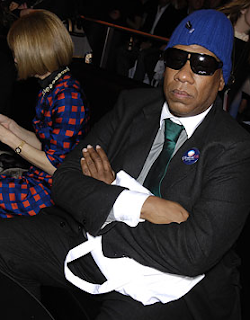 fferent ways. Jeans with a crease just for that RetroDork look. I splurged on a Goyard bag from the nicest salesman.I thought it strange he was outside selling them, but it was such a glorious autumn day so I didn't question it. That bag would carry all the goodies that so many shows would have waiting just for me! One always needs to make a statement in these heady situations, so a light bulb went off in my head . I became possessed with a clever way to capture my favorite looks on the runway as well as to shoot snaps of all my friends revelling in the mayhem of Le Mode. So I bought about 20 disposable cameras...BRILLIANT,right? You don't have to tell me, I KNOW brilliance. I live, eat, drink and choke on it. Needless to say, I had it goin' on ,and was RET TO GO!!!!! Can I have an AMEN???? Damn straight.

Packing was a breeze. Everything fit into my IKEA bag...no baggage checking for me. When that big bird touched down this one was going to be off at a full gallop. Andre told me he was absolutely living in a sweat suit and CROCS, so I figured comfort was the name of the game. Filene's Basement had some slightly discolored velour track suits and Payless had to die for multi-multi colored high tops that were just irresistible. Bought'em. I scored a clear plastic Cartier-ish tank watch and grabbed it too. Important watches are just so 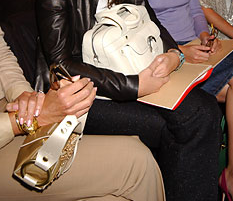 IMPORTANT. Time is a cruel mistress when travelling on the autobahn of fashion week on the continent. No way was I going to be one minute late for any and all excitement. Madness is the order of the day and night and this one is MAD ....in a fashionable way. All was ready, I even dropped by the Port of Authority to purchase my bus ticket which would ferry me right to the airport the following day.
Honestly, I have never been so prepared, so on point, so styled and smokin' as I was that day.
All that was left was to get a good nights sleep and get my hairless little tush to Newark.

Fast forward to 3 oclock the day of departure. Time to go. Last minute check on all necessities:
money (65.00 seemed more than enough) with the euro so low a buck was the definition of loaded,right? Slippers for the ride over and back, a pashmina-ish wrap to cozy up with and eye mask to help me sleep. My fleece lined Members Only jacket in LOOK AT ME yellow would work in any weather and some shades. One must never be caught without sunglasses. Even if you're wearing them in the pitch black night and step in front of an oncoming 18 wheeler, you'll at least go down in style. Isn't that what we live and die for? The last little thing on my check list was my passport in it's bright Hermes-ish orange leatherette case. 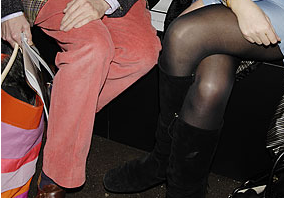 I get to the airport with my handy Ikea blue bag and cut in line for security. When one is headed to the Collections on the continent,one doesn't stand in line.One goes to the head of the line. In my outfit and my 'go to hell' attitude it was easy. The seas just parted. This lovely woman of foreign extraction asked for my boarding pass and passport. One doesn't look at these functionaries , one looks over them and focuses on the bar that can be seen in the near distance.
She took a long time to read the information in her hand which only annoyed me no end. Why do these people work in jobs where they need to but can't read english? Next thing I knew she said in broken english "Step out of line mister. Passport expired". I snapped my head back and down and said"WHAT?". She replied" You hear me mister, passport expire, no trip".

I could have sworn I heard her giggle. The people in line, the ones I cut in front of ,were laughing LOUDLY. Seems the story got around like a bad disease. I have forgotten the point of this heart breaking experience...... oh, procrastinations' payback. If only I'd renewed that damn passport when it was time (5 years prior) I would have been having the time of my life. But I didn't and I'm not. That $65.00 got me as far as the Manhattan bridge leaving me to walk the last hour home. You may wonder why I didn't just get back on the bus. Fabulosity doesn't exit an airport by bus. Only a cab will do, even if you don't have the money. Appearances are everything, I thought. They're not.

Pride broke the bank and procrastination made me mad,and not in a fashionable way.
Posted by Fluff Chance at 9:41 AM