Every season has an unfortunate cluster of misled, misguided and mistaken characters parading as designers. Let's call them the Have Nots. Actually, they are some of the most amusing ones to witness. You actually get to watch a car wreck where no one really gets hurt, they just walk away stunned and stupefied.

One major HaveNot this season, a new entry would have to be Victoria Beckham, aka

Pepper Spray or Pish Posh or something along those lines. This unfortunate creature got it into her pin head that she was, therefore she is...a DESIGNER. Someone should toss a bucket of cold water over her and pray that it brings her to her senses. I think a fire hose is more in order. I saw the stills taken in a very smart hotel suite on a singularly common looking model. Needless to say it didn't do much to help the "Collection" . Not that 12 pieces doesn't constitute a collection, but to use that term for those sad dresses is already giving her way more credit than they deserve.
It was a riff on a shred of an idea. Try as I might, I'm still not clear on what that idea was, except that everything was short in a very long way. The hems hit about 4 inches or so below the knee. A NEW LENGTH.but the dresses were all the same with very slight variation. Strapless or sleeveless. MATRONLY and decidedly un sexy. Not something she would wear with the exception of one black bustier she decided to wear at 10 a.m. to a show with J.Lo in tow. What is it these over exposed performers think that gives them the license to assume the mantle of CREATEUR? Their money? fame? doctored beauty? I think it's just plain greed. They figure that because they can buy all the fashion they want, then they can create it too. Even if it means knocking off,BADLY, the things they like best in their over stuffed closets. Let's hope she sticks to the photo op and leave the real design business to those who can.

Imitation of Life or Desecration of Christ, whatever, that hodgepo 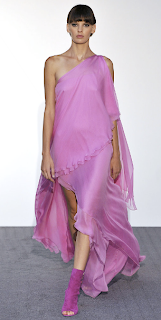 dge of Salvation Army drek that Tara Subkoff pawned off on all the stores and press, AND THEY ACTUALLY BOUGHT IT, has thankfully been given a decent burial. Enough said. (No show/no Pic)

Let's not forget Halston , the 'exhumation of the archive' collection. It's easy to make pretty clothes when you dig up the original patterns and colors of a designer who passed on many many years ago. Go ahead, kill the messenger, Zannini, and resuscitate dead bodies and call it fresh. That is the closest thing to necrophilia I've seen in fashion since Halston tried to make a go of it with the previous 5 designers they blew through. I think I covered that corpse in cashmere!

be choosy in this post because there are so many perps and so little space to give them all their due. I'll have to make the tough executive decision and go with one last one. That would have to be Scott Sternberg and his Boy by Band of Outsiders. That's a long name to remember but the clothes (left) themselves are very easy to forget. This is what I call a concept collection, or more precisely, a NO Concept collection.Most of the pieces are all very basic, tired even,and all with the look of having been store bought the night before the SHOOT. Price tags and labels were hopefully ripped out and the new label glue gunned on and then all presented on a REAL celebrity. The whole collection was shot on Kirsten Dunst, hence instant Fabulosity!!!! Home run! She's style challenged without her stylist and these clothes are an imitation of style so it all went together rather nicely. NOT...as in HAVE.

So there it is, from my biased opinion. I don't like being played and these collections make fools of themselves and us for having to seriously consider them. So back to my book and let's hope what's left to chew on has a bit more flavor and texture.
Posted by Fluff Chance at 10:30 PM