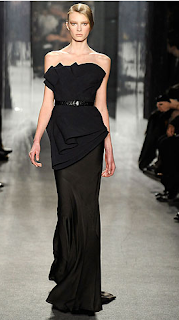 Donna Karan is for real. A beautiful collection of fantastic , creative and for the most part , original clothes. Her work makes you stop, look and yearn. Great color, color combinations and draping that makes you want to fill your closet with everything she's giving you.Jersey is the fabric of forever . With her palette, I've never seen a neutral I didn't fall in love with. Past collections have tried too hard , but this season she got down to the essential statement: dress for yourself, combine what you will and go out and face the music.So much that has been shown this week is so forced and immature in comparison. Her collection was a tour de force.

Marc Jacobs (at right)is at best a poser at worst a lazy one. There were one or 2 pieces that I liked in his show , but overall it was a let them eat cake moment. Too bright, too obviously designed by multiple committees and too slow out of the gate. It all references his references. Marc looks as though he'd rather be adored personally in that man-tan Tom Ford sort of way than actually work. His love of his own press is all too obvi

ous. Still some nice clothes, styling that was really the secret and grand in scale. That for me is not enough.

Rodarte(at left) is a bit beyond me. Everyone sees this collection as so directional and important. I think they should stop trying so hard. The boots rocked, the venue was fantastic, but the collaged everything is so studied and not new. I see this sort of work in senior design shows at fashion colleges too many times. Granted they do it best, but that's what I think of every time I look at their work. Interesting distressed leather and mixes of rich skins and textures, but not clothes I want to see in real life or on the runway.

Michael Kors is perhaps repellent on Project Runway but his collections are never a disappointment. His work is urbane, clever, chic and always right on time. There is a maturity, a mastery of technique and an imagination that whips it into a delicious meal. It's a feast of riches but always presented in a way that makes one want to possess his clothes. I'm always struck by how right it looks as opposed to Marc Jacobs . He's what Isaac Mizrahi wishes to be. Of this moment, referencing the culture of the past and laying down new roads for the future. The colors, fabrics ,styling , all the pieces fir in his deceptively simple puzzle.

It was a highpoint in this plodding week.

Oscar de la Renta,(at left) once one of my favorite collections is looking it's age , of late. He has consummate taste but no new ideas. The same signature drape from the shoulder or at the base of the neck turns up again and again nor for 3 seasons. I don't understand it. He tries the old odd ball mix and match and it looks like a stylist desecrated "costumes" for the salke of some "shake it up" styling. Then there were the animal prints done without much imagination. The suits were staid, colors classic and the ball gowns heinous. It's going to be tough for Eliza Reed Bolen to find something to wear in this batch. I am disappointed be cause he is a classicist who has consistently found a fresh vocabulary to express an ongoing poem, year after year. This season he appears to be tongue tied. I include this picture, because I couldn't find another that wasn't boring or repetitive, or not chic.

laurels. He is the modernist, along with Francisco Costa and Isabel Toledo, but he's the coolest. This season was uninspired with a few exceptions. Those exceptions( I've included the most glaring one) are interesting because they appear to be expressions of humor, but with a sure hand and a real beauty. It looks like the studied mathematical spareness of the body of the collection gave him a bit of a headache, so he had some fun. Graphic , bold eye catching fun. And I LOVED IT!. Would love to put it on a mannequin and display it as art. He is a sharpshooter like some others mentioned this morning and thank God we have these talents to look forward to in a sea of bottom feeding carp.

There are others to be considered, but for the moment , it's time to go out and enjoy some fressh air and clear my head. Have a great day all and remember," It's only a dress".
Posted by Fluff Chance at 7:58 AM

Fluff, i love the way you it- so true!
Karan and Kors, are so pleasantly unexpected, Rodarte is trying to be Balenciaga circa Fall'02, MJ is... i don't have any words for it.
xoxo
r

I agree about the Rodarte boots, especially the light taupe wrapped boots which I would order now, even though they are a tad high up the leg for reality. As for their dresses, I didn't care for the cut, especially shoulders, but I would love to have some of the fabrics to play with. They remind me of these scrappy ironed felt and "found materials" pieces with wonderful puctuated translucence that are hanging up at my niece's pre-school. Well, they look great at the pre-school!

Michael Kors' collection is my favorite so far, though it may fall behind some of the menswear pieces by various designers that I have liked more than any of the women's clothes.

Donna Karan: I wish she had lightened up on the hosiery, but on second look I like several of the pieces, especially the skirts. I usually find one dayware outfit of hers to buy every season, but this may be the first time I turn to her for evening: a couple of lovely dresses there.

I thought the patterned leggings at Narciso Rodriguez were fabulous; compare to the icky, cheap-looking DVF ones.

Thank you, FC, for your reviews. You and the NY Times are the best fashion school!

you are so good with words!!!