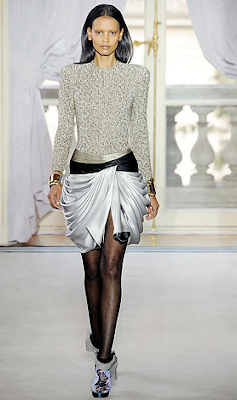 Balenciaga.....Ghesqierre's collection in so many ways was an homage to Yves Saint Laurent . The liquid draping of skirts, dress, jackets , you name it ...they had such a strong feeling of YSL. You could say Ungaro was being channelled . I don't want to take the credit away from Balenciaga , though. That would be a disservice. Nicholas was clearly evident, but the shift was very apparent. The tailoring was there like last season just much softer. The shoulder went from peaked and rounded to more an Armaniesque slightly extended and round one. One look which appeared to be tweed , but was infact tiny caviar beads to create the texture and look of tweed with a draped crepe satin skirt, was a hybrid of both YSL paired with Armani. It was very beautiful. So many looks were very beautiful. Beautiful is not an adjective that I associate with Balenciaga lately. There is something romantic that has infiltrated this house. Perhaps Nicholas has fallen in love with someone other than his own reflection. Maybe, He wants to appeal to more women. Maybe he has gotten a little tired of the hard edge and is going another way. Whatever his motivation, it feels and looks right.
Louis Vuitton/ Marc Jacobs: He just doesn't do it for me. Not in New York, not in Paris. There is such a randomness to his work. I liken it to taking a big bowl of many types of well cooked pasta,tossing it against a wall and seeing what sticks. The editors treat him like a darling and it begins to look more and more like he plays to them and not the audience.....but I think the audience is mostly editors, so there you have it. Some pretty clothes, but there's no story there. It's a styling job for the magazines and the groupies who swear by him. I will say that what comes out of the LV workrooms is superior to his eponymous collections , but it is a similar message/look just with richer fabrics and a fatter checkbook supporting it.His collection had the feeling at times of early Lacroix Light. It was a nudge to ask women to drink and be merry...fiddle as Rome burns because in time this present day crisis too shall pass. With this in mind there were lots of bright colors and patterns, poufs, frou frou, all sorts of sweets to amuse and delight, but not relevant in the end.
Chanel/Karl Lagerfeld: Either way you slice it, he is the man. I've come to see that in a strange way Chanel is a rather static collection. The directions it takes each season may differ but the message is the same : Chic, modernity based on a romantic theme with an underlying melody that's composed of variations of a variation on the theme. It's all so masterfully interwoven that we think we're hearing a new composition when in fact it is a passage that has been revised, developed, altered , played in a different key but resolving itself back to it's original melody. This time it was a very Edwardian/ Beau Brummell riff. Lots of black and white coats, coat dresses, skirt suits all with layers of ruffed and rusched collars and cuffs. Cut away jacket shapes over draped empire dresses....very romantic ...very Chanel. Black and white subtly was invaded with the palest jade green until the looks were all jade with white. It felt familiar as shapes were all familiar , just tossed and paired in another way. Then pale pink invaded as the formal became more sporty and then shifted from romantic ,historical references to the sleek leather dresses of a modern woman. Suddenly bold graphic second skin body suits appeared under short puff ball jackets. On and on it went in typical Chanel fashion. In the end it was like a film you enjoyed but didn't really think about the next day or the day after. When you're asked if you saw it, you'll say yes, it was good but be hard pressed to remember the plot.
Azzedine Alaia: Fantastic. A master who hides behind nothing. No gratuitous decoration. Not one crystal any where. The models were glorious in their own beauty, enhanced by unreal shapes, seaming and beautiful fabrics and textures. A genius. This is a collection that makes one dream. It's a different way of looking at beauty. The difference between nature and artifice.
Posted by Fluff Chance at 7:34 PM

What a pleasure this is to read . . . evocative and elucidating both. If you ever give a seminar, Fluff, I'll be there with an apple . . . xx

i agree with you on azzedine alaïa. he's masterful and a true couturier. it takes a skilled person to make beauty without the flash but with skillful cutting and understanding of the women's body. he's my favorite one of the reasons why i decided to become a designer. a true individual and does not give a damn.