I just got my paws on the Isabel Toledo encyclopedia which accompanies her exhibition at The Fashion Institute of Technology. It's written by the show's curators Valerie Steele and Patricia Mears. Encyclopedia is the best way to describe this book as it covers all things Isabel and an awful lot of her collaborator and husband Ruben Toledo.
Prolific, creative , visionary, fantasist, modernist ....none of these labels really encompasses or does justice to her ability and contribution to 20th and 21st century fashion. The work, it's beauty , and it's total originality is staggering. It was actually daunting and an overload to my senses with each turn of the page. 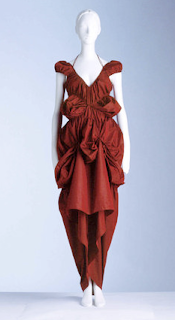 What is most mind numbing about Isabel's oeuvre is that it is almost a secret . Unless, you are very savvy and know your fashion lexicon from A to T (the rest of the letters are just redundant) you might not know that a National and International treasure lives , works and breathes among us.
There are so many examples of different methods of fabric, texture, shape and color manipulations in her vast arsenal that it's an injustice to her to try to pinpoint them. You really need to buy the damn book, get on the subway, bus, train or plane and run, don't walk to F.I.T.'s museum and see it for yourself. There is something about her eye that seems to reference the most influential movements and designers of clothing from the 18th century to the present and future.
I could see, Charles James , Geoffrey Beene, Madame Gres, Claire McCardell,Jacques Fath, Dior,and the dressmakers to Queen Elizabeth the 1st in aspects of different garments. But though I was reminded in the tiniest ways of these masters from before, they had been merely twinkles in her incredibly personal and original eye. These creations are 100% Isabel Toledo. Her history of design is a PHD program for anyone who wants to take on this sacred craft.
At moments it was 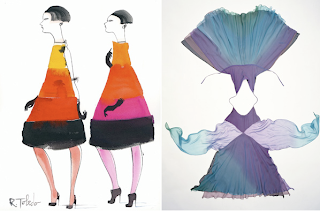 so beautiful and special, so deceptively simple that I felt like a rank beginner, even after 20 plus years working as a designer. My collection of books on fashion, design, and designers is pretty big and comprehensive. They range from the most obscure to the most influential, but this book is my most precious one of all.
Isabel Toledo is a National Treasure. We have in this city and in this country one of the most gifted and directional designers this world possesses. Isabel and Ruben Toledo deserve the respect and all of the honors that this Industry and the public can bestow. Anything short of that is unacceptable. The CFDA could hand at least 3 awards to her alone and it would honor just a fraction of her contribution.
Posted by Fluff Chance at 5:50 PM

What a wonderful post! The book sounds indispensable to anyone who is remotely interested in fashion. Oh how I wish I could take a trip to see the exhibit. Thank you for the review!

I've always followed her work and I can truly say that she has also continued on regardless as to whether she had a following or not. She continued to do what she loved, create beautiful clothes. She and her husband are my favorites because those two are an artistic creative force. Why do we in this country continue to ignore our best and brightest in favor of mediocrity or what‘s popular?

I am running to see the exhibit tomorrow...!!!

Oh why do I live on the wrong coast? I love the Toledos. At the risk of sounding trite, I am especially enamored of them because they are Latinos. As a Latina, I am proud of their success in fashion and art. We don't have many contemporaries that can compare to their vision and craft.

I just got wind of your blog through a NYTimes online article. I'm starting to work through your back catalogue of entries - especially your reviews on the AW09 shows and the CFDA nominations from March 09. I so admire your wit, wisdom and confident style of writing. I love to write as well, and kept a fashion blog for about a year, but I felt I did not have enough experience to speak with real authority on the subjects that I had such strong opinions on. You have the years and the weight behind you, and I thank you from the bottom of my heart for telling it like it is in this industry. I am only 25, but I have been 'put through the ringer' whilst trying to gain some ground as a womenswear designer. And now the recession. Hiring freezes, creative directors going for assistant roles, no risks being taken on new additions to design teams, and barely any growth. What is a girl to do? It's a jungle out there at the best of times, and now it's like a crazy future dystopia from a Ballard novel come-to-life!
I am currently stuck on a knife edge - balancing between becoming a complete whore to the press/pr/political side of things, whilst trying to stay true to my creative ideals and keep my design aesthetic alive and kicking.
Same old struggles! Reading blogs like yours help to keep one's spirits up no-end. There is someone out there who shares my opinions! Not everyone is in denial!

You have summed up exactly what I feel about Ms Toledo's work - All I could do is stand there in awe!

I found this to be the most impressive and comprehensive fashion exhibit I've ever seen in my 23 years in the industry. This includes anything shown at the Costume Institute at The Met. There are so many facets to mention: the inventive use of fabric (ie. humble twill as an evening jacket?!), the singular seems, the PATTERNS!, the illustrations... The simplicity of her patterns juxtaposed with the garments themselves made me want to cry!!!

Greetings Fluff!
I have not purchased the book, but I did visit the museum last week expressly to see the Toledo exhibit. And it was absolutely breathtaking. Words really cannot express the breadth of Ms. Toledo's talent. In fact, I wrote about both of you in my blog http://iamfabulous-ablackfashiondudesodyssey.blogspot.com/2009/07/what-if.html. I invite you to check it out. I've also added your link to my blogroll and I hope you will do the same for me. Please continue your sharp analysis of the fashion industry. A fashion newbie like me needs the wisdom which you impart.
Peace & Fashion!

You have described so well Isabel Toledo's talent and contributions to fashion! It's a bit jarring to see her have her moment now, when she has been designing spectacularly for years. I've been searching stores for her clothes for a while and couldn't find her line until the First Lady wore her fantastic ensemble for Inauguration Day - I soon saw her line at Barneys last season:) Anne Klein should have stuck it out with Isabel Toledo - that brief collection was fresh and interesting.

OMG...this is my first post ever and i'm so happy tht its abt Isabel Toledo...she is really only one of the very few designers in existence tht i would call innovative and original...she is absolutely amazing. I think JNY was so stupid to let her go from Anne Klein...how could you ever let go of talent like tht?

Lovely post! I'm always so excited when I find a fellow NYC designer blogging. The museum at FIT has fantastic exhibits and is often underrated. Thanks!


Your comment isn't trite at all. Their being Cuban should be a tremendous source of pride. As a fellow Latina, I'm thrilled that along with Narciso Rodriguez, another innovative Cuban designer, the Toledos are leading the charge in redefining American fashion. They've achieved their success without a ton of press and have struggled through hard times.

What I particularly love about Isabel Toledo is that she is a seamstress first and foremost and is unashamed to admit this. Sewing and construction matter to her; she knows how to make clothes. Too many designers cannot be bothered to learn the craft. A great New Yorker profile discusses her internship at the Costume Institute repairing dresses by Vionnet and Madame Gres, an experience that greatly informs her designs. The old system emphasized apprenticeships, learning under masters until you were ready to go off on your own as Balenciaga and Saint Laurent did. Alexander McQueen paid his dues by apprenticing at Savile Row, which you can see in his immaculate tailoring. Young designers today often don't value paying their dues.