Popped in on Stella's POP-UP in EHampton's Springs 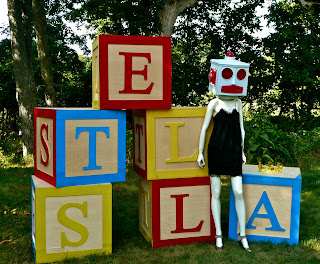 These garish neon pink flyers were all over town this week trumpeting the news: Stella McCartney was setting up a Pop-Up shop at a gallery in the deepest, most remote region of East Hamptons , known as The Springs. It's claim to fame is that it is the last unspoiled part of town,where there's still beautiful land ,woods , the bay and a large working class population. It's where we live and love the fact it's still quiet and un-spoiled. Springs is also home to the Jackson Pollock/Lee Krasner house and study center. People make regular pilgrimages there to see the house, left as it was when they livedand worked there. The Springs is considered the blue-collar hamlet of town unlike our rich relations 10 minutes away in the "Village".
So why Stella decided to open her shop way out here in the middle of nowhere is beyond me? It must be the maverick in her. There's something so Indie about her. It certainly shows in much of the clothes that hung so charmingly and unassumingly on simple racks , 2 by 2 by 2 by 2.....
The venue was the Fireplace Project, a two level cinder blocked structure filled with sculptures and odd card board cut out constructions. Some or all of the Art went right past me as did most , but not all, of the clothes. The theme was decidedly Kiddie Art. The joys of naive, grossly over-priced pieces resembling Pinatas and decorated hulla hoops dovetailed masterfully with the odd assortment of clothes, I mean "Collection". It was billed as a trunk show, so everything was full price. 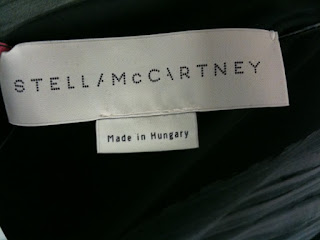 I spoke with what appeared to be a Sales Associate and asked how it had gone. The local General Store was madly setting up for a party and there was 1 hour to go for the official closing. She informed me that a party was about to start to celebrate the launch of the new sunglasses collection. I congratulated her and was immediately told that is was a private and invitation only soiree, so I should move along as they had much to do. I can take a hint, so I slowed my pace and started inspecting clothes more casually than before. I brazenly started taking pictures as well.
I went back over to the Sales Associate, and pumped her for more info. Was this merchandise from the store in the city? Had they sold well? What a great thing that proceeds were being donated to The Pollock/Krasner House(very Springs PC), and how did they decide what was best for a Pop-Up in the nether regions of the Springs.
She said they basically emptied the store and brought out 2 of just about everything . I came on the last day of a 4 day run. I saw a few very cute printed and solid silk tops. Lots of skin tight Disco pants and cheesy sequined 70's tunic/t-shirts,some perforated pleather leggings/and thigh high boots in the same perforated pleather. There were 2 or 3 inspired dresses. The Chantilly lace and crepe gowns were made 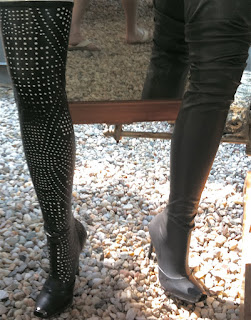 VERY poorly, as were a number of jackets and dresses. The quality of fabrics were also surprisingly unpleasant to the touch and constructed by assembly line hands. Half the labels said made in Italy and a lot of the rest said made in Hungary. There was a very mish mash feeling to the"Line". It felt like lots of Stuff, not like a collection. Whole groups were completely independent of the groups hanging next to them.
I couldn't help but think that The Gucci Group owned this company. Tons of money supports it and yet it looks like something made by a high volume factory out of China or Peru. Cheap wool that didn't even approach cashmere and more synthetics than natural fibers. The evening clothes were the most telling. The lace and crepe short cocktails and long gowns were constructed by hands who clearly were out of their depth. If I'd done it like that , they'd have been rejected in receiving even if they'd gotten past Quality Control. A strapless short dress(this is my BIG BONE of contention)was completely and utterly devoid of any construction for the bodice. No cor 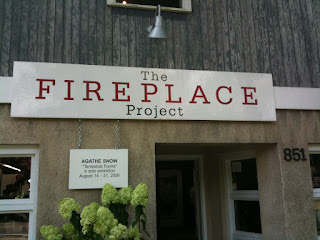 set, foundation ,not one single bone was there for support. For a cool $2000. you should get a dress that doesn't require Krazy Glue to stay up. If I know this stuff, why doesn't a company like that know it?
If they brought 2 of each thing and on every rack I saw 98% of twosies crammed together and it was the last day, I would conclude that this was a vanity Pop-Up. This was PR at it's most lame that didn't please the gallery owner who was nice enough to share,"....whatever, it's the last day."
It was a gallant attempt, just ill timed and poorly placed. Perhaps the Americana Mall parking lot in Manhassett would have been more appropriate. I came, I saw, I left.
*click on the top pic, The Emperor was there.......
Posted by Fluff Chance at 9:30 AM

Fluff, I really appreciate your review of the Stella "collection", especially the comments on the clothing construction. But isn't it owned by Gucci? To my untrained eye, I've had a tough time reconciling that the same umbrella company that makes the superb Bottega Veneta collection (if I'm right about the ownership) also makes Stella (and a lot of Gucci, for that matter).

I've been positively inclined toward Stella McCartney for trying the vegetarian line of shoes and bags, though the materials seem way too fragile to justify the price. But anytime I've bought clothing I've regretted it because of the fabric quality. So, thanks!

thanks Anonymous one!
I appreciate your correction. I hate getting important facts wrong.
Sincerely,
Fluff

I'm always underwhelmed by McCartney's clothes. I respect her vegan lifestyle & whatnot, but I don't understand why she then makes the choice to fake leather. It never looks good. I've had one McCartney item (a gift, as it happens) -- a blouse that is beautiful on the hanger and impossible to wear. I just walk right past her stuff in stores now.

I've attended my share of NY fashion shows (in standing room, of course) and can say without a doubt it has become a total circus full of hangers-on. Last season was the worst I had seen in a while- people were literally clamoring at the tents, and there was a distinct scent of desperation in the air. I doubt that half of the people attending any given show are potential buyers of fashion; they are just there because at that moment, it's the place to be.

I hope that the hits the industry has taken and is taking, will convince designers to stop paying celebrities to decorate their front rows- they don't even pay for the clothes anyway.

There's something grotesque about placing a store full of poorly made very expensive clothes in the last place on Long Island where working class people live. As if to say, even here you can't escape the crass vapid materialism which has taken over every other corner of it! Also, as far as Stella McCartney goes there's just one word of importance: McCartney.
-anjo

Anjo,I've got one word to add to that :WORD.

The issue I've always had with Stella is exemplified by her use of pleather. Pleather will remain in the land fills for an eternity, it's a petroleum based non-renewable resourse.

To me that's a more unforgiveable sin than using natural fibers, no matter what your beliefs.