There's a well in the fairy land of Fashion. It lies in a enchanted dell whose entrance is guarded by trolls and hags. Granted, with the right password the lucky are given admittance. Without that riddle of a password, the unfortunates are barred. The number of pilgrims increases each season in direct relation to the guards , who are now legion. Not everyone gets a ticket to imbibe.

Two who obviously drew from the well, must have done so simultaneously: Oscar de la Cha Cha and Thomas Maier of BottegaVeneta. All I can deduce is that one dra

nk from a 2-fisted

beer stein and the other from an etched crystal, Georgian water goblet. Who do you think sipped and who drank heartily? The collections answer the question. The taste and purity of that well water is evident in both, simply because one collection almost mirrors the other. Not everything is similar, but the guts of the collections are simil

ar in silhouette and treatment. What separates them is a freedom

of expression in one and an uptight, self consciousness in the other.

Some would say that age plays a part in this. One designer being younger and the other more senior. That's too easy when you put them to the Lagerfeld test. He is categorically considered senior in terms of age. Creatively, he is clearly not trapped by that label. So, with the leadership of Alex Bolen ,CEO son in law and his charming Junior League wife,Eliza Reed Bolen, Oscar's step daughter, age is something that need not apply. They are the fresh blood coursing through the veins of Chez de la Cha Cha.

that looked decidedly organic, not

fussy, were evident in both collections . I will illustrate this by placing each example side by side to prove my point. Oscar consistently uses a hand that constricts the shape, whereas, Thomas lets the same idea breathe. Ultimately, the consumer decides what works best for her. It's only interesting to me that one collection exudes ease, the cool factor and modernity and the other is matronly and devoid of cool. It's unfortunate in that fashion needs to be about NOW. It must inspire, seduce and weave dreams. Perhaps the fault of one and the success of the other lies in the styling of the collection.

Styling for the runway is as essential as it is for the editorial page of a magazine. Without the right mix and the imagination of a visionary stylist, the clothes are too often earth bound. In seasons past, and we can go all the way back to when Oscar designed Balmain Haute Cout 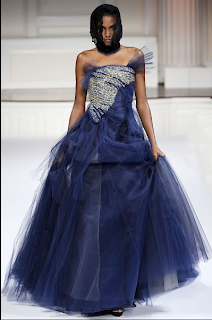 ure, his stylist of choice was Andre Leon Talley. I remember collections over 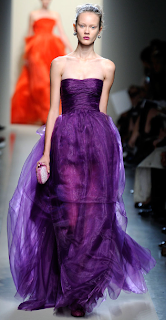 the past 5-7 years that were some of the very best in this country and the world. Whether Oscar was your cup of tea, the collections had a cohesion that is all but lost for the last two seasons. They appear to drift left and right across a treacherous terrain.There was a symbiotic relationship between Oscar and Andre that created real fireworks on the runway. One show left me in tears, and not in that pathetic, fashion victim, breakdown sort of way. I cried because I felt I'd just seen a collection that answered all the questions and left no stone unturned. My tears were simply because I saw that there really wasn't anything I could say with my collection that would or could say it with any more clarity or artfulness. I was bummed, but I was powerfully impressed. Oscar 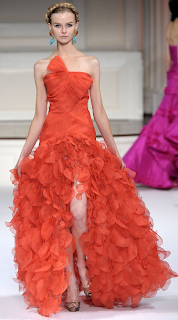 had Andre by his side and the t 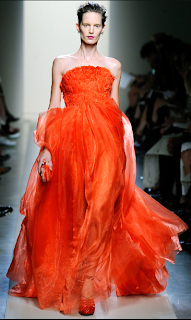 wo together were greater than Oscar alone. Now his collections are styled by Alex White of W magazine. She may be serviceable, but her youth and freshness is not adding anything to the mix. It is a collection that looks like it wants to be one thing when it's hopelessly another. WWD and W may herald that Oscar is on top of the heap, but exactly what is the nature and composition of that heap? His collaboration with Oscar was far from broken , so why did they feel compelled to fix it?

Thomas Maier wins the day and he does it quietly, elegantly and with a minimum of fuss. Whomever styles the presentation, or doesn't, Thomas is spot-on leaving us all sated. 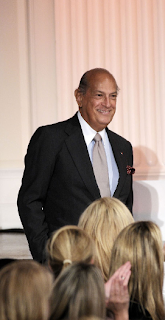 Randon Thought:
what is up with the DVF add on your blog??? I find it odd you have this on your blog. Is she afraid of you? or is she paying you nice mula ($$$)? I just find it even harder for you to comment on her and anything that she stands for, specially if she is pro and you are against it. I feel that what she should have done, was helped you out when you where in the tough situation a while back that forced you to shut down your business... I would love to hear some explanation on this... thanks!!!

Both collections have no expiration date in regards to the wearer...the woman who can wear either designer's collection spans a range of years because in my opinion the shapes are familiar but it is the individual signature that makes them "fresh".

Dear Anonymous,
The ads that appear on this blog are randomly placed by GOOGLE. They are not chosen by me, nor do they endorse, support or in any way have any direct connection to the blog or me. So there is no chance they they would influence me, my views or opinions. I am independent and intend to remain so. Thank you for raising the question so that I would have this chance to address it.
Sincerely,
Fluff Chance

thanks for answering my question. So Google has the power to place ads in your blog??? whatever they want... Now I am confused. I know of a few other bloggers and they make a little money from advertising. not that is my business, but shouldn't you be making some as well? no need to answer. But interesting enough, I don't see DVF anymore and I LOVE that. I found it very distracting... Keep going! you're up to something great with your blog!!!