The LV collection for spring is an anomaly. This collection stands for luxury, quality, craft and modernity. At least that's what it's stood for in the past. Not so much this time around. Other editors like Suzy Menkes of the Herald Tribune and even the NY Times cheered and cooed over hairy clogs and mile high Afros and really pedestrian clothes with a few exceptions. This collection felt like a repeated joke one exit after the other, much like the boorish drunk at a party who has to hit you with the punch line 5 or 10 times because he's making sure you love the joke as much as he does, or has forgotten that you've heard/seen it 20 times already.

That's harsh but so was this effort on Marc Jacobs part. The pieces that resonated, did so more due to what they referenced than for their own sake. He took a few tweedy jackets and coats, cut them like Chanel and then tacked big army fatigue green patch pockets on them just so you'd know it was Vuitton. Other looks were collage inspired treatments that reminded me of Koos van den Akker from the 70's. Most of the time it was a parade of unsophisticated shorts a 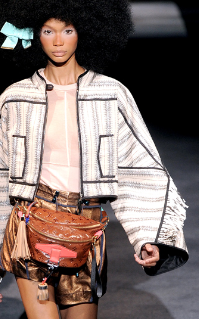 The things that did capture my eye and hold my attention were consistently the jackets. From pseudo-Chanel looks, to Carhartt -inspired outdoorsy hunting/work jackets to very artfully cut , layered ones that cut close to the waist and flared around the hips. Most were paired over knit leggings sheared off at the knees. Others were over unappealing toddler's bloomers. What

makes one think that women want to be infantilized or fetishized in panties or bloomers? Dumb question coming from someone wholly and completely out of step....but I'll stumble in the dark a little more. The other dresses I thought were intere

sting and even lovely were a pair of printed, draped chiffon minis over a base of a knit tee-shirt. They were beautifully executed if not absurdly short, but great looking. Beyond those jackets and a few skirts with huge flap pocket details down the front, I didn't see much to make my heart go bam, bam, bam.

Accessories, the mainstay of that company, were IT in the

truest sense. There was a road-kill aspect that were less than 'must have' and just dumb. Big raccoon tails dangling from over-sized duffel shapes and t

he ubiquitous yak shoes were other examples of the joke being on the consumer. There were a few clever pony skin boots that were all innocence and not even remotely arch, even with bits of hair protruding here and there.
I've said it before...when I look at his collections I feel so deeply and distressingly un-cool. This was the same feeling I experienced looking at this collection. Marc's eponymous collection usually is the lesser of the two as

far as overall impact and value. I'd have to say that it was reversed this time. There were looks in his New York presentation that were very beautiful and looked as though he was trying to express a feeling that seemed personal and actually felt. This group in contrast seems to be all surface, all show and no tell.

With all that afro-liciousness coming down the runway, maybe 55-60 looks in all, I guess it's a small consolation there were 4 models, black girls, who actually looked plausible. To my mind, that's a paltry sum coming from someone who is way cooler than me.

Perhaps his honeymoon wasn't quite long enough.
Posted by Fluff Chance at 8:44 PM

I first heard you on NPR a few weeks ago - started laughing and haven't stopped. I was in the 1969 LA production of HAIR so the models have had me on the floor with hoots and guffaws. Now I garden and raise chickens but I shall keep up with your blogs to provide a great view of a world I never really knew about! Thanks.

I couldn't agree more with your review of LV's show - it truly is like a PAINFULLY bad joke. The fact that so many critics gave it a positive review truly baffles me - I was absolutely shocked when I first saw the collection (to go from such a wonderful fall collection to this is truly incomprehensible). Nothing about this collection speak Louis Vuitton to me, and I'm glad I'm not the only one who abhors this!

Surely this is too much of a hideous disaster for even Madonna to agree to model.

The fishing creel as belly bag is QUITE an idea. Ahh, the allure of smelling like a dead trout.

Hard to believe this mishmosh -- in years past I've loved this line for its rigor. Shame.

Well...I would have to agree with you on this one! I wonder about the inspiration with the hair? Seems on first glance it was the focus of the collection, then it got old quickly.
The line didn't hold up, what's a girl to do?
You are brutally honest and brilliantly gifted in so many ways!
Bravo!!!

I have to agree with on this and on a few other collections. There was something happening in Europe this season. Truly baffling. Usually I would be writing something to defend collections, like LV, but MJ and LV has lost the plot. I find nothing he has done in the last four seasons make sense. Prada baffled me as well and I adore most everything Muccia has done for both men and women. Hannah Gibbons for Chloe truly makes me scratch my head. I see nothing in her work that could not be found in a Salvation Army. Poncho, indian like blanket? Come On. It almost makes Ungaro a success. Even Raf for Jil Sander seemed off to me and He is a genius. Gucci seem derivative of Tom Ford, but it worked because that is what Gucci is. I have to say the success of the season were Bottega Venetta, Versace, Stella, and Gareth Pugh ( who toned down his eccentric nature) to make some seriously original and wearable items. I guess I will be wearing Uniqlo +J for spring when she comes out

remind me again, why do people fawn over MJ?
I've always thought that he was overrated and that he made LV a vulgar brand.. no matter how much they charge for their stuff I wouldn't spend my hard earned money on any of it any more. sure they sell lots of units....that's the name of the game nowadays...
I guess it's like those reality TV stars.. why are they "stars"? does anyone really care what they do? why are we bombarded with them on TV and magazines? because they sell unites as well...
but deep down inside, I don't most people would want any of them over for dinner let alone as friends...
buzz supersedes substance.

I really doubt LV sells many clothes, but this collection takes the cake. Basically every look would need to be almost completely disassembled to find anything wearable.

And why? Why has it become de rigeur to put on shows that are so far from reality one feels they are on an acid trip? This season I found myself getting the most excited about the 'boring' shows, because I could see things in them that would be possible to wear.

MJ has become, in my opinion, one of the rogue tailors from The Emperor's New Clothes- throw anything out there, and the masses will rave. Everyone is too afraid of not being modern to disagree, or call it out for what it is.


You people are too conservative