My name is Precious. 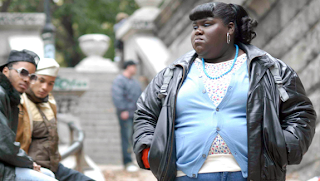 Last night I was invited to a screening of Lee Daniel's much anticipated film "Precious". I'd heard it was a big hit at Sundance and was making the rounds at a number of film festivals , but more importantly it was getting the kind of response few films receive due to it's unusual subject and extraordinary cast. Andre Leon Talley had extended the invitation and that alone was in itself not an everyday occurrence. My life is one of observation. I'm not a player, I watch the game. So accepting this invitation was stepping out of my comfort zone.

I googled the film and looked at the trailer over the weekend about 4 or 5 times, simply because it knocked the wind out of me the first time and I kept going back to see what about it had such power to stop me dead in my tracks. More than that, I found my self crying and disturbed each time I watched. The brute force of the the story was something that I couldn't shake and at the same time was afraid to watch. I didn't want to be so uncool that I'd be at a screening seated next to Andre in tears or trying to hide them. I sent him an email and warned him I might not be able to hold it together but was honored by his invitation.

We met early, by accident. I was keyed up with anticipation, knowing that he'd invited two other close friends and was worried that I would be very much out of my element. Getting to the restaurant early seemed like a chance to steel myself for an evening that filled me with second thoughts. My hesitation was that I'd be too emotional and not feel comfortable with 3 people who knew each other well. I knew him casually, but his friends, not at all. Andre was already there, so we sat down and got reacquainted after a long time. We talked about the universality of what we were about to see. The story centers on an impoverished black girl living in an abusive home with a mother that has done everything to kill her, her spirit, and the last shred of hope that flickers like a spark in a gale. I realized that this story was much larger than what happens in that squalid home but that it's about the lives of many people, all of us in one way or another. I also realized that I was afraid to lower my guard and give myself up to what I was about to see, certainly not in the company of people I barely knew and only knew as larger than life characters on a global and social stage. What would be their reactions?

One of the first things Andre said before the others arrived was don't judge people by their appearances or ones perception of them. I realized I do that alot. It's a defense mechanism and one that stems from feeling constantly that I am not good enough. Well this movie was going to turn that whole pointless way of thinking on it's head. Being open to life and experiences , new or uncomfortable is what it's all about. The safety zone is only that; safe and predictable. When Gloria von Thurn und Taxis walked in I was not prepared. I expected a return to the eighties and not a woman who has had many lives since those Go-Go years. She could have been the woman who lives next door. Her eyes said it all. She was warm, natural and crackling with energy and curiosity. But her big brown eyes were a sea of kindness. Being German was also a huge part of her charm. She listens and takes in information. She doesn't take over and control things. Like many Germans and some Europeans, Gloria has a curiosity and fascination with life, cultural differences and similarities that I found immediately engaging . We were all headed to a crash course on one pocket of culture that would raise and answer more questions than I imagined. Star Jones was Andre's other guest who joined us in time to head to the screening. She too was a very sweet and pleasant surprise. Besides being a very visible and successful Black woman in the entertainment industry, she's knowing and anything but naive. I knew when we all headed over together that this was going to be an interesting night.

The film hits like a hammer's blow. There's nothing remotely subtle in it's telling. Precious is a young woman struggling at 16 , still in Junior high school living with a mother on Welfare, a baby already a few years old , a second one on the way and both of them fathered by her father. She's the antithesis of the name Precious at 200 plus pounds with an expression of frustration, anger and fear. Without telling more of the story, because the film is the only way for one to know the story, it's about a person without love, suport, or the smallest shred of a dream to make it to a brighter tomorrow. Every force in her world is doing it's best to kill every last ounce of hope. It's a story that mirrors all of our lives in many ways: overcoming impossible odds, be they inside us or from without; wanting, deserving and needing love and respect to be able to stand alone and find a path through life no matter how fortunate or handicapped we may be. Clareese Precious Jones finds her way with the help of her teacher and welfare agent , both brilliantly played by Paula Patton and Mariah Carey (no make-up and clothes that say TJMaxx). Gabourey Sibide, the actress who is Precious is as staggering as Mo'nique, who plays her mother. Certain scenes between the two and Precious' struggle to survive and take charge of her life and those of her babies is so gut wrenching that I cried again and again along with many others.

It will open in about 2 weeks. You need to see this film. It's message is that we are all a family. We all need each other's support, acknowledgment, understanding , respect and love. Love is the one element that makes it possible for every person to survive and grow. Without that we are lost.

The reception afterwards had some of the usual suspects. Tina Brown led a panel discussion with Lee, Gabourey(Precious) and the Chancellor of schools. Instead of directing the questions to Lee Daniels and the star of the film, allowing them to share how they managed to create such an extraordinarily powerful story, Tina kept asking the School's Chancellor about NY City schools. She was less than interesting and was disappointing all around. We managed to be the first ones to take our seats and somehow, being lost in a conversation that kept breaking down different moments in the story, the last ones to leave. Not for a moment did the evening or the experience we shared slow to silence. We could have sat up all night talking. I, for one, was sad when we said our goodbyes and headed off into the night, each in a different direction.
Posted by Fluff Chance at 9:37 AM

"One of the first things Andre said before the others arrived was don't judge people by their appearances or one's perception of them."

Ms. Fluff,
Your keen interest in this heart wrenching movie/story by Sapphire is truly inspirational. I was moved by your candid response to the trailers. I know during the showing of this incredible movie and its actors that i would break down in tears. I now know it will alright to do so.

Thank you for your commentary on this film. I've had reservations about seeing the film in the theatre because I know I will be an emotional wreck.

Sad and scary that a talk show host was under the impression this was based on a true life story.

Mr. Tally's quote is so spot on!

I am looking forward to this movie. I tried reading the book years ago, and could not make past the first page because it was ebonics central. The movie trailer also had me on the edge of my seat and I'm pretty sure I'll be crying at various moments during the film.

i cannot wait to see this movie!!! i believe this movie is going to be a huge hit!!!! i wish everyone the best with this movie.

Give me a break ! Contrived "After School Special" if ever there was one. "The Color Purple" tried to use that same pathetic play upon our feelings. If anything, it proves we are biased against fat, ugly, dowmntrodden people, and can relieve our guilt by seeing crap such as this, before continuing with our selfish, biased ways in the actual world. Save your money and actually send it to worthwile causes to help such people, if indeed, your heart strings are severely tugged.

ABJoe,
Your opinion is certainly valid for you, but I wonder if you've actually seen the film before you come down on it with so much force. Unless you saw a screening of it, I have to wonder where the force of your opinion is coming from. It opens in about 2 weeks. It was anything but an afternoon tv special and certainly not The Color Purple. I value your comments but I'm not sure you're giving this film a fair shake....unless you saw it and then made a judgment call.

I Can't Wait to See The Movie..The trailers are so good..

I cry every time I see that trailer. I work with foster teens and I know they will anxiously run to the theatre to watch this, I can only imagine what personal experiences this movie will bring up for them. I look forward to this... thanks for sharing!

Empress of The Eye said...

Thanks for the insight into an evening with people you don't normally get a chance to get that much insight into.

Maybe this movie should be required viewing. I am hesitant, but anticipating seeing it myself.

i suddenly really want to see this. it sounds like the sort of film we need more of, and the kind that will not only sock you in the gut but force you to sit down and REALLY think. thanks for sharing your experience all round! reading is always a pleasure.

My mother has been counting days to see the movie.