President Obama Is the Nobel Laureate for Peace 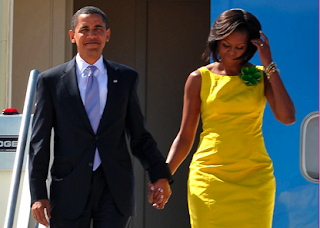 Well that certainly trumps fashion for the moment. Nothing lingerie inspired, deconstructed or even a good, old return to Yazgur's Farm can top this news. I don't really have a political hair on my hairless body, but I've become conscious due to the simple fact that we've been living in a parallel universe with little oxygen and even less common sense.

For everyone one who's supported President Obama, the belief and desire for change,for Black people, for people of color, for the many minorities and the disenfranchised; today is a wonderful day to celebrate. The Peace prize is given at times to people as an impetus to push towards a more peaceful world. I think he's been awarded because the backbone of his agenda is one of inclusion and not the doctrine of the last regime which was one of exclusion and division.
President Obama has worked tirelessly since before his Inauguration to bring us together. He's shown the similarities in all of our diverse cultures and done it in a way that have taken the whole world into account. I believe that the countries outside of the U.S. want to like and regain respect for us, respect which was diminished and all but forgotten in the last years of the Bush Administration. We went from a country to be followed and praised to one that was denigrated and despised. The Obama administration is bringing us back from the brink and making a place for us at the world table. 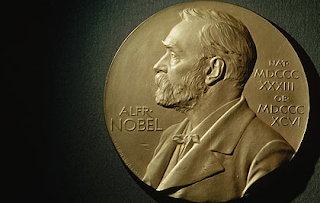 He's reached out to all corners of the world, the ambivalent nations as well as the notorious, and treated all with the same measure of respect. That desire for respect is the common denominator that every person on this planet wants and deserves. He presents a multi-ethnic face to the world of an America that is symbolic of the larger world. This simple gesture has given us all a chance and renewed desire to work towards the most important single goal: Peace. In a peaceful world anything is possible. In a world of cooperation and understanding we all have a fighting chance.
We as Americans are not the only lucky ones, so is the rest of the Planet.

Let's cross our fingers his example trickles down. And let's also cross our fingers that we can all remember he's a human being, not a mythical figure or a demigod, so that when he makes a mistake (and we all do, we human beings) we can forgive him and let him get on with his work.

A really fine, thoughtful observation, Fluff. By contrast, I'm kind of sickened by the overwhelming negative press reaction in the U.S. It takes a brave man to dramatically change the policies we endured the previous 8 years; Obama deserves this award, and I hope George W. Bush and his cronies take note.

Most of those who believe in the pratice of division and exclusion ignored the people when they were rejoicing around the world. To this very day they still don't understand what this was all about. Imperialism has destroyed this world and this world belongs to all of us and not just a few.I for one wanted to elect a man or a woman who would have the courage to meet at the table of PEACE through diplomacy. I did not want to see another individual elected who felt the need to exercise his own insecurities and hatred as a man by denigrating another man as being less than. If we want PEACE, we'll seek peace. No one benefits from war other than the greedy. As long as the people are alienated, the greedy will always benefit from it.Too bad the people are so blind from hatred that they can't even see that their being used to pushed someone else's agenda.

Well articulated Fluff. It is a great day in the face of change.
President Qbama is being the change.
We can learn much by example. We have a LEADER who happens to be a politician.

Speaking as a Democrat living in the very red state of Texas, I am thrilled to finally have a STATESMAN holding the highest office in the land, instead of an overgrown frat boy. I think the world feels the same way and this is reflected in the Peace prize being awarded to President Obama.

at the same time i just dont see him, at this point, being on the level of previous laureates such as mlk jr and mother theresa.... getting elected? seriously? its great he's not gwb, but i certainly dont see how he in any way deserves this. but then again its a handful of norwegians that pick em.

Empress of The Eye said...