This Collection, Bibhu's third shows why his following is growing and also why he was one of the blessed who were chosen by the Fashion Incubator to land a coveted studio, fully loaded with all the perks. He is a very creative new designer on the scene and deserving of all the attention that is now focused on him. After several years working along side Gilles Mendel, he has the freedom and skill to make his own music.

The day clothes, much of it sportswear consisting of fur trimmed jackets, vests and cardigans over pants and pencil skirts, were fresh with a hint of retro. The lengths of the skirts falling 2-3 inches below the knee were a proportion not many tried this season. They were elegant, elongating and sleek. The furs were really exciting. He used Fisher, one of my most favorite furs as trim for smart and intricately cut jackets, as a scarf and as a full vest. I love Fisher because it has the look of Sable without the weight of the pri

ce tag. It's very rich looking and you still have enough cash left over to buy the rest of the outfit! Who knew? He used it in a very graphic way that for all it's volume, still made the woman look 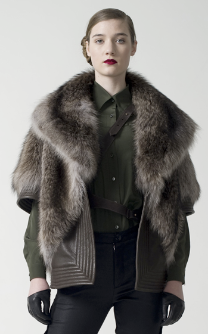 lean. Mixing it with leather for a jacket in luscious taupe or with loden in a knit double-breasted cardigan looked great.

Dresses for day, cut in grey flannel with contrasting steel satin were great examples of his affinity for architectural shapes. This same theme moved into satin cocktail dress and a gown. They are strong pieces that don't necessarily work on every body but were striking in their precision and beauty.

What moved me most were a small handful of evening gowns in silk mousseline. Draped, ruched and flowing, these pieces in non color neutrals were killer. Sup 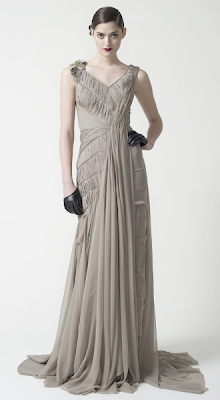 er glamorous, complicated and flawlessly cut but with an overall effect of effortlessness. Some one said that it smacked of J.Mendel, but I would strongly question that presumption. I think J. Mendel looks more like Bibhu. After working there for such a stretch, doing what assistants do which amounts to much of the heavy lifting, I'd say Mendel is riding on some of the very potent seeds Bibhu sowed during his tenure. He's a great talent and I liked this collection for its strength and focus.

Clothing for grown-ups. How refreshing

Fluff, thanks for the images which, no discredit to your prose, sometimes cannot match the visual impact of the clothes. Simple and sumptuous, a rarity, yet I can figure why.

In reading a fashion review in WSJ today, the writer notes that designers are aiming for what people might actually wear. So this explains the clean, simple lines you've been describing. The designers have been pressed into service by retailers who have been battered the last eighteen months. Actually, a bad economy might help weed out the truly talented from the crazies.

I would love to see your analysis of the Olympic men's figure skating costumes. The good, the bad and the ugly.