I just had a close encounter with the divine. That sounds overly dramatic, but that's what it was, plain and simple. Actually, there was nothing plain or simple about it. This Collection was an example of the highest level of design; effortless, inspired and masterful. There was no point in attempting to shoot it for fear of missing the details that flooded my eyes. There was a palpable rush of excitement when the very first look came down the runway.

The setting was perfection. Abstract expressionist paintings were hung

from the walls, a breathtaking sculpture stood at the end of the room with a wall of floor to ceiling mirrors casting reflections of every look and everyone in the audience. Scale is the operative word. Large paintings, huge mirrors and major design. I fe

lt as though I was in Paris, not New York. This presentation was the way fashion should be shown. A total atmosphere that supports, elevates and celebrates the art of Couture. It was thrilling to sit there and take it all in.

There was a very clever rhythm to the show. The first looks were luxe sport. Wool jersey dresses with subtle linear patterns achieved with pin tucks came one after the other, each one a variati

on on a theme. That surface treatment was a leitmotif that ran through much of the collection only becoming more intricate and artful. Bias piping in contrasting organza and leather gave a third dimension to dresses, jackets and gowns. Still, this was a celebration of wool and silk jersey. A printed silk chiffon blouse over a double-faced cashmere skirt was understated luxury. From that point on the

heat was turned UP.White mink reversed to black leather. Silk moire was embroidered and quilted along the water marks and then reversed to sable. As rich as that sounds , there was a quietness to it all. Nothing screamed. Nothing ever approached the crass or vulgar.

The signature looks that Ralph Rucci is known for, mind boggling ensembles of double-faced wool puzzles were in evidence. What was strikingly different was symmetrical constructions were tossed to the wind. All of the most interesting combinations were now shards, brok

en pieces applied to a ground of net creating abstractions. These were metaphors for the world that we live in now; chaos. There were disparate elements melded together to create something unexpected. Planes of Broadtail inlaid with horse hair in a coat, then jacket

s culminating in the chicest shift on the planet. It was divine. Inf 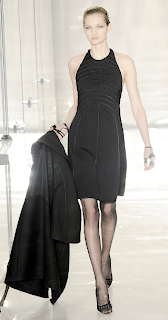 anta gowns were deconstructed looking like one thing coming and totally different from behind. Asymmetry in cuts, shape and surface detail made each piece a treasure. Lesage could not have done better, I'd venture to say that he had nothing to do with this work. These were the manipulations of his studio's hands. Probably, one of the most pleasing gowns came near the end. It was long sleeved with a deep V-neck made of matte b

lack sequins over laid like fish scales. It was roughed up with most laying flat and other sections turned up. Disordered, random, uncontrolled.

When all was said and done, Fran Lebowitz said to me that she's not s

een anything that came close other than YSL. She asked me why there isn't design in New York that touches this level. All I could say is

that too many designers don't try as hard to make something truly unique.She also asked me why I thought Anna Wintour wasn't there. I kept my mouth shut for a change. Fran said that it was a bad form for the most important fashion editor to ignore one of the greatest talents in fashion. Again, I nodded my head and struggled to stay silent. Ralph Rucci doesn't just push the envelope, he drop kicks it into the next stadium. This was an Olympic experience.

The crowd was a mix of the old guard and the new, the usual suspects and the totally unexpected. Deeda Blair sitting next to Nick Ashford rapt in conversation. Patti Smith and Susan Guttfreund. Whoopi Goldberg

and Martha Stewart. Fluff Chance and Cathy Horyn. Andre Leon Talley and everyone else. I overheard Deeda Blair say to Nick Asford after the finale that she wanted to see more; she wasn't ready to go.

I just wish you all could have been there. Yes, it's not for everyone but Ralph Rucci is one of the greatest national treasures we have. His legacy will live on long after we've all exited the building.

Who knew Anna was such a hater? Rucci is at a whole other level

Ralph Rucci is the absolute best. The workmanship is flawless, and he has earned evry bit of respect and recognition that I hope he gets this season. All I can say about Anna is that I question her judgement in missing the most important show of the season.

Rucci has been ignored because instead of catering to youth, sex, glamor, what's hip, he practices elegance and refinement. Also, I suspect that his clothes don't photograph so well. Some people design for the client, some for the camera. He does things the old-fashioned way.

Anna and her ilk are rendered obsolete by this media organ -- the internet. Her importance, while great in the past, is dwindling down to nothing at a dizzying pace because of people like The Emporer's Old Clothes. It no longer matters what she covers or not. Nor does the mafia of which she is a part matter, so much, any more.

This Rucci is utterly brilliant; a master of his craft and artist in the word's most base sense -- his medium is fabric.

Pay attention and appreciate because there is something here all should aspire to.

Excellent insight. I've shared this with others. Keep up the good work. Your writing is great.

"As I've said before, Ralph Rucci always delivers." This collection was spectacular, Who cares if Anna wasn't there, Vogue isn't the only magazine on the planet. Just as long as the boutique owners, luxury store owners and loyal customers place orders, who cares? I like Harpers Baazar and L'Official magazines anyway because they are geared toward women of all ages.

I agree with romanrose. I own a few of Ralph Rucci pieces and they are indeed stunning. I guess the problem here is that two eilist worlds are clashing, Anna and Ralph. Rucci is a lovable snob in his own way and his clientele is beyond the vogue demographic. I guess he just never bowed down to Anna the way she would have wanted. Another matter is the wearability and price point. These are clothes to be worn by people who have limousines and private planes, not at all for every day, not for a working woman. Even though his clothes are amazing, they seem a little bit too grown- up and regal. At the end of the day, something for a real connoisseur and there are not many of those around.

This is a designer that should be worn by women when they finally grow up...flawless detail, sumptousness that is elegant and yet easy and a cut that is sublime.
Bravo Ralph Rucci...delicious

i have never seen great refinement of taste in a designer since balenciaga et al... his clothes are a steady stream of refining, distilling and perfecting a singular look without being boring.

Anna Wintour should be delighted and equally supportive that an AMERICAN can conjure such creations...

The beauty of this guy besides his
design work is that he has done so w/o the establishment, meaning LaWintour. Anytime someone can do that, he gets my vote, let alone having it for doing such beautiful work.