The Prime of Mr. John Bartlett 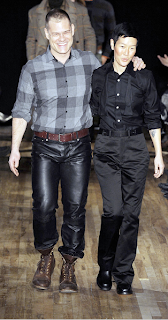 No wind, nor rain, nor blizzard of epic proportions can slow down that force of nature known as Fashion Week! Tonight was the perfect example of intrepid Fashionators coming in search of the new and the now. John Bartlett's Fall 2010 Collection was more than new and now, it was tremendous. If a rich imagination mixes with technique and vision and is leavened with experience you can end up with something truly remarkable. That's exactly what John delivered tonight.

He took us on a hunting weekend in the country. Imagine Sandringham or Chatsworth only not then but today. Men and women together, dressed for the shoot in tandem. No silly gowns and unwieldy hats with veils but luxuriously rich soft tweeds, Norfolk-ish jackets over leather shirts and vests finished with Frye boots...Yep, Frye boots.There wa

s one beautifully cut skirt in grey with a loden leather shirt. Just one. Other boots resembled laced up field boots for riding, there were sensible brogues and boots that resembled those worn by the British soldiers of WW1. That was just the first taste we had of the wom

The first man out was in the most delicious butter, brown and rust checked double-faced cashmere overcoat which swept down to his calves. That coat was so handsomely tailored and generous in its sweep that I barely saw what was underneath. This one look said everything about John's skill, taste and experience. Bartlett is a mature designer in full command of his powers. It was a lesson on what makes one designer's message different from an other's

pretensions. These men marched one after the other in countless variations on a romantic theme . From the beater to the natty guest to the host of the house party , all

were coolly turned out in wools, tweeds,leather, corduroy,satin and more tweed. The Prince of Wales was a portal for a look that was totally fresh.Greys, loden green leathers, browns and black. Sweaters were in rich orange and smart, subtle argyle patterns of charcoal and black.

wish for? Jenny Shimizu was his muse. She strode nobly down the runway in black sateen from top to bottom. Another striking blonde wore killer black leather jodphurs. Edwidge took control of the runway in a beautiful navy Alpaca top coat,navy Fisherman knit sweater and sleek black leather pants. That was the art and science of this show. We saw all body types and a range of ages that were all perfectly suited to these clothes. No gender gaps just all inclusive.You could imagine the guests motoring in and others arriving by motorcycle. Side cars and Hispano Suizas. Referencing the past and catapulting it to the now.

Men and women wore knickers but without knee socks, bare calved sporting paddock boots. The strength and beauty of fit bodies were proudly displayed. Short sleeved leather shirts and tees showed bodies primed to face the rigors of today and not shrouded in for

mality or modesty. There wasn't one look that I wouldn't have craved and from the looks of it, so did the rest of the audience. Bartlett has had a stellar career peppered with ups, downs, ins and outs. From a career at the top, stints at Byblos, Liz Claiborne, his own boutique and now a return to the larger market. Key retailers like Barneys and 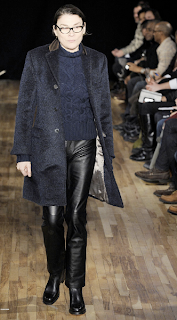 others braved the sto

rm to get a first look at his re-emergence to the big stage. No one left disappointed, all appeared not just stimulated but satisfied.

. As it should be. Bartlett is in his prime and it's a wake-up call to the others.
Posted by Fluff Chance at 8:37 PM