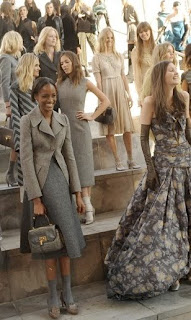 I was feelin' lucky tonight . I was sure I'd won the Trifecta, but Jason Wu slithered past the 2 horses on the outside, the Mighty Gurung and Altuzarra to inch ahead by a nose. Well, there's nothing more prestigious than that coveted award and I applaud any fortunate soul to be awarded one. Perhaps the only thing more exciting than winning one is perh 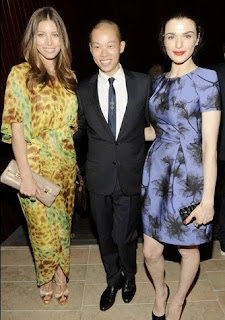 aps winning 3 or 5, but seriously, Bravo to all who were awarded. This business is about 90% hard work ,5% glamor/perks and the other 5% you're asleep. Anyone lucky to be nominated is batting a 1000. 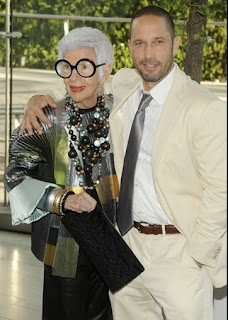 Tom Ford probably reached his quota(5 awards) which was good for Rag and Bone who took home best Menswear. Marc Jacobs, who thanked Bloggers and his partner in the biz, Patrick Duffy, won for best Womenswear, which I predicted along with Alexander Wang's win for the Swarovski top award for 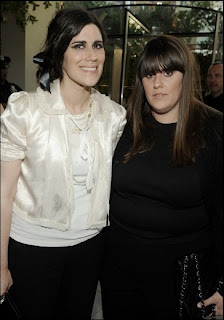 Accessories. It just goes to show you that ugly has taken a front row seat to pretty. I heard that Pretty was turned away at the door...something about not being on the Guest list. But that's not a surprise either, considering Desiree Rogers was temping as the Hostess checking in guests tonight. A big deal was made over Wi-Fi being provided for bloggers and twitterers to broadcast throughout

the evening's proceedings. My question is Who in the Blogging world was invited? I'm transmitting from my ultra exclusive front row seat in the VIP section of my living room in Brooklyn Heights with Housewives of New Jersey on, just to keep me honest!

Sure enough, Fashionista, committed the unspeakable by referring to Alexander McQueen as "Lee". That brand of presumption is in such poor taste and beyond the limits of decorum. Again, I'm not surprised. They banned me from commenting on their blog. Their brand of familiarity is contemptible. The pics of the guests will flood the Internet any minute. SJParker passed on her shopworn

Halston for a shot at a couture McQueen designed by the new creative director, Sarah Burton. There was a presentation on stage of his last works when his Special Tribute Award was announced. That was probably the most powerful moment of the evening.

I hope your favorites won and for those who didn't , it's fantastic to be in such rare and glamorous company just being nominated. Now, back to the publicity machine, I mean the sewing machine.....
Posted by Fluff Chance at 10:37 PM

What is Jessica Parker wearing, my god, have they all gone nuts ? Who are those " girls " ?
Lately I have been having this really bad feeling: we are watching the last moments of Rome.

By far, the most interesting of this award show was the NY Times article saying the young are trying to overthrow the old keepers at the gate. Now that is worthy of a reaction ! So tired of Jessica Parker around town as if she is the contemporary Babe Paley. And Thom Browne is Pewee Hermann on 7th Ave. No self- respecting businessman would go for the boy scout nerdy look.