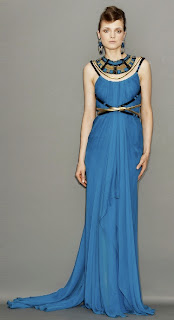 Well, Resort2011 for Marchesa might as well be the trotting of the turkeys. Spain has the running of the bulls, New York has wild turkeys; marauding, unabashed and untamed turkeys. I've always thought Marchesa had the glamor game down. That was probably because I tended to see that collection from the corner of my eye. When I turned to focus, looking straight at it, I was as disturbed by it as I am by

the rampaging foul that has come close to out numbering the pilgrims who come to East Hampton and neighboring hamlets to worship. Sounds harsh, I know, but this collectio

n was one gigantic , queeny mess. Nothing about it said Resort other than the program.

From the top, I was reminded tha

t Georgina Chapman is the child bride of Harvey Weinstein, of movie mogul fame, not to mention the savior of Halston and it's Bad Seed little sister, Halston Legacy. The first looks were straight off the back lot. Cleopatra and Mata Hari along with a chorus line of showgirl 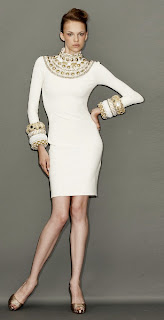 s in costumes parading as chic dresses and gowns. Had those creations been viewed from a safe distance , they'd have exuded the hauteur and command

of an Adrian, Edith Head, perhaps a Poiret if the lighting was just so and in concert with a very effective fog machine. Marchesa has been so successful on the red carpet with so many important actresses of late, I was frankly disappointed to see such pedestrian clothes.

The first exit is a turquoise gown suitable for Cleopatra entertaining on the Nile. It approaches suit 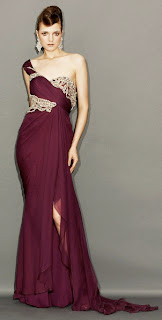 ability for entering the gates of Rome but is a little short on gold. The collar piece is all chunky turquoise stones and other bits of this and that with a draped column that reads more as an afterthought. I almost thought they'd rather have shown Miss Cleo in only a jeweled collar, cuffs, a bad wig and naked. It was the damn censors who insisted they switch the asp for a gown. Another variation on that overwrought theme appears later in white, which was more effective, as

the jeweled collar is obscured by a swath of silk chiffon looping through it and concealing the better or worse part of it, depending on your taste. A lovely confection comes after in russet orange layers of satin faced organza. It's one dress along with a few more that look somewhat current. Another was a beautifully draped short printed strapless with only a scattering of jet crystals. It was pure dressmaking beauty with subtlety as its primary detail. A claret silk chiffon gown was also effective with masterful workmanship and a modicum of sparkle; a very chic Mother of the Bride. With headpieces like snoods, it often looked like 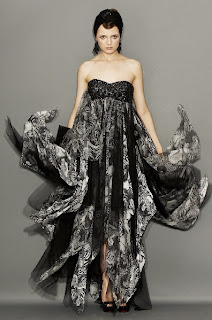 Harvey gave the team the keys to the Costume archives of RKO and let them loose. There was nothing original and nothing that expressed the idea of subtraction. It was more, more and then just a lot more. Big faux-jeweled cuffs were attached to dresses and gowns on a single sleeve or both. They even managed to get lost in Paris, lassoing in a couple of wildly colored versions of YSL fringe skirted dresses from his Africa collection. Nice homage, but not in Kraft "Vermont"cheddar yellow.

The mood shifted from the antique to the semi modern with crystal pleated lurex chiffon cocktail and evening gowns. They looked like middling quality, poly chiffon, the sort Mary McFadden used with brilliantly tight Marii pleats.(God, I miss Mary. She was the life and death of a party.) This pleating was too large and showed the fabric for wh

at it was; inexpensive, with a lot of beads and twists to camouflage its lack of quality.They've worked this crystal pleating over and over the last few seasons and it's bled into Halston Heritage on SJParker at the Costume Institute Ball and in the sequel of Sex..... It's prom wear at demi-couture prices. Other offerings were restrained and even lovely, like a little one shouldered black jersey dress with one jeweled cuff. The technical know how is in place at the Marchesa studio. It's only channeled towards high voltage looks that have little bearing to real life glamor; only the strain tha

t's epidemic in Hollywood and Cannes.

I remember one night at a screening of a Weinstein film, "The Reader" where he and Georgina were there working the room. I saw her at a distance and could not stop watching her. She w 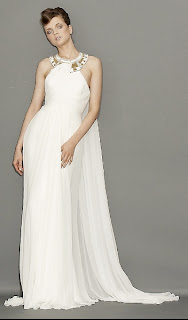 ore a metal thread embroidered shrunken matador's cape over a very short beautiful dress. Her legs and body were as sleek as a jaguar. She worked the room(theater) from front to back, side to side like an industry pro. Harvey just stood back like a large toad and let her work. What struck me was not so much their utter lack of chemistry, but her incredible beauty. She was by far the most beautiful woman there, towering over her court and oozing charm. I thought at that moment, "here's a great designer", but too often there are those who are brilliant at making and others at wearing.

That company is a hodgepodge of items, like a Kleinfeld's for "occasion clothes". The Bar Mitzvah mother's go-to outlet or a prom girl or over indulged "sweet 16's" Mecca. The most blatant shortcut was the "Lanvin Pouf", the ubiquitous one-shouldered popover dress that has turned up on way too many runways. When you start to mistake one for the other, it's time to take it from the top.
Posted by Fluff Chance at 8:21 PM

You nailed it ! ( in its coffin) RIP Marchesa.

I thought the same thing about the yellow dress resembling YSL's "Bambara" dress from his African Collection.

Gobble, Gooble, Gooble. These turkey's are not even fit for the dreaded turkey stew. Me thinks that someone was peeking into Simplicity pattern books. So sad to see this line limping along.

The irony is that many of these will be bought and worn. This collection may not be classy, but it is as commercial as all get out. Especially to her market.

From Keebler Holly
I have been following Fluff, but can't comment on the blog, don't have google email. You were spot on about the Marchesa collection - it seemed as if they didn't have a destination for the collection. One minute they were channeling flappers, then Grecian goddesses. The Bryan Reyes collection was a waste-who would buy this stuff?, except for the black pieces that you mentioned. Barbara Tfank- loved the robin egg blue dress, and the little jacket. The numero uno however, is Chris Benz - this is a collection worthy of anyone's hard-earned dollars. Liked everything, except the floral prints, not too crazy about those. That's my two-cents. Have a great day. Are you coming to Kentucky in September for the big horse show? keebler