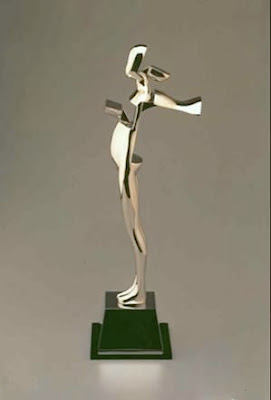 When I was about 10, there was a show on TV on Sunday mornings called, "Community Auditions". It was so abysmally stale, I was hooked on it like a follower of "High Society". The jingle was as rank as the acts:

I watched some little girl in a tutu on toes shoes complete with taps twirling a baton while doing an interpretive dance, en pointe, (while tap dancing) to "The Star Spangled Banner". Yes, it was that level of entertainment, but somehow, I still believe it informed my taste and eye for the career in which I would later shine. Well that show comes to mind when I think of tonight's equivalent of the Oscars for the Design stars of today, tomorrow and forever.

The awards for journalistic greatness to Kim Hastreiter of Paper Magazine (well earned and much deserved), Iman for Style Icon (why/what/so???) A Special Tribute to Alexander McQueen for his brilliance, otherworldly contributions and influence ( if someone refers to him as Lee, which was his first name only used by his closest friends, I'll choke), The Geoffrey Beene Lifetime Achievement Award to Michael Kors which seems a bit premature but not totally far fetched, and so on. Those "poke and stroke awards" are all a necessary ingredient to raise the level of entertainment and bring in the crowds and funds for the many charities that they support.

My interest is piqued by the Swarovski Awards for Womenswear and Accessories. Those categories are the "maiden races" for the young colts and fillies new to the track,though some are well past the age of 3 or 4 year olds. There's one in the race that's won on 5 separate occasions going all the way back to 1995: Tom Ford. It's like the fourth leg of the Triple Crown. Some of these ponies have as few as 1 leg and others as many as five, I'll leave that to your imaginations. The repetition of names from previous years for the same categories is always a source of amusement. It's a bit like musical chairs; random and predictable. Even those of us who were not math geeks can figure the odds if you know the tiniest thing about the criteria.
For the Swarovski Womenswear award there are 3 nominees, 2 of whom have dressed the
First Lady, one of those 2 most recently and the third is now carried by Mrs. Obama's (un)official stylist, Ikram Goldmun of Ikram boutique in Chicago. Prabal Gurung, a very talented man, specializing in evening wear, a past Assistant at Blass, whose collections have received greater and greater praise, successively, is in a prime position close to the rail to take this race. The only thing that might hamper his lead is that he's known for designing evening which has rarely won the day with the exception of Tuleh several years back. As beautiful as his clothes are, Joseph Altuzarra poses a formidable challenge for the simple reason that he is a brilliant young Sportswear designer which is consistently embraced by the voting body. His work is both original, technically precocious and extremely popular with the stylists and editors. I would have handicapped him to win until Prabal got the Obama Bump a few weeks back which increased his visibility and chances considerably. The "Obama Bump" is not for nothing. The other horse (a pony in my estimation) in this race is Jason Wu. We all know too well his story: "Obama Big-Assed Bump" with the less than inspired Inaugural gown, all sorts of inflated stories about the instant empire from that fateful gown and the collections that have come up lame ever since. Few people talk about his disqualification from the Parson's Stakes for unsportsmanlike behavior. When you add up these statistics, he becomes the dark horse (pony) in this race. I place my bet on Prabal Gurung. It would be fantastic to see someone who's not only talented, but who's put in the time to come to this race in shape, fast, graceful and fresh.

The Menswear of the Year nominees are a very interesting mix. There's Tom Ford who should skip these categories and just be given the Geoffrey Beene Lifetime Achievement award considering he's won in 5 categories dating back to '95,'01, '02, '04, and most recently for Menswear Designer of the Year in 2008. This becomes redundant, except that this time around his reputation not only precedes him, but he's got an Oscar nominated feature film to add to his list of achievements.That's one thing the competition failed to do. Michael Bastian follows the Ralph Lauren/Tommy Hilfiger formula in that he's a lapsed stylist who has created a business by "re-interpreting" classic style and selling it at absurdly high price points. They are familiar clothes, with a tiny twist that very few can afford....kind of an (un)common man's Thom Browne. Rag and Bone rounds out that race. They won in this category 3 years ago which may or may not help them. They are wildly popular, editorially and in the retailing world which could be a magic combination. My bet is, nevertheless, on Tom Ford. The glossiness of his coat, the way he instinctively knows where to position his head and haunch for the photographers is hard to discount or ignore. Let's face it, he could race in the opposite direction and still get to the finish line with time to spare for hair and makeup.

The Swarovski Accessory Award is the least interesting and possibly the most easily to predict. If you feel as though you've got the previous categories figured out , you might as well go for the Trifecta with this one. Eddie Borgo, Dana Lorenz and Alexander Wang make up the nominees. Eddie Borgo has collaborated with Marchesa (why haven't they been nominated, ever? Oh, I forgot they do STRICTLY Evening), Philip Lim and Joseph Altuzarra. His jewelry is very aggressive and interesting. Dana Lorenz does work that is both glorious in its use of precious stones and metals and inglorious in its more mundane elements. Then there's Alexander Wang. In accessories, Wang is best known for his Dream boot. If the stylists adore it and pull it repeatedly for all sorts of shoots and the editors and their magazines shoot that boot again and again, then I think the race is his to lose. Alexander Wang's trajectory has been atomic for the last few years with an award last year and countless lesser awards and honors over the past year or two. He's clearly a track favorite. It's no small feat that he's also nominated for Womenswear Designer of the Year along with Marc Jacobs and Donna Karan. This category is very hard to handicap. It could simply be a musical chairs race. If that's the case, I would bet on Marc. He's smart, fast, buff and if aerodynamics have any part in the time clock, he's got the least amount of hair to slow him down.

There are other races being run tonight which I'll re-cap when all is said and done. These entries are the ones that are the most anxiously awaited and hotly contested.In these races you can be a horse with an unimpeachable pedigree or have only one speed(fast) and little breeding. The outcome has as much to do with your ability to show and place, as it does the folks in the grand stands.
Posted by Fluff Chance at 1:10 PM

I have a soft spot for Iman because she is beautiful and always looks polished and terrific. Not sure that equates to being an influential stylemaker, but I've never seen her stuff on QVC. Guess I'd rather see Iman be honored than someone from Hollywood.

As for Alexander Wang's accessories having been nominated, make me laugh! His handbags bring to mind Simon Doonan's comment (in one of his books) about oversized leather bags reminding him of elephant testicles. The fall ones seem to rip off Tod driving moccasins, though maybe there is something practical about the little rubber feet everywhere. Practical, but not attractive.

Fashion's Oscars...Hmm...but yes the CFDA's are very much like the Oscars in that they constantly seem to award those who are the most hyped rather than the most deserving. Marchesa never being nominated (EVER?!?) was it for me.

To present awards annually is absurb. How can worthy candidates be in such great supply ? The value of such awards is diminished by such frequency. The general public realizes this, and knows true worth and awards are as opposed as any two things can be. Its an excuse to market fashion, as the Oscars have become as well.